Fish Oil Enriched in EPA, but Not in DHA, Reverses the Metabolic Syndrome and Adipocyte Dysfunction Induced by a High-Fat Diet
Previous Article in Journal

Asprosin—A Fasting-Induced, Glucogenic, and Orexigenic Adipokine as a New Promising Player. Will It Be a New Factor in the Treatment of Obesity, Diabetes, or Infertility? A Review of the Literature
Previous Article in Special Issue

The increasing impact of obesity on global human health intensifies the importance of studies focusing on agents interfering with the metabolism and remodeling not only of the white adipose tissue (WAT) but also of the liver. In the present study, we have addressed the impact of n-3 PUFA in adipose cells’ proliferation and adipogenesis, as well as in the hepatic lipid profile and morphology. Mice were induced to obesity by the consumption of a high-fat diet (HFD) for 16 weeks. At the 9th week, the treatment with fish oil (FO) was initiated and maintained until the end of the period. The FO treatment reduced the animals’ body mass, plasma lipids, glucose, plasma transaminases, liver mass, triacylglycerol, and cholesterol liver content when compared to animals consuming only HFD. FO also decreased the inguinal (ing) WAT mass, reduced adipocyte volume, increased adipose cellularity (hyperplasia), and increased the proliferation of adipose-derived stromal cells (AdSCs) which corroborates the increment in the proliferation of 3T3-L1 pre-adipocytes or AdSCs treated in vitro with n-3 PUFA. After submitting the in vitro treated (n-3 PUFA) cells, 3T3-L1 and AdSCs, to an adipogenic cocktail, there was an increase in the mRNA expression of adipogenic transcriptional factors and other late adipocyte markers, as well as an increase in lipid accumulation when compared to not treated cells. Finally, the expression of browning-related genes was also higher in the n-3 PUFA treated group. We conclude that n-3 PUFA exerts an attenuating effect on body mass, dyslipidemia, and hepatic steatosis induced by HFD. FO treatment led to decreasing adiposity and adipocyte hypertrophy in ingWAT while increasing hyperplasia. Data suggest that FO treatment might induce recruitment (by increased proliferation and differentiation) of new adipocytes (white and/or beige) to the ingWAT, which is fundamental for the healthy expansion of WAT. View Full-Text
Keywords: obesity; fish oil; beige adipocytes; liver; AdScs obesity; fish oil; beige adipocytes; liver; AdScs
►▼ Show Figures 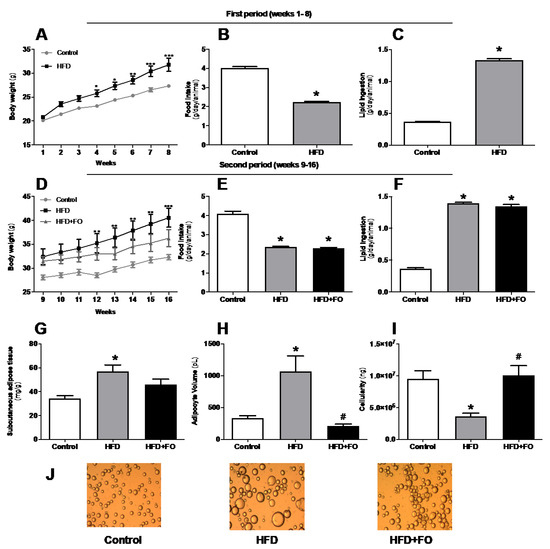