Fish Oil Enriched in EPA, but Not in DHA, Reverses the Metabolic Syndrome and Adipocyte Dysfunction Induced by a High-Fat Diet

This study aimed to investigate the effects of two commercially available fish oils (FOs) containing different proportions of two omega-3 fatty acids (FA), eicosapentaenoic acid (EPA) and docosahexaenoic acid (DHA), on the metabolic and endocrine dysfunctions of white adipose tissue resulting from obesity. Male C57BL/6J mice, 8 weeks old, received a control or high-fat diet (CO and HF groups, with 9% and 59% energy from fat, respectively) for 8 weeks. The next 8 weeks, the HF group was subdivided into HF, HF+FO/E (HF+5:1 EPA:DHA), and HF+FO/D (HF+5:1 DHA:EPA). Supplementation was performed by gavage, three times a week. All groups that received the HF diet had lower food and caloric intake, but a higher fat intake, body weight (BW) gain, glucose intolerance, and a significant increase in inguinal (ING), retroperitoneal (RP), and epididymal (EPI) adipose tissues when compared to the CO group. Additionally, HF and HF+FO/D groups showed insulin resistance, adipocyte hypertrophy, increased lipolysis and secretion of TNF-α, resistin and IL-10 adipokines by ING and RP adipocytes, and adiponectin only by the HF+FO/D group in ING adipocytes. All of these effects were completely reversed in the HF+FO/E group, which also showed partial reversion in BW gain and glucose intolerance. Both the HF+FO/E and HF+FO/D groups showed a reduction in ING and RP adipose depots when compared to the HF group, but only HF+FO/E in the EPI depot. HF+FO/E, but not HF+FO/D, was able to prevent the changes triggered by obesity in TNF-α, Il-10, and resistin secretion in ING and RP depots. These results strongly suggest that different EPA:DHA ratios have different impacts on the adipose tissue metabolism, FO being rich in EPA, but not in DHA, and effective in reversing the changes induced by obesity. View Full-Text
Keywords: obesity; omega-3 fatty acids; insulin resistance; eicosapentaenoic acid; docosahexaenoic acid obesity; omega-3 fatty acids; insulin resistance; eicosapentaenoic acid; docosahexaenoic acid
►▼ Show Figures 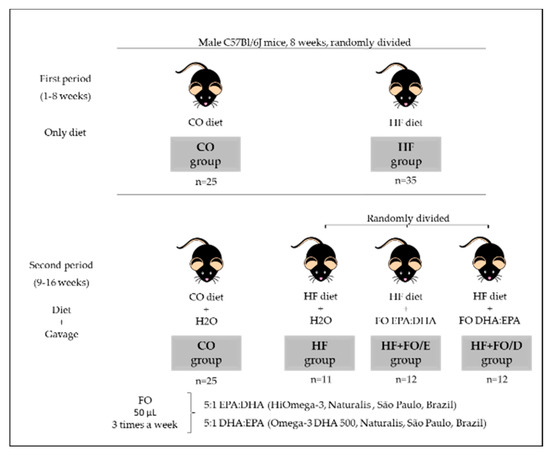