Cow’s Milk Protein Allergy as a Model of Food Allergies

A Comparison of Sugar Intake between Individuals with High and Low Trait Anxiety: Results from the NutriNet-Santé Study

(1) Background: Dietary carbohydrates are likely correlated with mental health in general, and with anxiety in particular. Our aim was to investigate the cross-sectional relationship between trait anxiety and carbohydrate (especially sugar) intake in a large sample derived from the general French population. (2) Methods: The analyses included 20,231 non-diabetic adults enrolled in the NutriNet-Santé e-cohort, who had completed the trait anxiety subscale of the Spielberger State-Trait Anxiety Inventory (T-STAI, 2013–2016) and who were subsequently divided into high and low trait anxiety groups (T-STAI cut-off of 40 points). Sugar-rich food and macronutrient intake was calculated from ≥3 self-administered 24-h dietary records. The association between trait anxiety and carbohydrate intake was evaluated by ANCOVA according to age category (<45 and ≥45 years). (3) Results: In the full sample, 7942 (39.3%) individuals fell into the high trait anxiety category. They were more likely to be women (82.2% versus 69.2%; p < 0.0001) and younger (mean age 51.6 versus 55.1 years; p < 0.0001) compared to the low trait anxiety group. In fully-adjusted models, high-anxiety individuals aged under 45 years had significantly higher mean consumption of added simple sugars (43.9 versus 42.3 g/d; p < 0.0007), whereas those aged over 45 years with high trait anxiety had significantly lower mean consumption of fruit (214.0 versus 219.5 g/d; p < 0.02) compared to their low-anxiety counterparts. (4) Conclusions: This cross-sectional study revealed modest age-specific associations between anxiety status and sugar intake among adults. Prospective studies with representative samples are needed to explore potential bi-directionality of the observed associations. View Full-Text
Keywords: diet; dietary sugars; carbohydrates; anxiety; mental health; epidemiological study diet; dietary sugars; carbohydrates; anxiety; mental health; epidemiological study
►▼ Show Figures 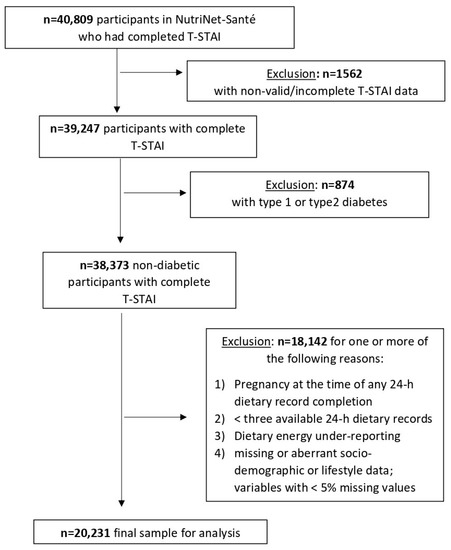