Is Dietitian Use Associated with Celiac Disease Outcomes?

Celiac disease is a chronic, immune-mediated disorder, characterized by malabsorption of nutrients after the ingestion of wheat gluten or related proteins from rye and barley by genetically susceptible individuals expressing the human leukocyte antigen (HLA) class II molecules DQ2 or DQ8 [1] resulting in villus atrophy of the small intestinal mucosa. Prompt clinical and histologic improvement is observed following strict adherence to a gluten-free diet, and clinical and histologic relapse occurs when gluten is reintroduced [2]. Several extraintestinal manifestations, including anemia, osteopenia, neurologic symptoms, menstrual abnormalities, infertility, recurrent spontaneous abortions, growth retardation, dermatitis herpetiformis, aphthous stomatitis, dental defects, have been associated with celiac disease [3].
Eosinophilic esophagitis was first described in 1978 [4]; however, it became recognized as a distinct clinical entity in 1995 [5]. It is a chronic inflammatory primary disorder of the esophagus, presenting with dysphagia and symptoms mimicking those of gastroesophageal reflux disease, including vomiting, regurgitation, nausea and epigastric pain. This disorder is characterized by esophageal mucosal biopsy containing more than 15 eosinophils per high-power field (Figure 1) and absence of gastroesophageal reflux disease, as shown by normal pH monitoring or lack of response to high-dose proton pump inhibitory therapy [6]. 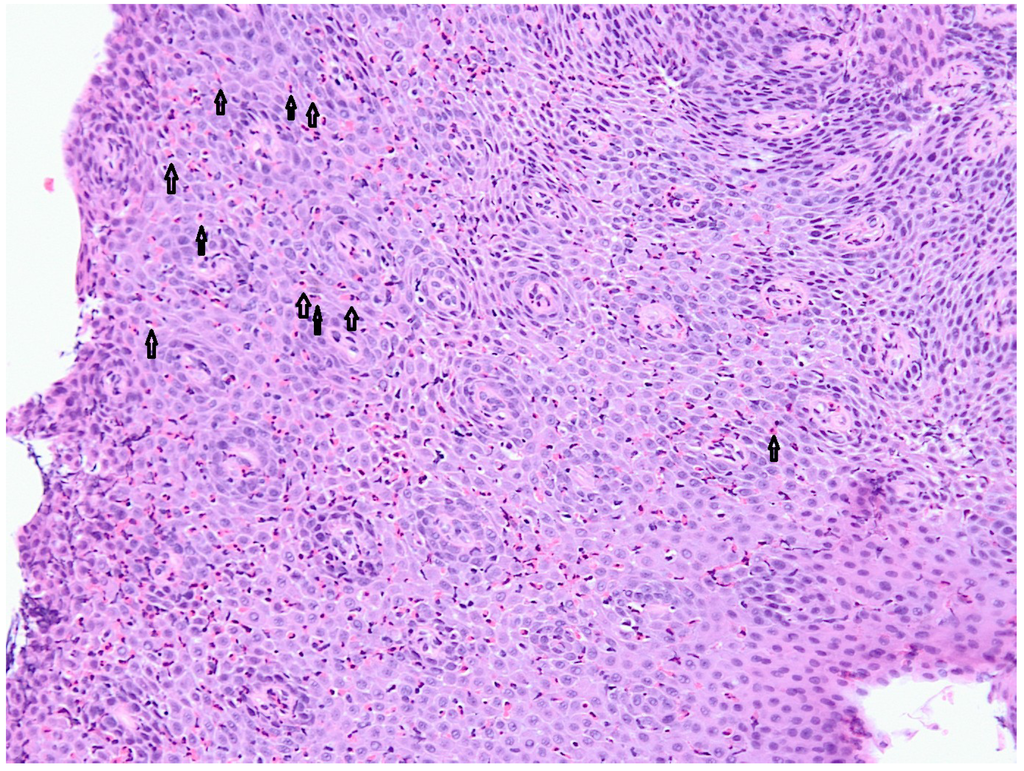 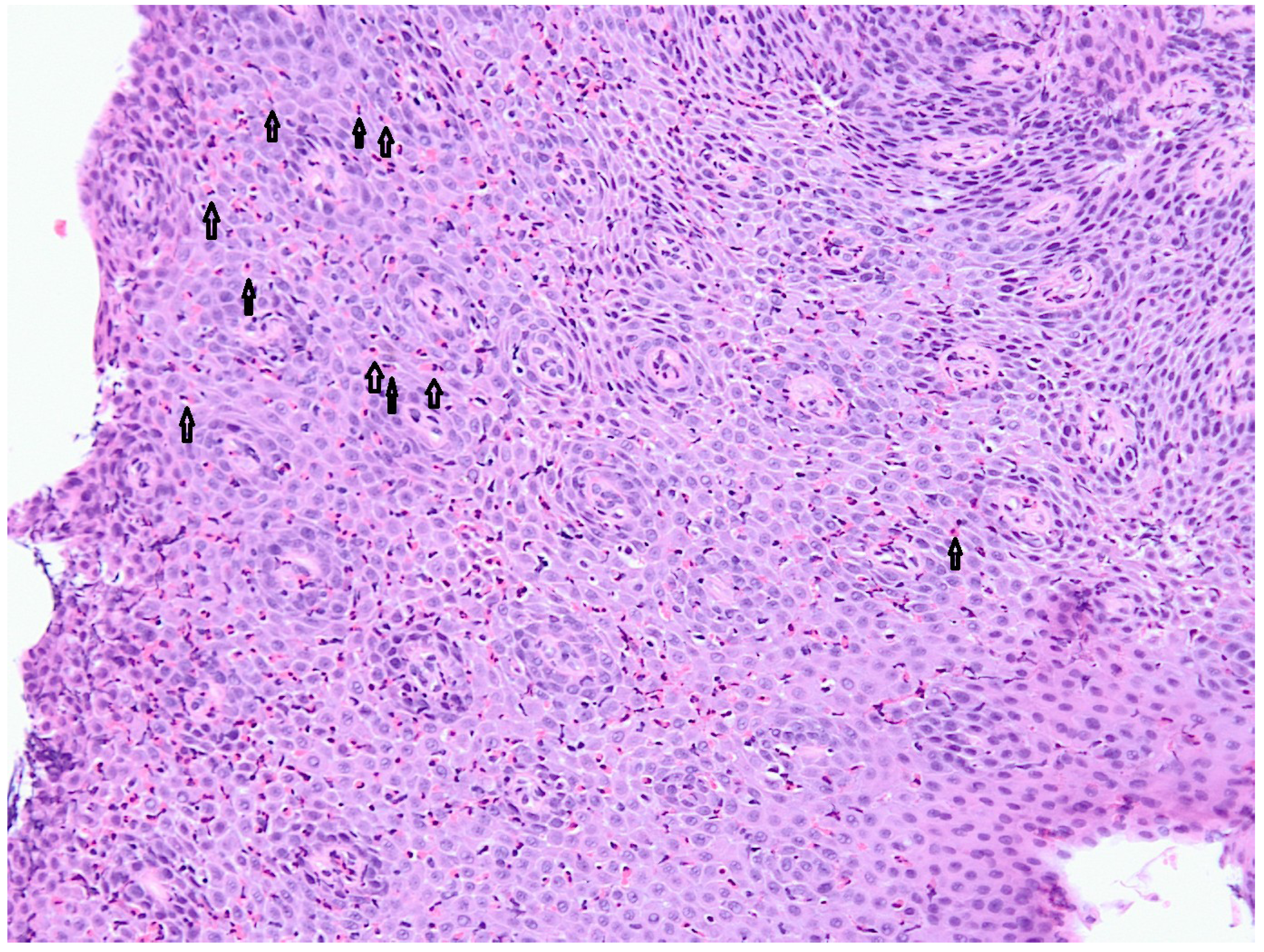 There are some classic endoscopic features including adherent whitish plaques, esophageal concentric rings, linear furrowing, but the esophagus can appear only slightly altered in some patients [7]. The squamous epithelium of the esophagus is normally devoid of eosinophils, but various disorders cause eosinophils to infiltrate the esophageal epithelium: parasitic infections, autoimmune disease, vasculitis, medications, gastroesophageal reflux disease [8]. When first described, eosinophilic esophagitis was believed to be a predominantly pediatric condition; however, it is now commonly diagnosed in adults as well as in children [9]. The clinical presentation of eosinophilic esophagitis may vary depending on age: younger children, generally present with non-specific symptoms of gastroesophageal reflux disease, abdominal pain or failure to thrive [10]; older children often present with dysphagia and esophageal food impaction [11]; however, asymptomatic low-grade counts of epithelial eosinophils (less than 15 eosinophils per high-power field) may be more common than has been estimated, but are of uncertain clinical significance [12]. A subset of patients with eosinophilic esophagitis responds to acid suppressive therapy, indicating some overlap between eosinophilic esophagitis and gastroesophageal reflux disease [6]; this is now considered as a separate entity labelled “proton pump inhibitors (PPI) responsive oesophageal eosinophilia” [13] In children, eosinophilic esophagitis has been shown to be associated with IgE- and non-IgE-mediated food allergy, and the majority of cases respond to elemental diets or specific food protein elimination [6]. By contrast, in adults the response to dietary interventions is less predictable, and the treatment more commonly relies on swallowed corticosteroid aerosols [6]. The poor response rate to dietary interventions in adults may be due to a lower prevalence of food allergy, and sensitization to inhalant allergens may play a more significant etiological role [6]. The data about the incidence of eosinophilic esophagitis range from 0.5 cases per 10,000 [14] to 1 in 10,000 in Ohio, USA [15] and the prevalence range from 0.89/10,000 in Western Australia [16] to four cases per 10,000 in Ohio, USA [15] and 5.5 cases per 10,000 in Olmsted County, Minnesota, USA [17]. The incidence seems to be increasing in both adults and children, though it is as yet unclear whether this is solely attributable to increasing awareness and detection of the disease or whether it represents a genuine phenomenon [18]. There is a male predominance, with 76% of adult and 66% of pediatric cases being diagnosed in males [6]. Since both celiac disease and eosinophilic esophagitis are caused by aberrant, but distinct, immune responses to ingested antigens and can be responsive to food elimination diets, the objective of our study was to verify if there is an association between these two conditions.

Articles regarding the association of these two diseases were identified through MEDLINE search using the terms “celiac disease or celiac sprue or gluten AND eosinophilic esophagitis”. The search was also performed using reference lists from published articles. The titles of these publications and their abstracts were scanned in order to eliminate duplicates and irrelevant articles. The final date of the MEDLINE search was June 19, 2013.

Both celiac disease and eosinophilic esophagitis are distinct clinical entities except for a few minor similarities. Celiac disease is a Th1 mediated disorder which aligns with autoimmunity, triggered by the ingestion of food containing gluten and affects females:males at a ratio of 2:1 [29]. By contrast, eosinophilic esophagitis has been shown to be a Th2-mediated disorder, which is triggered by exposure to dietary allergens causing infiltration of the esophageal mucosa by T lymphocytes, mast cells and eosinophils and predominates in males, with a 3:1 ratio to females. There is also an overexpression of eotaxin-3 and interleukin-5 [6] in the latter. Affliction of 8% of first-degree relatives of patients with celiac disease is similar to that reported in 10% of first-degree relatives of patients with eosinophilic esophagitis [30]. The genetic basis for celiac disease (i.e., HLA DQ2) is well established and differs from that of eosinophilic esophagitis [25] whose etiology is far from clear, but in nearly 50% of the cases, it is associated with an allergy to food or to aeroallergens [15]. In children, IgE-dependent mechanism for eosinophilic esophagitis is supported; for instance, it was shown that affected patients have IgE sensitization to a wide variety of foods, although not all patients had evidence of food-specific IgE [31]. In one study, a higher level of IgE sensitization to food allergens was observed in patients with eosinophilic esophagitis alone compared to patients with both pathologies, and this led the authors to hypothesize that patients with both pathologies have elevated esophageal eosinophils for reasons different from allergy, with a significant clinical and histological remission on gluten-free diet [22]. Increased intestinal mucosal permeability secondary to celiac disease has been suggested as a contributing factor in the development of atopy [32,33]. Damaged intestinal barrier may expose the local intestinal immune system to macromolecules and lead to transport of these undigested proteins to other body sites, hence facilitating development of hypersensitivity reactions in a predisposed individual in and away from the gastrointestinal tract [23]. By contrast, in adults, the response to dietary interventions is less predictable, and treatment more commonly relies on swallowed corticosteroid aerosols [6]. The clinical significance of eosinophilic esophagitis as an incidental finding is uncertain; if the main treatment goal is suppression of clinical symptoms, asymptomatic eosinophilic esophagitis may not require any therapy, but as the natural history of eosinophilic esophagitis in largely unknown, it is unclear what proportion is at risk of developing esophageal strictures and dysphagia in the long term [34].

In summary, although there are fundamental differences in the pathophysiological mechanisms involved in eosinophilic esophagitis and celiac disease, these conditions may coexist and the prevalence is higher than anticipated. Our review highlights the importance of obtaining routine esophageal biopsies in children undergoing endoscopy for diagnosis of celiac disease irrespective of whether the esophagus appears normal or abnormal at endoscopy; however, asymptomatic low-grade counts of epithelial eosinophils are of uncertain clinical significance.