Evaluation of Drinks Contribution to Energy Intake in Summer and Winter

The purpose of the present study was to investigate the effects of supplementation with a carbohydrate-electrolyte solution (CES) in active females during a prolonged session of submaximal running to exhaustion. Eight healthy active females volunteered to perform a session of open-ended running to exhaustion at 70% of their maximal oxygen consumption on a treadmill during the follicular phase of their menstrual cycle on two occasions. During each run, the subjects consumed either 3mL·kg−1 body mass of a 6% CES or a placebo drink (PL) every 20 min during exercise. The trials were administered in a randomized double-blind, cross-over design. During the run, the subjects ingested similar volumes of fluid in two trials (CES: 644 ± 75 mL vs. PL: 593 ± 66 mL, p > 0.05). The time to exhaustion was 16% longer during the CES trial (106.2 ± 9.4 min) than during the PL trial (91.6 ± 5.9 min) (p < 0.05). At 45 min during exercise, the plasma glucose concentration in the CES trial was higher than that in PL trial. No differences were observed in the plasma lactate level, respiratory exchange ratio, heart rate, perceived rate of exertion, sensation of thirst, or abdominal discomfort between the two trials (p > 0.05). The results of the present study confirm that CES supplementation improves the moderate intensity endurance capacity of active females during the follicular phases of the menstrual cycle. However, the exogenous oxidation of carbohydrate does not seem to explain the improved capacity after CES supplementation. View Full-Text
Keywords: running; exercise to exhaustion; follicular phase running; exercise to exhaustion; follicular phase
►▼ Show Figures 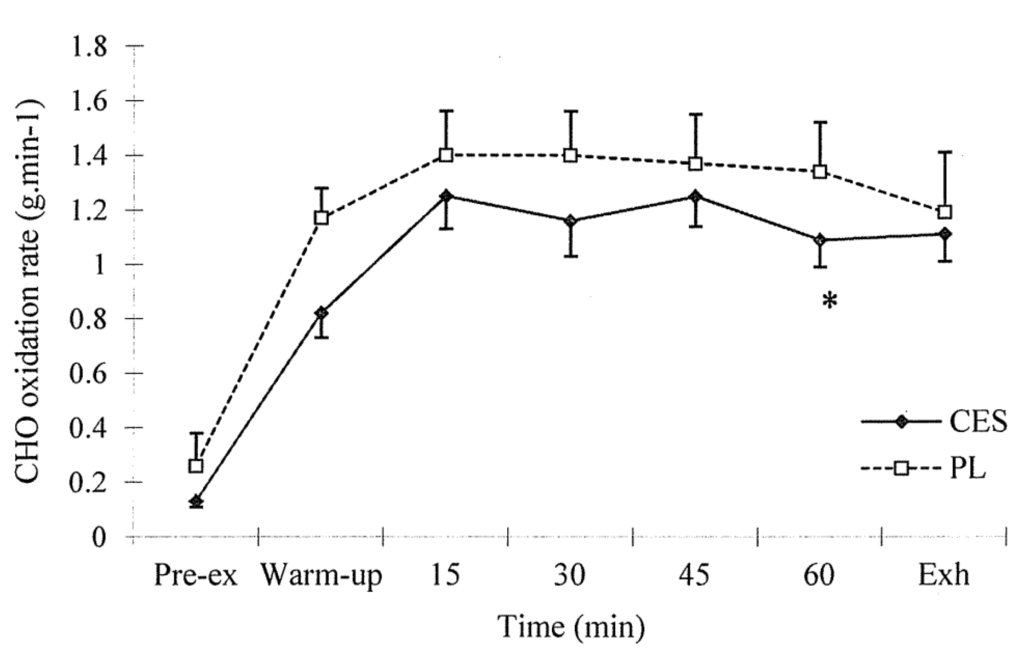