A Rapid, Sensitive, and Portable Biosensor Assay for the Detection of Botulinum Neurotoxin Serotype A in Complex Food Matrices
Previous Article in Journal

A New Conjugation Method Used for the Development of an Immunoassay for the Detection of Amanitin, a Deadly Mushroom Toxin

Development of an Immunoassay for Detection of Staphylococcal Enterotoxin-Like J, A Non-Characterized Toxin

Staphylococcal enterotoxins (SEs) are the cause of staphylococcal food poisoning (SFP) outbreaks. Recently, many new types of SEs and SE-like toxins have been reported, but it has not been proved whether these new toxins cause food poisoning. To develop an immunoassay for detection of SE-like J (SElJ), a non-characterized toxin in SFP, a mutant SElJ with C-terminus deletion (SElJ∆C) was expressed and purified in an E. coli expression system. Anti-SElJ antibody was produced in rabbits immunized with the SElJ∆C. Western blotting and sandwich enzyme-linked immunosorbent assay (ELISA) detection systems were established and showed that the antibody specifically recognizes SElJ without cross reaction to other SEs tested. The limit of detection for the sandwich ELISA was 0.078 ng/mL, showing high sensitivity. SElJ production in S. aureus was detected by using the sandwich ELISA and showed that selj-horboring isolates produced a large amount of SElJ in the culture supernatants, especially in that of the strain isolated from a food poisoning outbreak in Japan. These results demonstrate that the immunoassay for detection of SElJ is specific and sensitive and is useful for determining the native SElJ production in S. aureus isolated from food poisoning cases. View Full-Text
Keywords: staphylococcal enterotoxin; immunoassay; ELISA; food poisoning; superantigenic activity staphylococcal enterotoxin; immunoassay; ELISA; food poisoning; superantigenic activity
►▼ Show Figures 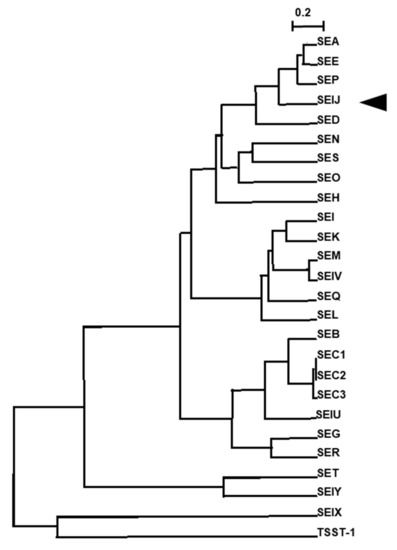