Transfer of Deoxynivalenol (DON) through Placenta, Colostrum and Milk from Sows to Their Offspring during Late Gestation and Lactation
Next Article in Special Issue

Coagulotoxic Cobras: Clinical Implications of Strong Anticoagulant Actions of African Spitting Naja Venoms That Are Not Neutralised by Antivenom but Are by LY315920 (Varespladib)

Snakebite is a global tropical disease that has long had huge implications for human health and well-being. Despite its long-standing medical importance, it has been the most neglected of tropical diseases. Reflective of this is that many aspects of the pathology have been underinvestigated. Snakebite by species in the Elapidae family is typically characterised by neurotoxic effects that result in flaccid paralysis. Thus, while clinically significant disturbances to the coagulation cascade have been reported, the bulk of the research to date has focused upon neurotoxins. In order to fill the knowledge gap regarding the coagulotoxic effects of elapid snake venoms, we screened 30 African and Asian venoms across eight genera using in vitro anticoagulant assays to determine the relative inhibition of the coagulation function of thrombin and the inhibition of the formation of the prothrombinase complex through competitive binding to a nonenzymatic site on Factor Xa (FXa), thereby preventing FXa from binding to Factor Va (FVa). It was revealed that African spitting cobras were the only species that were potent inhibitors of either clotting factor, but with Factor Xa inhibited at 12 times the levels of thrombin inhibition. This is consistent with at least one death on record due to hemorrhage following African spitting cobra envenomation. To determine the efficacy of antivenom in neutralising the anticoagulant venom effects, for the African spitting cobras we repeated the same 8-point dilution series with the addition of antivenom and observed the shift in the area under the curve, which revealed that the antivenom performed extremely poorly against the coagulotoxic venom effects of all species. However, additional tests with the phospholipase A2 inhibitor LY315920 (trade name: varespladib) demonstrated a powerful neutralisation action against the coagulotoxic actions of the African spitting cobra venoms. Our research has important implications for the clinical treatment of cobra snakebites and also sheds light on the molecular mechanisms involved in coagulotoxicity within Naja. As the most coagulotoxic species are also those that produce characteristic extreme local tissue damage, future research should investigate potential synergistic actions between anticoagulant toxins and cytotoxins. View Full-Text
Keywords: cobra; venom; antivenom; snakebite; coagulopathy; coagulotoxicity; tissue damage; varespladib; LY315920 cobra; venom; antivenom; snakebite; coagulopathy; coagulotoxicity; tissue damage; varespladib; LY315920
►▼ Show Figures 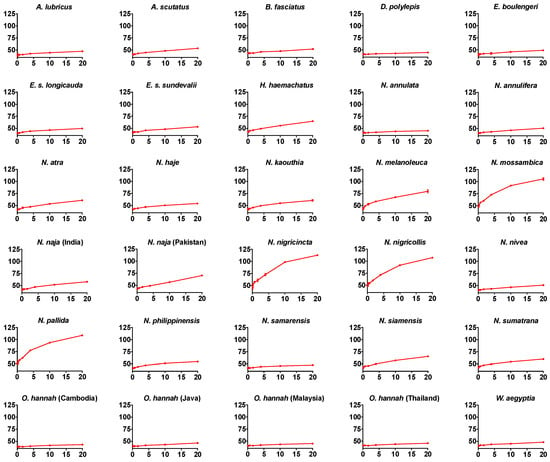