An On-Site Simultaneous Semi-Quantification of Aflatoxin B1, Zearalenone, and T-2 Toxin in Maize- and Cereal-Based Feed via Multicolor Immunochromatographic Assay
Next Article in Special Issue

Characterization of the Venom of C. d. cumanesis of Colombia: Proteomic Analysis and Antivenomic Study
Previous Article in Special Issue

Multiple Mycotoxins in Rice: Occurrence and Health Risk Assessment in Children and Adults of Punjab, Pakistan

Fusarium graminearum in Stored Wheat: Use of CO2 Production to Quantify Dry Matter Losses and Relate This to Relative Risks of Zearalenone Contamination under Interacting Environmental Conditions

Zearalenone (ZEN) contamination from Fusarium graminearum colonization is particularly important in food and feed wheat, especially during post-harvest storage with legislative limits for both food and feed grain. Indicators of the relative risk from exceeding these limits would be useful. We examined the effect of different water activities (aw; 0.95–0.90) and temperature (10–25 °C) in naturally contaminated and irradiated wheat grain, both inoculated with F. graminearum and stored for 15 days on (a) respiration rate; (b) dry matter losses (DML); (c) ZEN production and (d) relationship between DML and ZEN contamination relative to the EU legislative limits. Gas Chromatography was used to measure the temporal respiration rates and the total accumulated CO2 production. There was an increase in temporal CO2 production rates in wetter and warmer conditions in all treatments, with the highest respiration in the 25 °C × 0.95 aw treatments + F. graminearum inoculation. This was reflected in the total accumulated CO2 in the treatments. The maximum DMLs were in the 0.95 aw/20–25 °C treatments and at 10 °C/0.95 aw. The DMLs were modelled to produce contour maps of the environmental conditions resulting in maximum/minimum losses. Contamination with ZEN/ZEN-related compounds were quantified. Maximum production was at 25 °C/0.95–0.93 aw and 20 °C/0.95 aw. ZEN contamination levels plotted against DMLs for all the treatments showed that at ca. <1.0% DML, there was a low risk of ZEN contamination exceeding EU legislative limits, while at >1.0% DML, the risk was high. This type of data is important in building a database for the development of a post-harvest decision support system for relative risks of different mycotoxins. View Full-Text
Keywords: Fusarium graminearum; mycotoxins; water activity; temperature; respiration rates; risk; cereals Fusarium graminearum; mycotoxins; water activity; temperature; respiration rates; risk; cereals
►▼ Show Figures 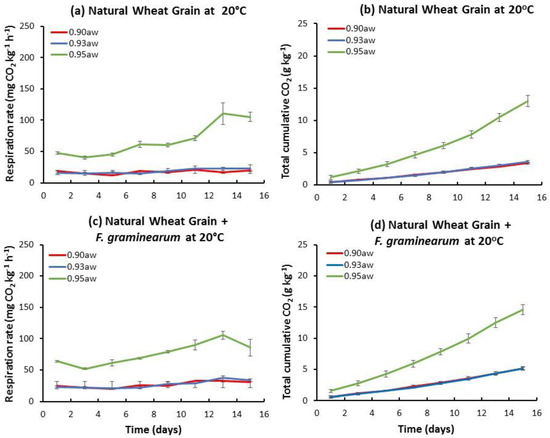