Comparison of Anorectic Potencies of Type A Trichothecenes T-2 Toxin, HT-2 Toxin, Diacetoxyscirpenol, and Neosolaniol
Next Article in Special Issue

Development of an Analytical Method for Simultaneous Determination of the Modified Forms of 4,15-Diacetoxyscirpenol and their Occurrence in Japanese Retail Food 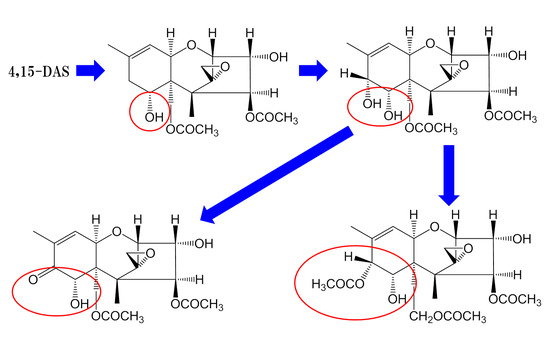 
Yoshinari, Tomoya, Nanami Takeda, Maiko Watanabe, and Yoshiko Sugita-Konishi. 2018. "Development of an Analytical Method for Simultaneous Determination of the Modified Forms of 4,15-Diacetoxyscirpenol and their Occurrence in Japanese Retail Food" Toxins 10, no. 5: 178. https://0-doi-org.brum.beds.ac.uk/10.3390/toxins10050178