Metabolites Identified during Varied Doses of Aspergillus Species in Zea mays Grains, and Their Correlation with Aflatoxin Levels
Next Article in Special Issue

The Cape Verde islands are part of the African Sahelian arid belt that possesses an erratic rain pattern prompting the need for water reservoirs, which are now critical for the country’s sustainability. Worldwide, freshwater cyanobacterial blooms are increasing in frequency due to global climate change and the eutrophication of water bodies, particularly in reservoirs. To date, there have been no risk assessments of cyanobacterial toxin production in these man-made structures. We evaluated this potential risk using 16S rRNA gene amplicon sequencing and full metagenome sequencing in freshwater reservoirs of Cape Verde. Our analysis revealed the presence of several potentially toxic cyanobacterial genera in all sampled reservoirs. Faveta potentially toxic and bloom-forming Microcystis sp., dominated our samples, while a Cryptomonas green algae and Gammaproteobacteria dominated Saquinho and Poilão reservoirs. We reconstructed and assembled the Microcystis genome, extracted from the metagenome of bulk DNA from Faveta water. Phylogenetic analysis of Microcystis cf. aeruginosa CV01’s genome revealed its close relationship with other Microcystis genomes, as well as clustering with other continental African strains, suggesting geographical coherency. In addition, it revealed several clusters of known toxin-producing genes. This survey reinforces the need to better understand the country’s microbial ecology as a whole of water reservoirs on the rise. View Full-Text
Keywords: toxins; Cyanobacteria; NGS; Microcystis; MAGs; metagenome; freshwater; microbial communities; Cape Verde; reservoirs toxins; Cyanobacteria; NGS; Microcystis; MAGs; metagenome; freshwater; microbial communities; Cape Verde; reservoirs
►▼ Show Figures 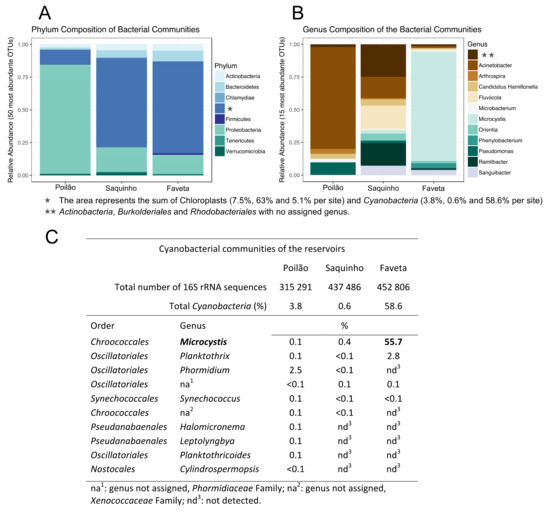