Current Status of Mycotoxin Contamination of Food Commodities in Zimbabwe

Agricultural products, especially cereal grains, serve as staple foods in sub-Saharan Africa. However, climatic conditions in this region can lead to contamination of these commodities by moulds, with subsequent production of mycotoxins posing health risks to both humans and animals. There is limited documentation on the occurrence of mycotoxins in sub-Saharan African countries, leading to the exposure of their populations to a wide variety of mycotoxins through consumption of contaminated foods. This review aims at highlighting the current status of mycotoxin contamination of food products in Zimbabwe and recommended strategies of reducing this problem. Zimbabwe is one of the African countries with very little information with regards to mycotoxin contamination of its food commodities, both on the market and at household levels. Even though evidence of multitoxin occurrence in some food commodities such as maize and other staple foods exist, available published research focuses only on Aspergillus and Fusarium mycotoxins, namely aflatoxins, deoxynivalenol (DON), trichothecenes, fumonisins, and zearalenone (ZEA). Occurrence of mycotoxins in the food chain has been mainly associated with poor agricultural practices. Analysis of mycotoxins has been done mainly using chromatographic and immunological methods. Zimbabwe has adopted European standards, but the legislation is quite flexible, with testing for mycotoxin contamination in food commodities being done voluntarily or upon request. Therefore, the country needs to tighten its legislation as well as adopt stricter standards that will improve the food safety and security of the masses. View Full-Text
Keywords: mycotoxins; legislation; Zimbabwe; food; feed; standards; analysis mycotoxins; legislation; Zimbabwe; food; feed; standards; analysis
►▼ Show Figures 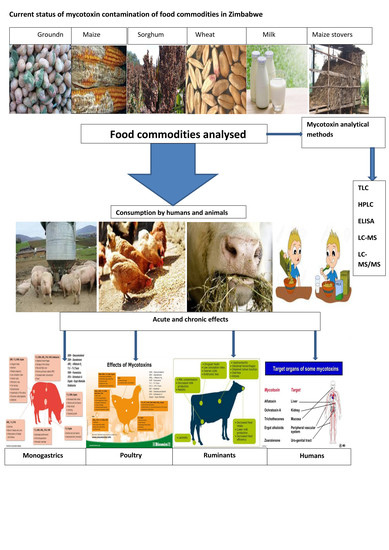