Submit to Toxins Review for Toxins 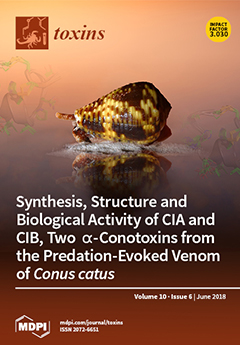 Cover Story (view full-size image): Cone snails are predatory marine gastropods that use venom to catch preys and defend against predators. In this issue, Giribaldi et al. synthesized and pharmacologically characterized two alpha-conotoxins from the piscivorous species Conus catus, namely CIA and CIB. CIA potently blocks the muscle type nicotinic acetylcholine receptor, whereas CIB inhibits neuronal subtypes. The 20 lowest energy NMR structures for CIB, superimposed over the backbone atoms, show a central α-helical region comprising residues 6-11. View Paper here.
Previous Issue
Volume 10, May
Next Issue
Volume 10, July
We use cookies on our website to ensure you get the best experience. Read more about our cookies here.
Accept
We have just recently launched a new version of our website. Help us to further improve by taking part in this short 5 minute survey here. here.
Never show this again