A New Conjugation Method Used for the Development of an Immunoassay for the Detection of Amanitin, a Deadly Mushroom Toxin
Previous Article in Journal

Aflatoxin B1 and M1: Biological Properties and Their Involvement in Cancer Development
Previous Article in Special Issue

Changes in Phenylpropanoid and Trichothecene Production by Fusarium culmorum and F. graminearum Sensu Stricto via Exposure to Flavonoids

Amatoxin poisoning induces delayed-onset acute liver failure, which are responsible for more than 90% of deaths in mushroom poisoning. It has been postulated from animal and human studies that biliary drainage interrupting enterohepatic amatoxin circulation may affect amatoxin poisoning. Dogs were randomly divided into four groups of six animals each. In 20 mg/kg and 60 mg/kg with biliary drainage groups, after accepting bile drainage operation, beagles were fed Amanita exitialis powder (20 or 60 mg/kg) in starch capsules. In control and bile drainage groups, the beagle dogs were fed with empty capsules. They were assessed for toxicity signs, biochemical and pathological changes, and peptide toxins in plasma, urine and bile. The data were directly compared with those from our published studies on Amanita exitialis-exposed beagles without biliary drainage. Amatoxins were rapidly absorbed and eliminated from plasma after Amanita exitialis ingestion. Amatoxins in 0–1-day urine accounted for more than 90% of the total urine excretion, and amatoxins in bile accounted for less than 20% of the total urine and bile excretion. The dogs with biliary drainage showed less severe toxicity signs and biochemical and pathological changes and much lower internal exposure than dogs without biliary drainage. Biliary drainage caused a more than 70% reduction in intestinal amatoxin absorption and could reduce amatoxin absorption from the gastrointestinal tract. View Full-Text
Keywords: Amanita exitialis; amatoxins; beagles; bile drainage; urine Amanita exitialis; amatoxins; beagles; bile drainage; urine
►▼ Show Figures 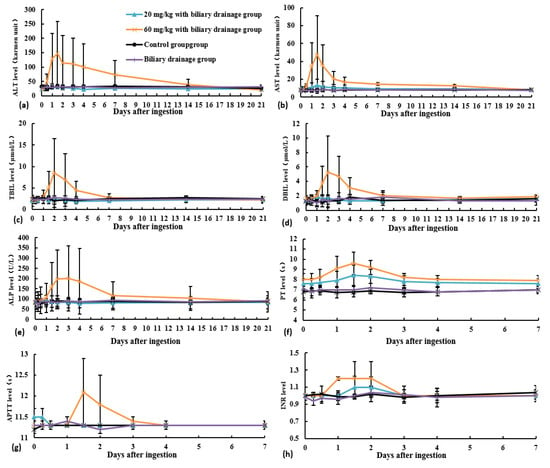