Mycobacterium massiliense is a rapid growing, multidrug-resistant, non-tuberculous mycobacteria that is responsible for a wide spectrum of skin and soft tissue infections, as well as other organs, such as the lungs. Antimicrobial peptides had been described as broad-spectrum antimicrobial, chemotactic, and immunomodulator molecules. In this study we evaluated an antimicrobial peptide derived from scorpion Tityus obscurus as an anti-mycobacterial agent in vitro and in vivo. Bioinformatics analyses demonstrated that the peptide ToAP2 have a conserved region similar to several membrane proteins, as well as mouse cathelicidin. ToAP2 inhibited the growth of four M. massiliense strains (GO01, GO06, GO08, and CRM0020) at a minimal bactericidal concentration (MBC) of 200 µM. MBC concentration used to treat infected macrophages was able to inhibit 50% of the bacterial growth of all strains. ToAP2 treatment of infected mice with bacilli reduced the bacterial load in the liver, lung, and spleen, similarly to clarithromycin levels (90%). ToAP2 alone recruited monocytes (F4/80low Gr1), neutrophils (F4/80− Gr1), and eosinophils (F4/80+ Gr1+). ToAP2, together with M. massiliense infection, was able to increase F4/80low and reduce the percentage of F4/80high macrophages when compared with infected and untreated mice. ToAP2 has in vitro anti-microbial activity that is improved in vivo due to chemotactic activity. View Full-Text
Keywords: antimicrobial peptide; mycobacteria inhibition; Mycobacterium; monocyte; neutrophil antimicrobial peptide; mycobacteria inhibition; Mycobacterium; monocyte; neutrophil
►▼ Show Figures 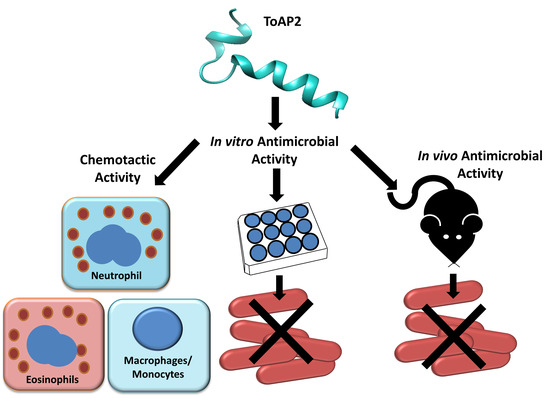