Toxin Production in Soybean (Glycine max L.) Plants with Charcoal Rot Disease and by Macrophomina phaseolina, the Fungus that Causes the Disease
Previous Article in Journal

Co-Occurrence and Combinatory Effects of Alternaria Mycotoxins and Other Xenobiotics of Food Origin: Current Scenario and Future Perspectives

Mycotoxins are low-molecular weight compounds produced by diverse genera of molds that may contaminate food and feed threatening the health of humans and animals. Recent findings underline the importance of studying the combined occurrence of multiple mycotoxins and the relevance of assessing the toxicity their simultaneous exposure may cause in living organisms. In this context, for the first time, this work has critically reviewed the most relevant data concerning the occurrence and toxicity of mycotoxins produced by Alternaria spp., which are among the most important emerging risks to be assessed in food safety, alone or in combination with other mycotoxins and bioactive food constituents. According to the literature covered, multiple Alternaria mycotoxins may often occur simultaneously in contaminated food, along with several other mycotoxins and food bioactives inherently present in the studied matrices. Although the toxicity of combinations naturally found in food has been rarely assessed experimentally, the data collected so far, clearly point out that chemical mixtures may differ in their toxicity compared to the effect of toxins tested individually. The data presented here may provide a solid foothold to better support the risk assessment of Alternaria mycotoxins highlighting the actual role of chemical mixtures on influencing their toxicity. View Full-Text
Keywords: Alternaria mycotoxins; combinatory effects; food safety; combined toxicity; co-occurrence; bioactive compounds Alternaria mycotoxins; combinatory effects; food safety; combined toxicity; co-occurrence; bioactive compounds
►▼ Show Figures 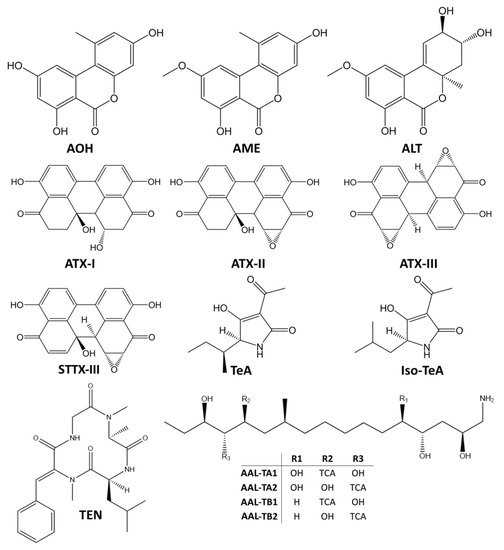