Our previous study showed that the srfABC operon, which was originally identified in Salmonella enterica as an SsrB-regulated operon clustered with the flagellar class 2 operon, exhibited significant cytotoxicity against insect midgut CF-203 cells and injectable insecticidal activity against Helicoverpa armigera larvae. The srfABC operon was widely distributed among bacteria, which raises the question of their biological roles in different species. In this study, we investigated the cytotoxic effect of SrfABC toxin on mammalian cell lines. When simultaneously expressed in the Escherichia coli cytoplasm, SrfABC exhibited cytotoxicity against all tested mammalian cancer cell lines (B16, 4T-1, Hep-3B, and HeLa) in a dose-dependent manner. Intracellular expression of SrfA–FLAG, SrfB–FLAG, or SrfC–FLAG also resulted in inhibition of proliferation and apoptosis on HeLa cells. When incubated with HeLa cells separately, SrfA, SrfB, and SrfC proteins alone could enter HeLa cells, then induce apoptosis and cytotoxicity. SrfC protein shifts its localization from cytoplasm to nucleus with the aid of SrfA and/or SrfB protein. Although SrfA, SrfB, and SrfC proteins alone exhibited a cytotoxic effect against HeLa cells, all three components were essential for the full cytotoxicity. Native PAGE and co-immunoprecipitation assay demonstrated that SrfA, SrfB, and SrfC proteins could interact with each other and form a heteromeric complex. View Full-Text
Keywords: SrfABC toxin; cytotoxicity; apoptosis; HeLa cells; co-immunoprecipitation SrfABC toxin; cytotoxicity; apoptosis; HeLa cells; co-immunoprecipitation
►▼ Show Figures 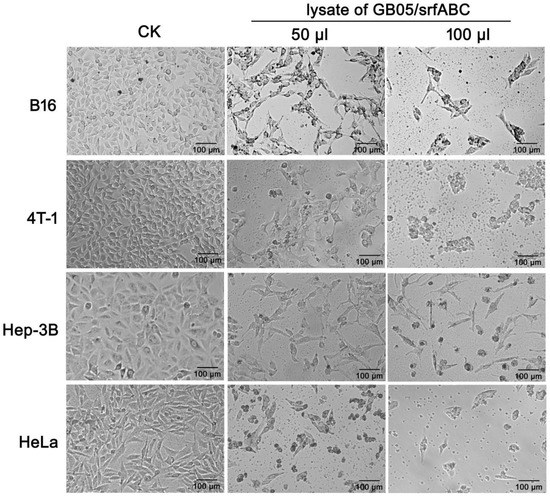