Use of Competitive Filamentous Fungi as an Alternative Approach for Mycotoxin Risk Reduction in Staple Cereals: State of Art and Future Perspectives
Next Article in Special Issue

Effects of Essential Oil Citral on the Growth, Mycotoxin Biosynthesis and Transcriptomic Profile of Alternaria alternata

Mycotoxins are secondary metabolites produced by certain filamentous fungi, causing human and animal health issues upon the ingestion of contaminated food and feed. Among the safest approaches to the control of mycotoxigenic fungi and mycotoxin detoxification is the application of microbial biocontrol agents. Burkholderia cepacia is known for producing metabolites active against a broad number of pathogenic fungi. In this study, the antifungal potential of a Qatari strain of Burkholderia cepacia (QBC03) was explored. QBC03 exhibited antifungal activity against a wide range of mycotoxigenic, as well as phytopathogenic, fungal genera and species. The QBC03 culture supernatant significantly inhibited the growth of Aspergillus carbonarius, Fusarium culmorum and Penicillium verrucosum in PDA medium, as well as A. carbonarius and P. verrucosum biomass in PDB medium. The QBC03 culture supernatant was found to dramatically reduce the synthesis of ochratoxin A (OTA) by A. carbonarius, in addition to inducing mycelia malformation. The antifungal activity of QBC03’s culture extract was retained following thermal treatment at 100 °C for 30 min. The findings of the present study advocate that QBC03 is a suitable biocontrol agent against toxigenic fungi, due to the inhibitory activity of its thermostable metabolites. View Full-Text
Keywords: Ochratoxin A; biological control; Qatari microflora; Burkholderia cepacia; thermostability Ochratoxin A; biological control; Qatari microflora; Burkholderia cepacia; thermostability
►▼ Show Figures 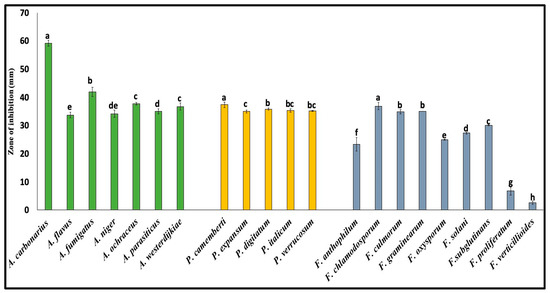 
Zeidan, Randa, Zahoor Ul-Hassan, Roda Al-Thani, Quirico Migheli, and Samir Jaoua. 2019. "In-Vitro Application of a Qatari Burkholderia cepacia strain (QBC03) in the Biocontrol of Mycotoxigenic Fungi and in the Reduction of Ochratoxin A biosynthesis by Aspergillus carbonarius" Toxins 11, no. 12: 700. https://0-doi-org.brum.beds.ac.uk/10.3390/toxins11120700