Microcystin-LR is a cyclic heptapeptide hepatotoxin produced by harmful cyanobacteria. A panel of microRNAs containing miR-451a were found to be significantly changed in normal human liver cells HL7702 after exposure to microcystin-LR (MC-LR) in our previous study. However, the functions of miR-451a in hepatotoxicity induced by MC-LR remained unclear. The study aimed to investigate the impacts of miR-451a in HL7702 cells following treatment with 5 or 10 μM MC-LR. The comet assay indicated that MC-LR can influence Olive tail moment (OTM) in HL7702 cells. Furthermore, increase of miR-451a significantly repressed DNA damage and the protein expression level of γ-H2AX induced by MC-LR. Moreover, over-expression of miR-451a inhibited the expression level of p-AKT1 protein in cells following treatment by MC-LR. These results showed that miR-451a may protect from MC-LR-induced DNA damage by down-regulating the expression of p-AKT1, which provides new clues for the diagnosis and therapy policies for liver damage induced by MC-LR.
Keywords: microcystin-LR; miR-451a; DNA damage; AKT1 microcystin-LR; miR-451a; DNA damage; AKT1

Microcystins (MCs) are a series of cyclic heptapeptide toxins generated by cyanobacteria that pose serious threats to the ecological system and public health. More than 100 species of MCs isomers have been ensured, out of which microcystin-LR (MC-LR) is the most popularly studied and most hazardous [1]. To ensure the safety of drinking water for residents, the World Health Organization (WHO) suggested the concentration of MC-LR should not exceed 1 μg/L in drinking water [2,3].
Humans can absorb MC-LR by drinking water, aquatic products as well as recreational water and affect many organs including the liver, brain, heart, intestine, kidneys and reproductive organs [3]. It is reported that MC-LR is an effective liver cancer promoter and was divided into as a Group 2B carcinogen by the International Agency for Research on Cancer (IARC) [4]. Earlier studies have showed that MC-LR depressed the activity of protein phosphatase 1 and 2A and then induced cytoskeleton disruption, autophagy, apoptosis and DNA damage [5,6,7,8,9]. Some previous studies showed that MC-LR can induce DNA double strand breakage and oxidant-induced DNA damage in vivo and in vitro [10,11]. However, the specific signal pathway of DNA damage caused by MC-LR still remained undefined.
MicroRNAs (miRNAs) are a family of non-coding RNAs with 18 to 24 nucleotides. It can negatively regulate gene expression or suppress translation and stability of mRNA via pair combined with the 3’ untranslated regions of its target genes [12,13]. Nowadays, miRNA play a significant roles in numerous cellular processes, including differentiation, proliferation, apoptosis and metabolism and development of cancers [14]. Our previous studies have shown that some miRNAs were important in MC-LR-induced hepatotoxicity and miR-451a was most significantly down-regulated in the 10 µM MC-LR treated cells [15]. However, the mechanism of miR-451a in MC-LR-induced hepatotoxicity remains unclear.
The roles of miR-451a in the DNA damage and its potential function in MC-LR induced toxicity in hepatic cells were investigated in this study, which provides new clues for the diagnosis and treatment policies for liver damage induced by MC-LR.

HL7702 cells were exposed to MC-LR (0, 5 and 10 μM) for 24 h and the DNA damage in HL7702 cells was determined with the comet assay and Western Blot. The data in Figure 1 represented the DNA damage in HL7702 cells of all experimental groups that was evaluated with Olive tail moment (OTM). DNA damage was significant increased after treatment with 5 and 10 μM MC-LR after 24 h compared with the 0 μM MC-LR group (Figure 1A). The mean value of OTM in 5 and 10 μM MC-LR treated cells was significantly increased in comparison to control group (Figure 1B).
γ-H2AX is a biomarker of DNA damage. Compared with the control group, the expression of γ-H2AX protein was significantly increased after a 24 h following 5 and 10 μM MC-LR and the level of γ-H2AX protein in the 10 μM MC-LR cells was statistically significant (Figure 1C).
Gaudin et al. found that DNA lesions were mainly induced in the liver, the kidney, the intestine and the colon after an intra-peritoneal injection. Furthermore, DNA damage rose after oral administration of MC-LR in mice blood cells [10], DNA damage were increased with dose and time dependent manner after exposing to MC-LR [11]. Thus, our results confirmed that MC-LR induces DNA damage and is similar to previous results.

AKT1 may be a target mRNAs for miR-451a by literature search and mirTarBase database prediction. To make sure the effect of miR-451a on AKT1 regulation, the miR-451a expression was up-regulated in cells after transfected with miR-451a-mimic (Figure 3A). The mRNA and protein levels of AKT1 were not altered by the up-regulation of miR-451a (Figure 3B,C). However, the p-AKT1 protein levels were down-regulated in HL7702 cells after treatment with MC-LR (Figure 3C).
The miRNA degrades the target mRNA or inhibits translation by combining with 3’UTR of the target mRNA. AKT1 may be the target gene of miR-451a according to the prediction using the database (http://mirtarbase.mbc.nctu.edu.tw/). It has been confirmed that over-expression of miR-451a in papillary thyroid carcinoma significantly reduced the AKT1 and p-AKT1 protein levels [17]. AKT is a numerous of serine and threonine protein kinases that plays an important role in cell proliferation, cell migration and DNA damage. In addition, AKT is participated in the process of cellular metabolism, Protein formation and immune cell function [19]. Studies have shown that AKT can inhibit DNA damage repair [20,21,22,23,24]. AKT activation mediates MDM2 phosphorylation, resulting in the degradation of p53. The increase in p53 degradation results into the loss of DNA repair capacity, which ultimately leads to accumulation of DNA damage [20]. Our study found that miR-451a expression was significantly increased after transfection with miR-451a mimic but AKT1 mRNA and protein levels were not significantly altered, while p-AKT1 protein levels were significantly reduced. This indicates that AKT1 may not be the direct target gene of miR-451a. miR-451a may be participated in MC-LR-induced DNA damage by indirectly regulating phosphorylation of AKT1.

This study showed there was a vital linkage among MC-LR, miR-451a and AKT1 in HL7702 cells. The toxicity caused by MC-LR probably was mediated by inhibition of the miR-451a, which induced DNA damage indirectly regulating phosphorylation of AKT1. DNA damage induced by MC-LR in hepatocytes can be protected through increasing the intracellular expression of miR-451a. These results suggested new biomarkers for the prevention, diagnosis and treatment liver diseases caused by MC-LR.

After exposure to MC-LR, 10 µL of cell suspension was mixed with 65 µL of 0.5% LMP agarose and added to fully frosted slides precoated with 1% NMP agarose. After solidification, the slides were lysed (2.5 M NaCl, 100 mM EDTA-Na2, 10 mM Tris, 1% sodium sarcosinate, 1% Triton X-100, 10% dimethyl sulfoxide, pH 10) 2 h at 4 °C. After the lysis, the lysed slides were immersed in the neutralizing solution (0.4 M Tris, pH 7.5) for 15 min. Then the slides were placed in the alkaline solution (300 mM NaOH, 1 mM EDTA-Na2, pH 13) for 20 min to allow DNA unwinding and subsequently electrophoresed for 30 min at 25 V, 300 mA. Finally, the slides were neutralized in 0.4 M Tris buffer (pH 7.5)-three times for 5 min, stained with propidium iodide (50 µg/mL) and photographed at 400× magnification using a fluorescence microscope. The comet pictures were analysed with CASP comet analysis software and the Olive tail moment of DNA was used to evaluate the level of DNA damage and a total of 50 randomly captured nuclei were examined from each slide in two independent experiments.

miR-mimics (control mimic and miR-451a-mimic) were purchased from Ribo Biological Company (Guangzhou, China). HL7702 cells were seeded in 6-well plates and allowed to reach 70% confluence after 24h. Lipofectamine™ 3000 (Invitrogen, Waltham, MA, USA) was used to transfect cells with DNA complexes according to manufacturer’s instruction and the cells were incubated at 37 °C for 24 h. Cells were grown with or without 5, 10 µM MC-LR for 24 h.

All calculations and statistical analyses were analysed by one-way analysis of variance (ANOVA), followed by the Dunnett’s t test with SPSS 13.0 (SPSS, Chicago, IL, USA). p < 0.05 is regarded as statistically significant. 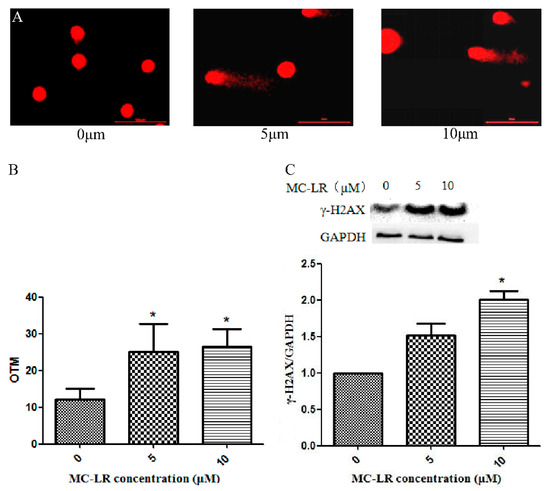 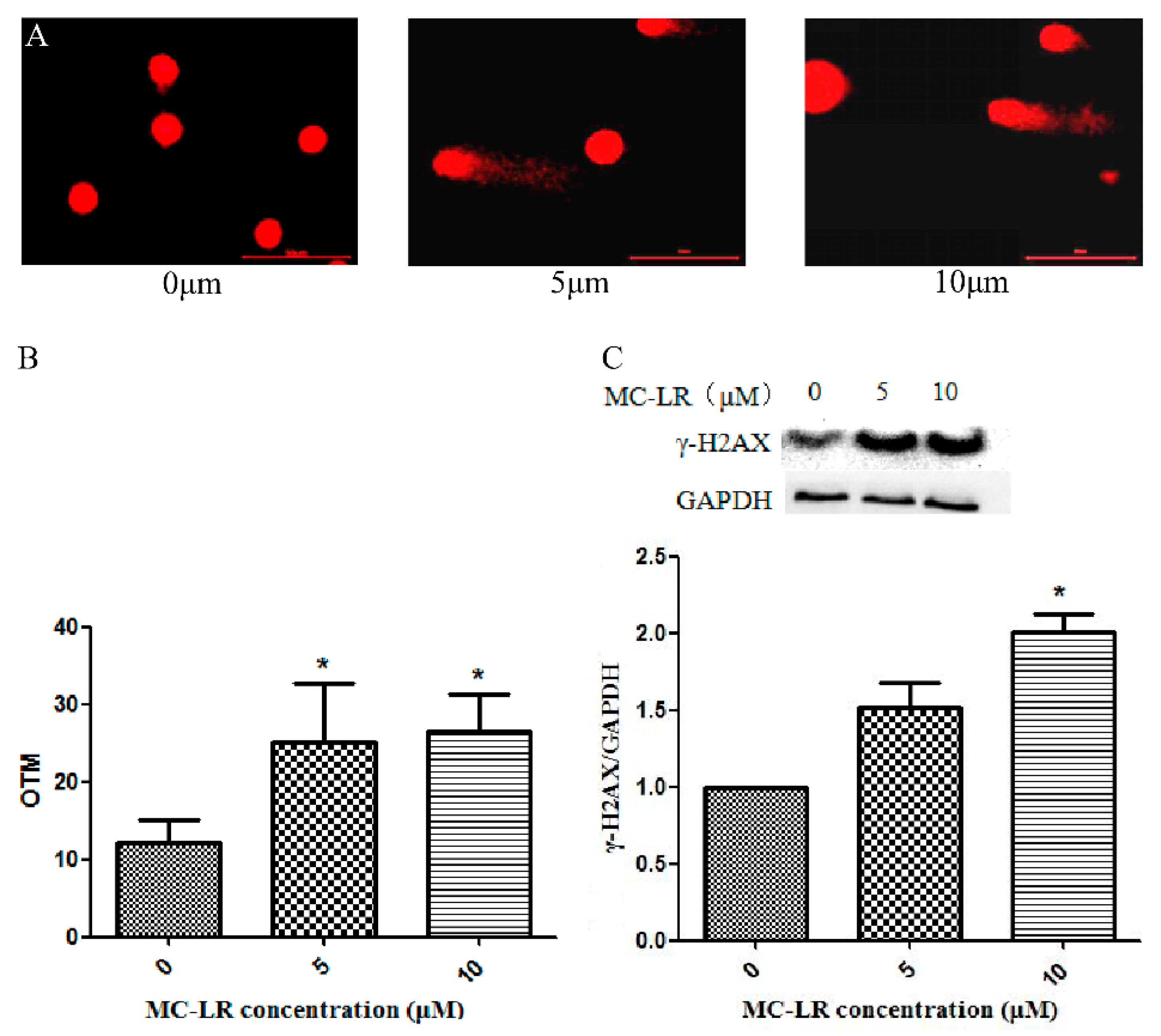 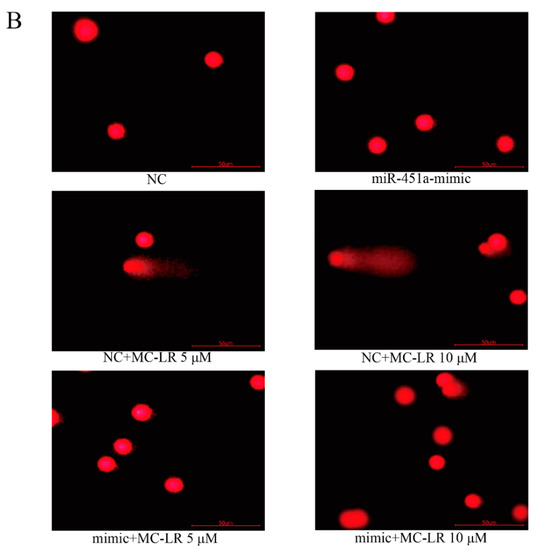 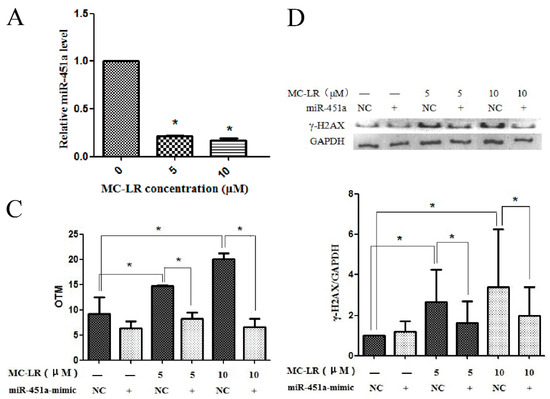 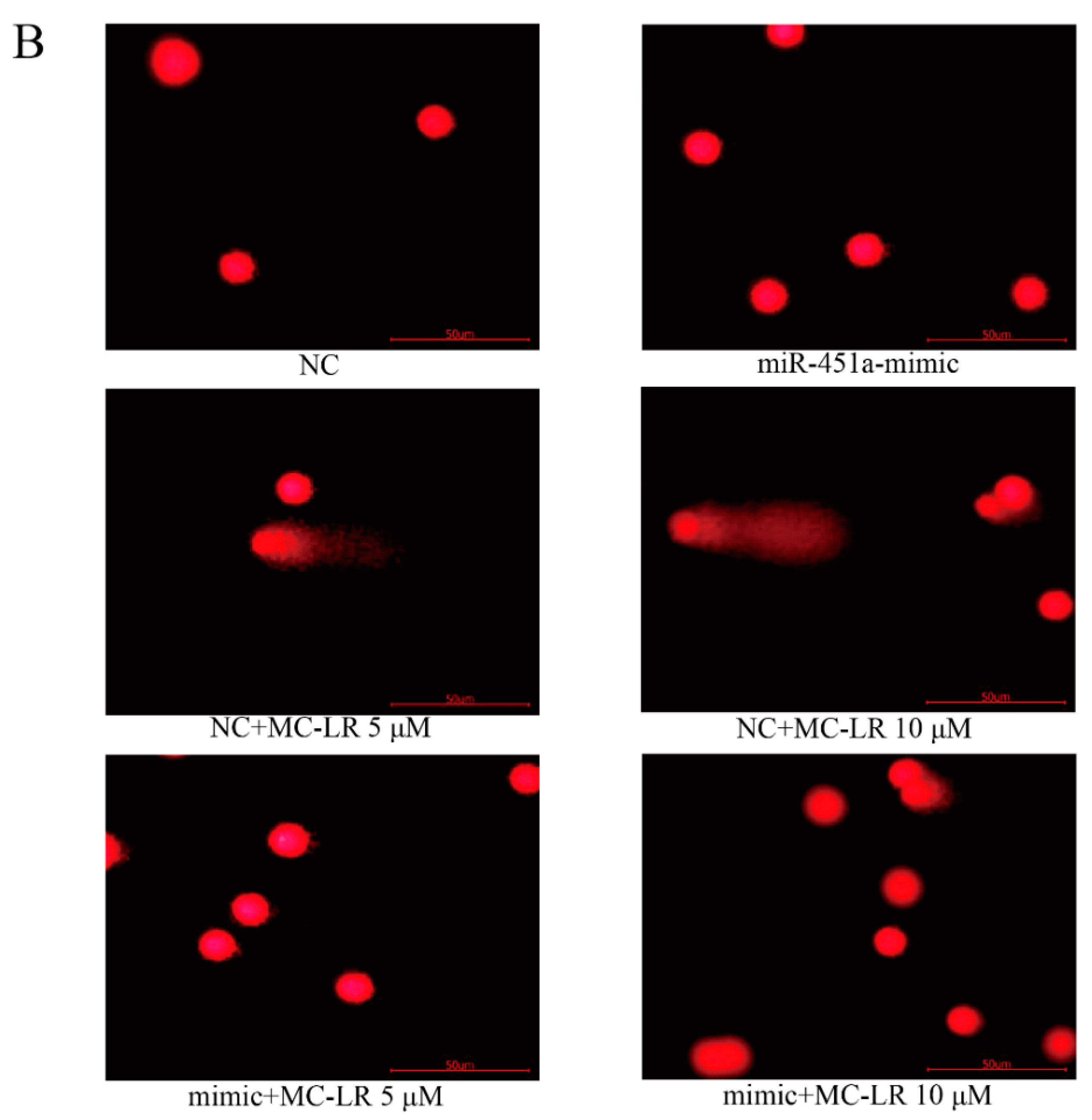 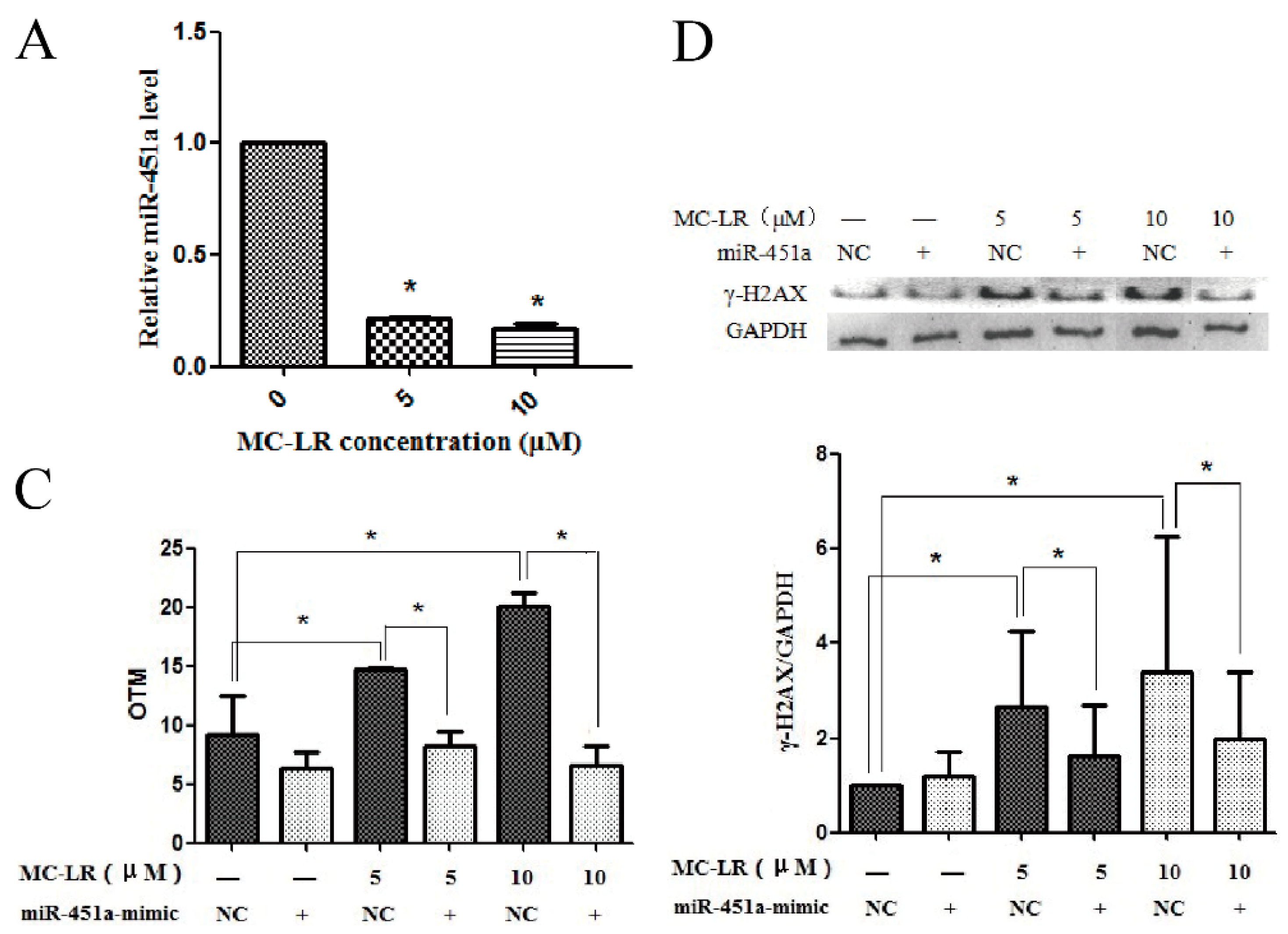 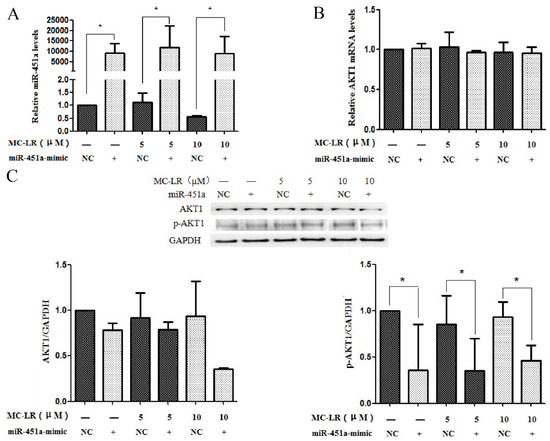 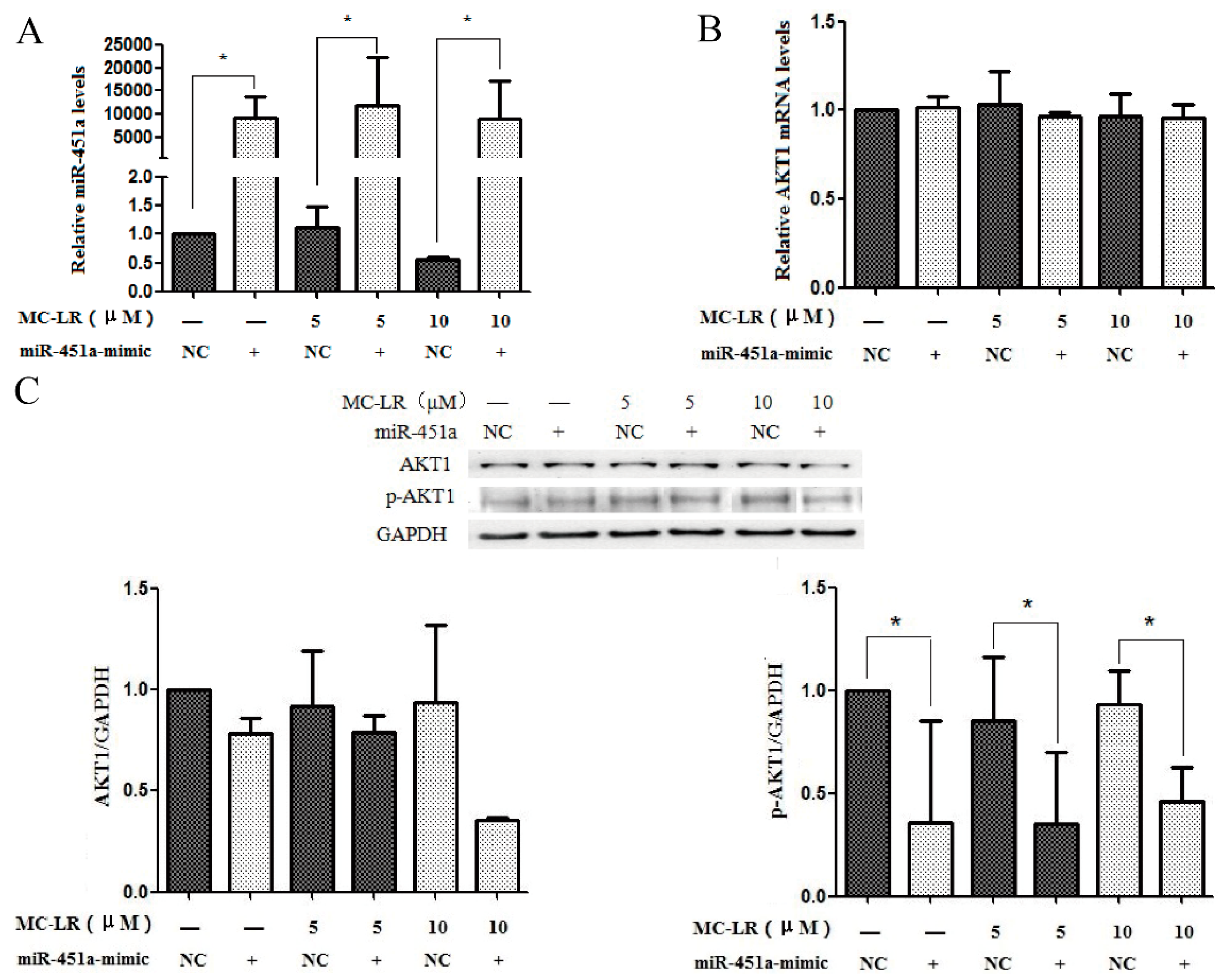 Table 1. qRT-PCR Primers in this study.
Table 1. qRT-PCR Primers in this study.
© 2019 by the authors. Licensee MDPI, Basel, Switzerland. This article is an open access article distributed under the terms and conditions of the Creative Commons Attribution (CC BY) license (http://creativecommons.org/licenses/by/4.0/).
We use cookies on our website to ensure you get the best experience. Read more about our cookies here.
Accept
We have just recently launched a new version of our website. Help us to further improve by taking part in this short 5 minute survey here. here.
Never show this again