Insecticidal proteins from Bacillus thuringiensis (Bt) are widely used to control insect pests, but their efficacy is reduced when pests evolve resistance. We report on a novel allele (r16) of the cadherin gene (PgCad1) in pink bollworm (Pectinophora gossypiella) associated with resistance to Bt toxin Cry1Ac, which is produced by transgenic cotton. The r16 allele isolated from a field population in China has 1545 base pairs of a degenerate transposon inserted in exon 20 of PgCad1, which generates a mis-spliced transcript containing a premature stop codon. A strain homozygous for r16 had 300-fold resistance to Cry1Ac, 2.6-fold cross-resistance to Cry2Ab, and completed its life cycle on transgenic Bt cotton producing Cry1Ac. Inheritance of Cry1Ac resistance was recessive and tightly linked with r16. Compared with transfected insect cells expressing wild-type PgCad1, cells expressing r16 were less susceptible to Cry1Ac. Recombinant cadherin protein was transported to the cell membrane in cells transfected with the wild-type PgCad1 allele, but not in cells transfected with r16. Cadherin occurred on brush border membrane vesicles (BBMVs) in the midgut of susceptible larvae, but not resistant larvae. These results imply that the r16 allele mediates Cry1Ac resistance in pink bollworm by interfering with the localization of cadherin. View Full-Text
Keywords: Bt cotton; resistance mechanism; Cry1Ac; Bacillus thuringiensis; Pectinophora gossypiella; genetically engineered crop; transposon Bt cotton; resistance mechanism; Cry1Ac; Bacillus thuringiensis; Pectinophora gossypiella; genetically engineered crop; transposon
►▼ Show Figures 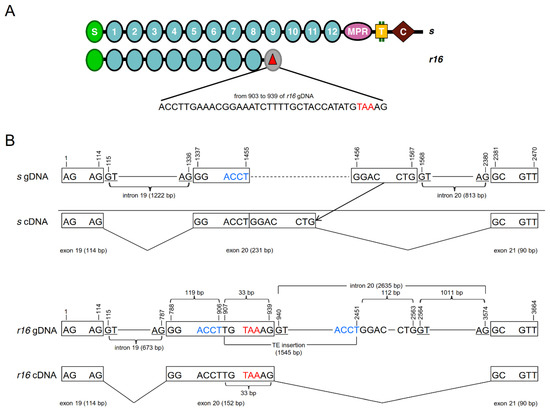