Mycotoxins occur worldwide in the major grains, and producers, traders and processors are all challenged to prevent serious health problems for consumers. The challenges originate with pre-harvest fungi infections in the grain fields, increased contamination during improper storage and, finally, the mycotoxin accumulation in commercial food and feed products. Little is known about the multi-mycotoxin occurrence in maize and wheat commercially produced in South Africa. This is the first comprehensive study that reports on the multi-mycotoxin occurrence in South African produced maize and wheat crops after harvest, over four production seasons, in all the production regions of the country. The study was made possible with the development of a fit-for-purpose, cost-effective LC-MS/MS multi-mycotoxin method, validated for 13 “regulated” mycotoxins. A low mycotoxin risk was found in South African produced wheat, with only deoxynivalenol (DON) in 12.5% of the 160 samples at levels well below the 2000 µg/kg South African (SA) regulatory level. It was concluded that aflatoxin B1 (AFB1) is seldom present in South African produced commercial maize. The concentrations, regional variation and seasonal trends of deoxynivalenol and fumonisins, the two most prevalent mycotoxins, and of zearalenone (ZON), are reported for white and yellow maize in all the production provinces, based on the analytical results of 1400 maize samples. A threefold to eightfold increase in deoxynivalenol mean concentrations in white maize was observed in the main production regions in the fourth season, with 8.9% samples above 2000 µg/kg. A strong correlation was found between higher deoxynivalenol concentrations and the presence of 15-acetyl-deoxynivalenol (15-ADON). The mean fumonisin concentrations were well below the 4000 µg/kg South African regulatory value. A possible shift in the incidence and severity of mycotoxigenic Fusarium spp. in the provinces must be investigated. The variations and trends highlight the importance of a continuous monitoring of multi-mycotoxins in South Africa along the grain value chain. View Full-Text
Keywords: South Africa; multi-mycotoxins; maize; wheat; post-harvest; survey; LC-MS/MS mycotoxin method South Africa; multi-mycotoxins; maize; wheat; post-harvest; survey; LC-MS/MS mycotoxin method
►▼ Show Figures 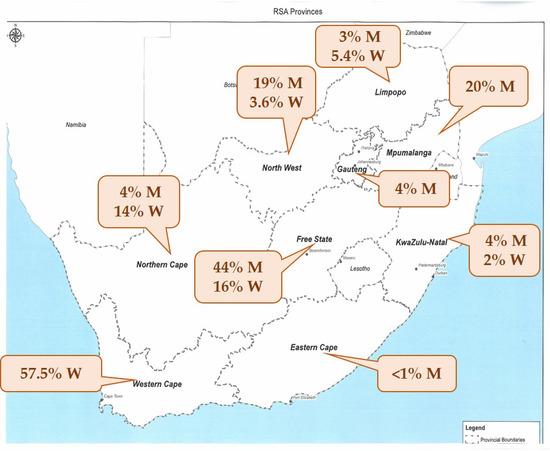