Toxicity Studies of Chanoclavine in Mice

The usage of insects as model organisms is becoming more and more common in toxicological, pharmacological, genetic and biomedical research. Insects, such as fruit flies (Drosophila melanogaster), locusts (Locusta migratoria), stick insects (Baculum extradentatum) or beetles (Tenebrio molitor) are used to assess the effect of different active compounds, as well as to analyse the background and course of certain diseases, including heart disorders. The goal of this study was to assess the influence of secondary metabolites extracted from Solanaceae and Brassicaceae plants: Potato (Solanum tuberosum), tomato (Solanum lycopersicum), black nightshade (Solanum nigrum) and horseradish (Armoracia rusticana), on T. molitor beetle heart contractility in comparison with pure alkaloids. During the in vivo bioassays, the plants glycoalkaloid extracts and pure substances were injected at the concentration 10−5 M into T. molitor pupa and evoked changes in heart activity. Pure glycoalkaloids caused mainly positive chronotropic effects, dependant on heart activity phase during a 24-h period of recording. Moreover, the substances affected the duration of the heart activity phases. Similarly, to the pure glycoalkaloids, the tested extracts also mainly accelerated the heart rhythm, however S. tuberosum and S. lycopersicum extracts slightly decreased the heart contractions frequency in the last 6 h of the recording. Cardioacceleratory activity of only S. lycopersicum extract was higher than single alkaloids whereas S. tubersoum and S. nigrum extracts were less active when compared to pure alkaloids. The most cardioactive substance was chaconine which strongly stimulated heart action during the whole recording after injection. A. rusticana extract which is composed mainly of glucosinolates did not significantly affect the heart contractions. Obtained results showed that glycoalkaloids were much more active than glucosinolates. However, the extracts depending on the plant species might be more or less active than pure substances. View Full-Text
Keywords: plant secondary metabolites; glycoalkaloids; insect heart; beetles; insect; Tenebrio molitor plant secondary metabolites; glycoalkaloids; insect heart; beetles; insect; Tenebrio molitor
►▼ Show Figures 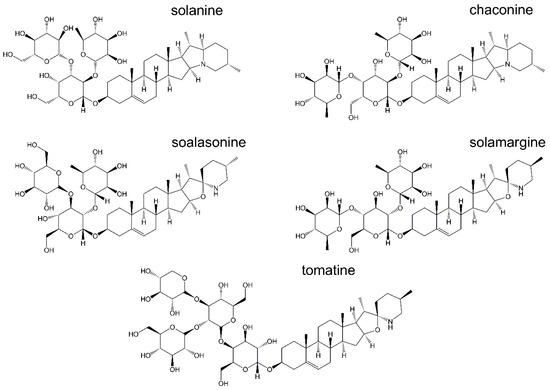