Effects of Destruxin A on Silkworm’s Immunophilins

Destruxin A (DA), a major secondary metabolite of Metarhizium anisopliae, has anti-immunity to insects. However, the detailed mechanism and its interactions with target proteins are elusive. Previously, three immunophilins, peptidyl–prolyl cis–trans isomerase (BmPPI), FK506 binding-protein 45 (BmFKBP45) and BmFKBP59 homologue, were isolated from the silkworm, Bombyx mori Bm12 cell line following treatment with DA, which suggested that these proteins were possible DA-binding proteins. To validate the interaction between DA and the three immunophilins, we performed bio-layer interferometry (BLI) assay, and the results showed that DA has interaction with BmPPI, whose affinity constant value is 1.98 × 10−3 M and which has no affinity with FKBP45 and FKBP59 homologue in vitro. Furthermore, we investigated the affinity between DA and human PPI protein (HsPPIA) and the affinity constant (KD) value is 2.22 × 10−3 M. Additionally, we compared the effects of silkworm and human PPI proteins produced by DA and immunosuppressants, cyclosporine A (CsA), and tacrolimus (FK506), by employing I2H (insect two-hybrid) in the SF-9 cell line. The results indicated that in silkworm, the effects created by DA and CsA were stronger than FK506. Furthermore, the effects created by DA in silkworm were stronger than those in humans. This study will offer new thinking to elucidate the molecular mechanism of DA in the immunity system of insects. View Full-Text
Keywords: Destruxin A; peptidyl-prolyl isomerase; FK506 binding protein; cyclosporine A; FK506; Bombyx mori Destruxin A; peptidyl-prolyl isomerase; FK506 binding protein; cyclosporine A; FK506; Bombyx mori
►▼ Show Figures 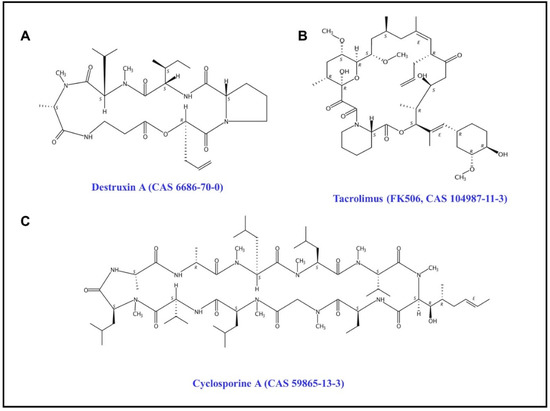