Zearalenone Contamination in Corn, Corn Products, and Swine Feed in China in 2016–2018 as Assessed by Magnetic Bead Immunoassay
Next Article in Special Issue

Marine Toxins and Nociception: Potential Therapeutic Use in the Treatment of Visceral Pain Associated with Gastrointestinal Disorders
Previous Article in Special Issue

Intracellular Transport and Cytotoxicity of the Protein Toxin Ricin

Ricin is a member of the ribosome-inactivating protein (RIP) family of toxins and is classified as a biothreat agent by the Centers for Disease Control and Prevention (CDC). Inhalation, the most potent route of toxicity, triggers an acute respiratory distress-like syndrome that coincides with near complete destruction of the lung epithelium. We previously demonstrated that the TNF-related apoptosis-inducing ligand (TRAIL; CD253) sensitizes human lung epithelial cells to ricin-induced death. Here, we report that ricin/TRAIL-mediated cell death occurs via apoptosis and involves caspases -3, -7, -8, and -9, but not caspase-6. In addition, we show that two other TNF family members, TNF-α and Fas ligand (FasL), also sensitize human lung epithelial cells to ricin-induced death. While ricin/TNF-α- and ricin/FasL-mediated killing of A549 cells was inhibited by the pan-caspase inhibitor, zVAD-fmk, evidence suggests that these pathways were not caspase-dependent apoptosis. We also ruled out necroptosis and pyroptosis. Rather, the combination of ricin plus TNF-α or FasL induced cathepsin-dependent cell death, as evidenced by the use of several pharmacologic inhibitors. We postulate that the effects of zVAD-fmk were due to the molecule’s known off-target effects on cathepsin activity. This work demonstrates that ricin-induced lung epithelial cell killing occurs by distinct cell death pathways dependent on the presence of different sensitizing cytokines, TRAIL, TNF-α, or FasL. View Full-Text
Keywords: ricin; toxins; cytokines; toxin-mediated diseases; apoptosis; cathepsin; tumor necrosis factor; fas; caspases ricin; toxins; cytokines; toxin-mediated diseases; apoptosis; cathepsin; tumor necrosis factor; fas; caspases
►▼ Show Figures 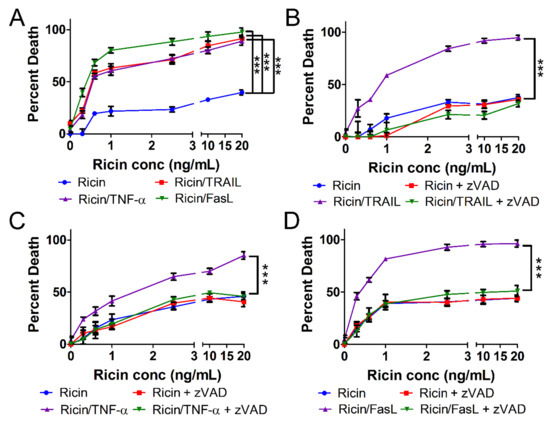