Clostridium is a broad genus of anaerobic, spore-forming, rod-shaped, Gram-positive bacteria that can be found in different environments all around the world. The genus includes human and animal pathogens that produce potent exotoxins that cause rapid and potentially fatal diseases responsible for countless human casualties and billion-dollar annual loss to the agricultural sector. Diseases include botulism, tetanus, enterotoxemia, gas gangrene, necrotic enteritis, pseudomembranous colitis, blackleg, and black disease, which are caused by pathogenic Clostridium. Due to their ability to sporulate, they cannot be eradicated from the environment. As such, immunization with toxoid or bacterin-toxoid vaccines is the only protective method against infection. Toxins recovered from Clostridium cultures are inactivated to form toxoids, which are then formulated into multivalent vaccines. This review discusses the toxins, diseases, and toxoid production processes of the most common pathogenic Clostridium species, including Clostridium botulinum, Clostridium tetani, Clostridium perfringens, Clostridium chauvoei, Clostridium septicum, Clostridium novyi and Clostridium hemolyticum. View Full-Text
Keywords: Clostridium; clostridia diseases; vaccine production; toxoids; fermentation Clostridium; clostridia diseases; vaccine production; toxoids; fermentation
►▼ Show Figures 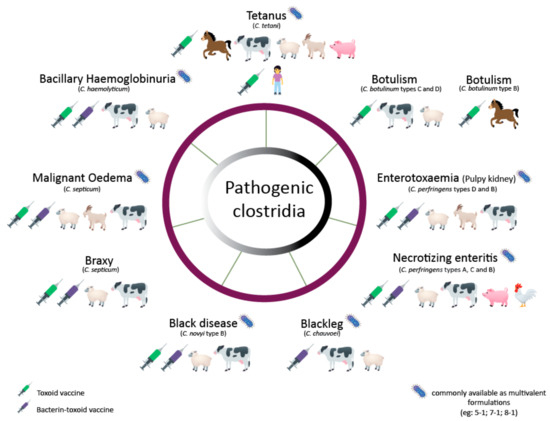