The Diversity of Cyanobacterial Toxins on Structural Characterization, Distribution and Identification: A Systematic Review
Previous Article in Special Issue

The selective and sensitive analysis of mycotoxins in highly complex feed matrices is a great challenge. In this study, the suitability of OrbitrapTM-based high-resolution mass spectrometry (HRMS) for routine mycotoxin analysis in complex feeds was demonstrated by the successful validation of a full MS/data-dependent MS/MS acquisition method for the quantitative determination of eight Fusarium mycotoxins in forage maize and maize silage according to the Commission Decision 2002/657/EC. The required resolving power for accurate mass assignments (<5 ppm) was determined as 35,000 full width at half maximum (FWHM) and 70,000 FWHM for forage maize and maize silage, respectively. The recovery (RA), intra-day precision (RSDr), and inter-day precision (RSDR) of measurements were in the range of 94 to 108%, 2 to 16%, and 2 to 12%, whereas the decision limit (CCα) and the detection capability (CCβ) varied from 11 to 88 µg/kg and 20 to 141 µg/kg, respectively. A set of naturally contaminated forage maize and maize silage samples collected in northern Germany in 2017 was analyzed to confirm the applicability of the HRMS method to real samples. At least four Fusarium mycotoxins were quantified in each sample, highlighting the frequent co-occurrence of mycotoxins in feed. View Full-Text
Keywords: Fusarium; validation; forage maize; maize silage; LC-HRMS; OrbitrapTM Fusarium; validation; forage maize; maize silage; LC-HRMS; OrbitrapTM
►▼ Show Figures 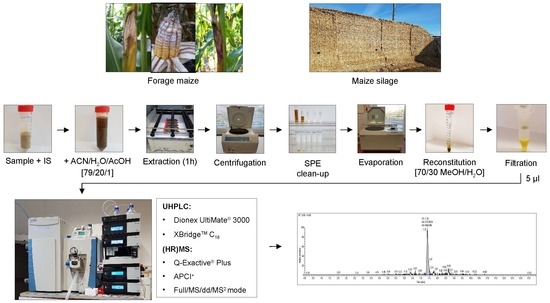