“Ciguatera” fish poisoning (CFP) is one of the well-known food poisoning caused by the ingestion of fish that have accumulated trace amounts of ciguatoxins (CTXs). CFP affects more than 50,000 individuals annually. The difficulty in preventing CFP comes from the lack of reliable methods for analysis of CTXs in contaminated fish, together with the normal appearance, taste, and smell of CTX-contaminated fish. Thus, a sensitive, accurate, routine, and portable analytical method to detect CTXs is urgently required. Monoclonal antibodies (mAbs) specific against either wing of major CTX congeners (CTX1B, 54-deoxyCTX1B, CTX3C, and 51-hydroxyCTX3C) were generated by immunizing mice with rationally designed synthetic haptens-KLH conjugates instead of the CTXs. Haptenic groups with a surface area greater than 400 Å2 are required to produce mAbs that can strongly bind to CTXs. Furthermore, a highly sensitive fluorescence-based sandwich enzyme-linked immunosorbent assay (ELISA) was developed. This protocol can detect and quantify four major CTX congeners (CTX1B, 54-deoxyCTX1B, CTX3C, and 51-hydroxyCTX3C) with a limit of detection (LOD) of less than 1 pg/mL. The LOD determined for this sandwich ELISA is sufficient to detect CTX1B-contaminated fish at the FDA guidance level of 0.01 ppb. View Full-Text
Keywords: ciguatera; ciguatoxin; monoclonal antibody; sandwich ELISA ciguatera; ciguatoxin; monoclonal antibody; sandwich ELISA
►▼ Show Figures 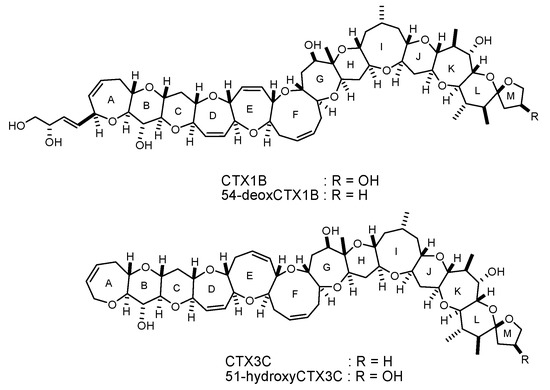