Identification of a Novel Saxitoxin Analogue, 12β-Deoxygonyautoxin 3, in the Cyanobacterium, Anabaena circinalis (TA04)

Saxitoxin (STX) and its analogues, the potent voltage-gated sodium channel blockers, are biosynthesized by freshwater cyanobacteria and marine dinoflagellates. We previously identified several biosynthetic intermediates in the extract of the cyanobacterium, Anabaena circinalis (TA04), that are primarily produced during the early and middle stages in the biosynthetic pathway to produce STX. These findings allowed us to propose a putative biosynthetic pathway responsible for STX production based on the structures of these intermediates. In the present study, we identified 12β-deoxygonyautoxin 3 (12β-deoxyGTX3), a novel STX analogue produced by A. circinalis (TA04), by comparing the retention time and MS/MS fragmentation pattern with those of synthetic standards using LC–MS. The presence of this compound in A. circinalis (TA04) is consistent with stereoselective enzymatic oxidations at C11 and C12, and 11-O-sulfation, during the late stage of STX biosynthesis, as proposed in previous studies. View Full-Text
Keywords: saxitoxin; gonyautoxin; biosynthesis; Anabaena circinalis; paralytic shellfish toxins saxitoxin; gonyautoxin; biosynthesis; Anabaena circinalis; paralytic shellfish toxins
►▼ Show Figures 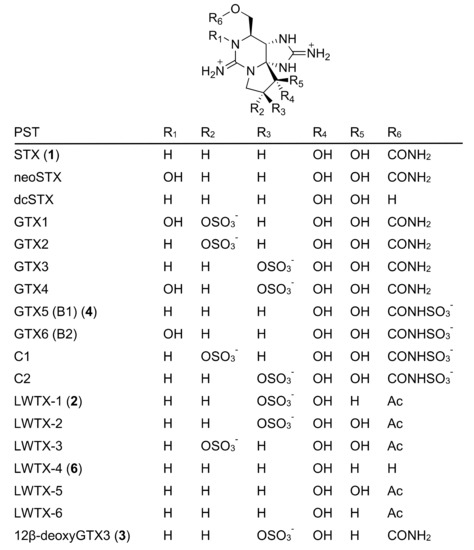