Tetrodotoxin and Its Analogues in Cephalothrix cf. simula (Nemertea: Palaeonemertea) from the Sea of Japan (Peter the Great Gulf): Intrabody Distribution and Secretions
Next Article in Special Issue

Fescue toxicosis impacts beef cattle production via reductions in weight gain and muscle development. Isoflavone supplementation has displayed potential for mitigating these effects. The objective of the current study was to evaluate isoflavone supplementation with fescue seed consumption on rumen and serum metabolomes. Angus steers (n = 36) were allocated randomly in a 2 × 2 factorial arrangement of treatments including endophyte-infected (E+) or endophyte-free (E−) tall fescue seed, with (P+) or without (P−) isoflavones. Steers were provided a basal diet with fescue seed for 21 days, while isoflavones were orally administered daily. Following the trial, blood and rumen fluid were collected for metabolite analysis. Metabolites were extracted and then analyzed by UPLC-MS. The MAVEN program was implemented to identify metabolites for MetaboAnalyst 4.0 and SAS 9.4 statistical analysis. Seven differentially abundant metabolites were identified in serum by isoflavone treatment, and eleven metabolites in the rumen due to seed type (p < 0.05). Pathways affected by treatments were related to amino acid and nucleic acid metabolism in both rumen fluid and serum (p < 0.05). Therefore, metabolism was altered by fescue seed in the rumen; however, isoflavones altered metabolism systemically to potentially mitigate detrimental effects of seed and improve animal performance.
Keywords: beef cattle; endophyte; ergot alkaloid; fescue toxicosis; isoflavone; metabolites beef cattle; endophyte; ergot alkaloid; fescue toxicosis; isoflavone; metabolites

Tall fescue is the major forage used to feed cattle in pasture-based systems of the southeast and covers approximately 14 million hectares across the United States [1]. The advantage of tall fescue is hardiness of the plants attributed to the presence of a fungal endophyte (Epichloë coenophialum, formerly known as Neotyphodium coenophialum and Acremonium coenophialum) living in a mutualistic relationship with the plant [2]. However, the endophyte produces ergot alkaloids that are toxic to animals that consume them for an extended period of time [3]. Ergot alkaloids are able to bind biogenic amine receptors on blood vessels, resulting in vasoconstriction throughout the body [4,5,6]. This results in a condition known as fescue toxicosis, which is commonly observed by the animal’s inability to thermoregulate [7], poor reproductive performance [1], and reduced average daily gain [8], significantly reducing overall animal performance. Therefore, researchers are tasked with identifying management methods and therapeutics to alleviate these consequences to cattle producers.
Pasture management methods have been evaluated for reducing the impact of fescue toxicosis in cattle. Inter-seeding of legumes, such as red clover, to mitigate the effects of fescue toxicosis has proved beneficial in cattle grazing endophyte-infected tall fescue [9]. Recent research has found phytoestrogenic compounds, known as isoflavones, present in red clover may be responsible for reducing the effects of fescue toxicosis. Isoflavones act as an agonist on the β-adrenergic receptors present on blood vessels to promote vasodilation [10], reversing the effects of ergot alkaloid induced vasoconstriction. Additionally, isoflavones act as a natural antibiotic selective against hyper-ammonia-producing bacteria (HAB) and some cellulolytic and amylolytic bacteria [11,12]. The reduction of ammonia levels as a result of less HAB in the rumen allows more amino acids to be absorbed and used by the ruminant, while altered celluloytic and amylolytic bacteria can influence the production of volatile fatty acids for energy. Therefore, the increase in blood flow and altered rumen fermentation may improve nutrient delivery and utilization for host metabolic processes contributing to animal growth.
The objective of the present study is to evaluate the effect of isoflavone supplementation with tall fescue seed consumption on beef steer’s rumen and serum metabolomes. Ruminal and circulating metabolites may provide insights into altered bacterial and host metabolic functions that improve steer performance on endophyte infected tall fescue with the administration of isoflavones.

An orthogonal partial least squares discriminant analysis (O-PLS-DA) was used to depict the relationship between the global rumen and serum metabolomes, which illustrated distinct separation between the two metabolomes (Figure 1). A heatmap was also used to visualize the top 25 rumen fluid and serum metabolites by individual steer (Figure 2). The heatmap supports that there is very little similarity between the overall ruminal and circulating metabolites.

In conclusion, the rumen metabolome was largely impacted by seed type, while the serum metabolome was influenced by isoflavone supplementation. In the rumen, the impact of the seed type involved carbohydrate and nucleic acids metabolism products of the fescue seed diet inclusion. In the serum, differences in global metabolomes and individual metabolites involved in urea cycling and amino acid metabolic pathways were identified in animals receiving isoflavones and those that did not. Although the low dose of isoflavones administered to cattle indicated effects on the serum and rumen metabolome, further research is needed to determine the effects at other doses. Future applications may lead to the dietary inclusion of isoflavones to reduce the harmful effects of tall fescue toxicosis.

All experimental procedures involving animals were approved by the University of Tennessee Institutional Animal Care and Use Committee. The ethic approval code (IACUC) was 2540-0617 and was approved on 20 June 2017.

Experimental design, animal treatments, and sample collection methods have been previously described in Melchior et al. [12]. Briefly, this study used 36 purebred Angus steers of approximately eight months of age weighing 250 ± 20 kg from Ames Plantation in Grand Junction, TN. Steers were transported to the Plateau Research and Education Center (PREC) in Crossville, TN for the trial, as previously described [12]. Steers were allowed a 10 d acclimation period to the diet formulated to provide 11.57% crude protein and 76.93% total digestible nutrients (DM basis). The GrowSafe System© (GrowSafe Systems Ltd., Calgary, AB, Canada) was used to monitor feed intake. Prior to the beginning of the trial, steers were genotyped for the DRD2 receptor gene, which can influence cattle’s response to fescue toxicity [12]. Using this information, the study was blocked on DRD2 genotype, implementing a randomized complete block design. A 2 × 2 factorial arrangement of treatments was utilized with two types of tall fescue including endophyte-infected (E+) and endophyte-free fescue (E−), and treatment with Promensil© (P+) or without (P−) to provide red clover isoflavones. This combination of treatments resulted in four treatment groups: (1) endophyte-infected seed without Promensil (E+P−), (2) endophyte-infected with Promensil (E+P+), (3) endophyte-free without Promensil (E−P−), and (4) endophyte-free with Promensil (E−P+). Within each genotype block, steers were randomly assigned to treatments with nine steers per treatment group. The feed trial occurred over 21 days. In order to provide a consistent amount of ergot alkaloids, endophyte-infected tall fescue seed heads were incorporated into feed to provide a minimum of 0.011 mg ergovaline plus ergovalinine × kg of body weight−1 (BW) per day [3]. Seed heads were ground through a 5 mm screen using a Wiley Mill (Thomas Scientific, Swedesboro, NJ, USA) and included in feed. A total of 943 mg of isoflavones was provided daily before morning feeding based on previously established dosages [10] using a 28.4 g bolus (Torpac, Inc., Fairfield, NJ, USA) to provide 24.7 g of Promensil. Melchior et al. [12] previously reported the analysis and information of the components present in Promensil, and steers’ response to endophyte-infected seed and altered performance parameters. On the final day of the trial (day 21), approximately 9 mL of blood was collected from the coccygeal vein using a serum separator tube (Corvac, Sherwood Medical., St. Louis, MO, USA), and approximately 100 mL of rumen content was collected via oro-gastric lavage. Blood samples were centrifuged at 2000× g and 4 °C for 20 min, and serum was transferred to 2 mL microvials and stored at −80 °C until metabolite extractions. Rumen samples were centrifuged at 6000× g at 4 °C for 20 min. The supernatant was aspirated and filtered through a 0.22 µm syringe filter, transferred to 2 mL microvials, and stored at −80 °C until metabolite extraction.

Metabolites were extracted and analyzed as previously described [17] at the UTK Biological and Small Molecule Mass Spectrometry Core (BSMMSC). Briefly, 50 µL of filtered rumen fluid and 50 µL of serum from each steer were extracted using 0.1% formic acid in acetonitrile/water/methanol (2:2:1) using a previously described method [39]. Mobile phases consisted of A: 97:3 water/methanol with 11 mM tributylamine and 15 mM acetic acid and B: methanol, and a gradient consisting of the following: 0.0 min, 0% B; 2.5 min 0% B; 5.0 min, 20% B; 7.5 min, 20% B; 13 min, 55% B; 15.5 min, 95% B; 18.5 min, 95% B; 19 min, 0% B; and 25 min, 0% B; Synergy Hydro-RP column (100 × 2 mm, 2.5 μm particle size) was used to separate metabolites. The flow rate was set to a constant 200 μL/min and the column temperature was kept at 25 °C. A Dionex UltiMate 3000 UPLC system (Thermo Fisher Scientific, Waltham, MA) with an autosampler tray maintained at 4 °C was used to introduce a 10 µL sample to an Exactive Plus Orbitrap MS (Thermo Fisher Scientific, Waltham, MA, USA) using negative electrospray ionization (ESI) with a capillary temperature of 300 °C; spray voltage of 3 kV; and nitrogen sheath and sweep gas at 25 and 3 units, respectively. Data acquisition was done in negative ion mode with a full-scan covering the range of 72–1000 m/z at 140,000 resolution with automatic gain control of 3 × 106 ions [40]. Metabolites are annotated using exact mass of the [M−H]− (±5 pmm) ion and known retention times (±0.3 min) generated from an in-house curated database. The database was created from the analysis of authentic standards and consisted of 300 compounds across various metabolic pathways, focusing on water soluble metabolites in pathways conserved among a diverse array of organisms.

Data were analyzed similarly to those of Clemmons et al. [17]. The Xcalibur MS software (Thermo Electron Corp., Waltham, MA) was used to produce raw files, which were then converted to mzML format using ProteoWizard [41]. The software package Metabolomic Analysis and Visualization Engine for LC–MS Data (MAVEN) [42] was used to identify peaks using converted mzML files. MAVEN identifies metabolites based on non-linear retention time correction and calculates peak areas across samples, using a preliminary mass error of ±20 ppm and a retention time window of 5 min. The UTK BSMMSC used a library of 263 retention time-accurate m/z pairs taken from MS1 spectra for final metabolite annotations. These are based on expansions of previous work [40] and have been replicated at the UTK BSMMSC. The eluted peak of the annotated metabolite had to be found within 2 min of the expected retention time, and the metabolite mass had to be within ±5 ppm of the expected value to be identified as a known compound. The compound area of each peak was calculated using the Quan Browser function of the Xcalibur MS Software (Thermo Electron Corp., Waltham, MA, USA).

This research was funded by the University of Tennessee CVM, Center for Excellence in Livestock and Human Diseases. 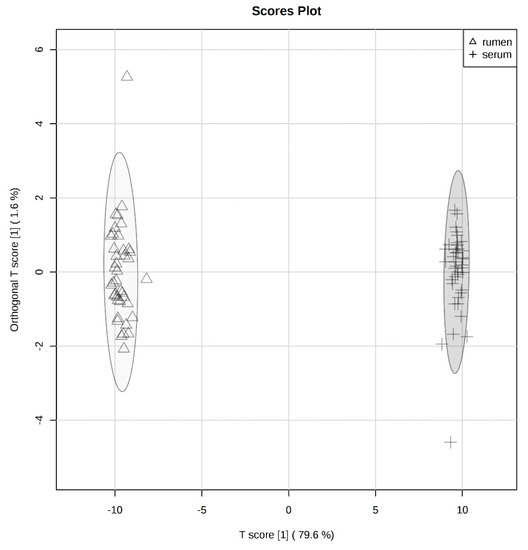 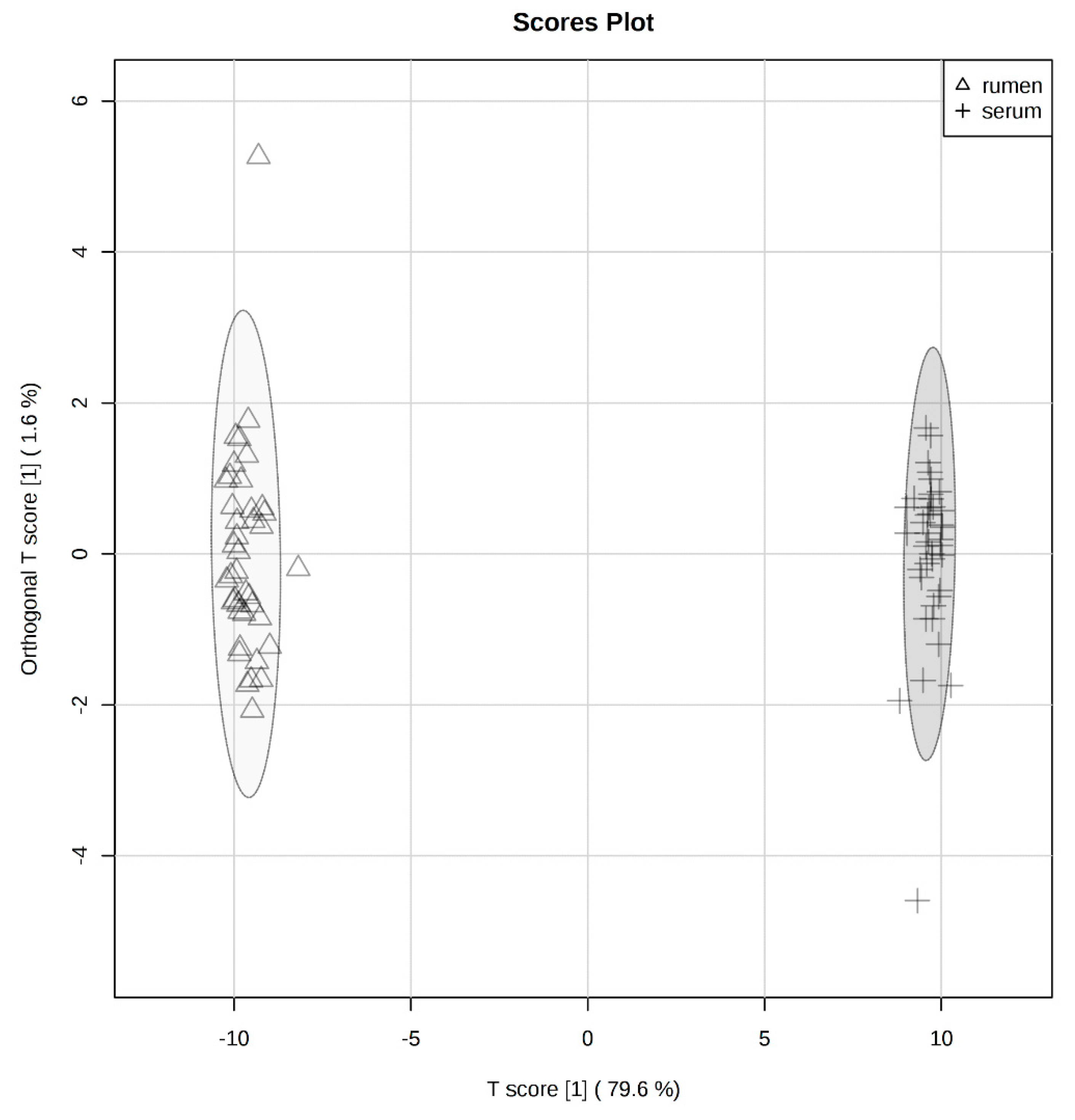 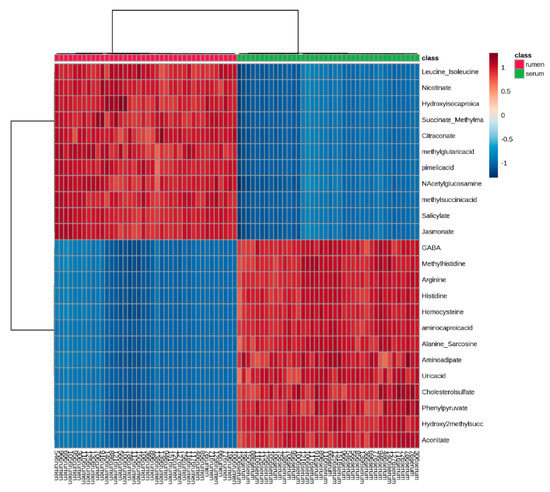 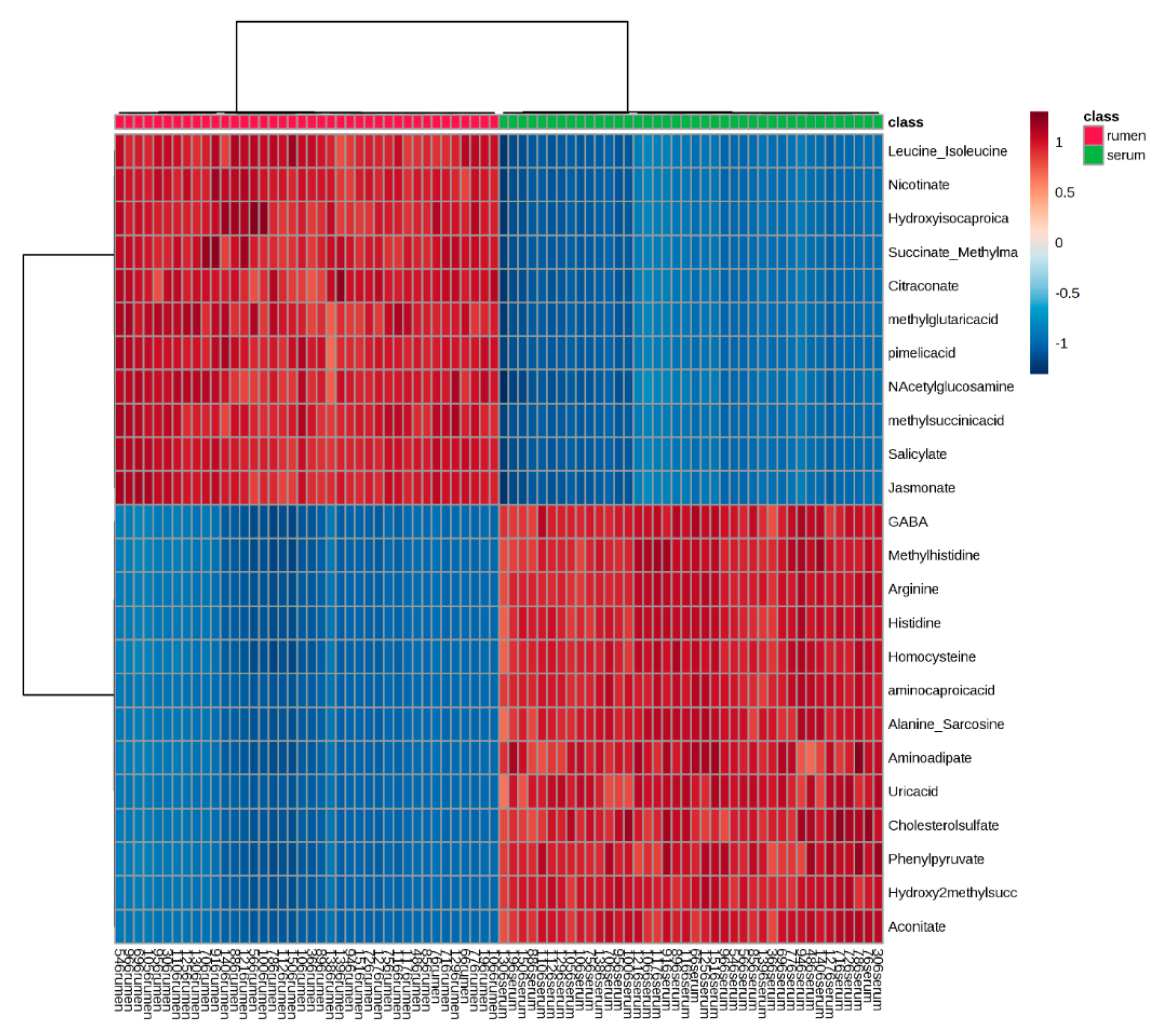 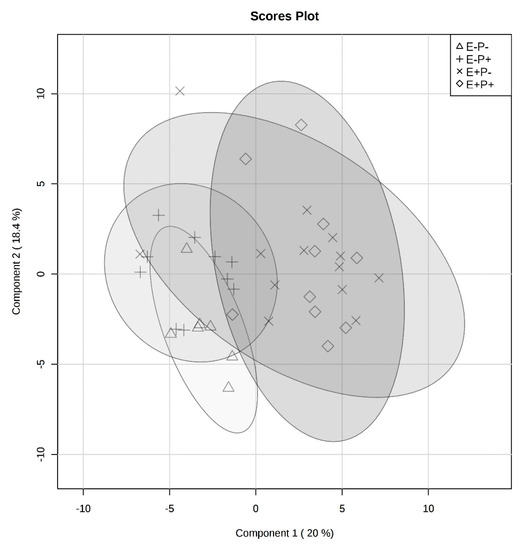 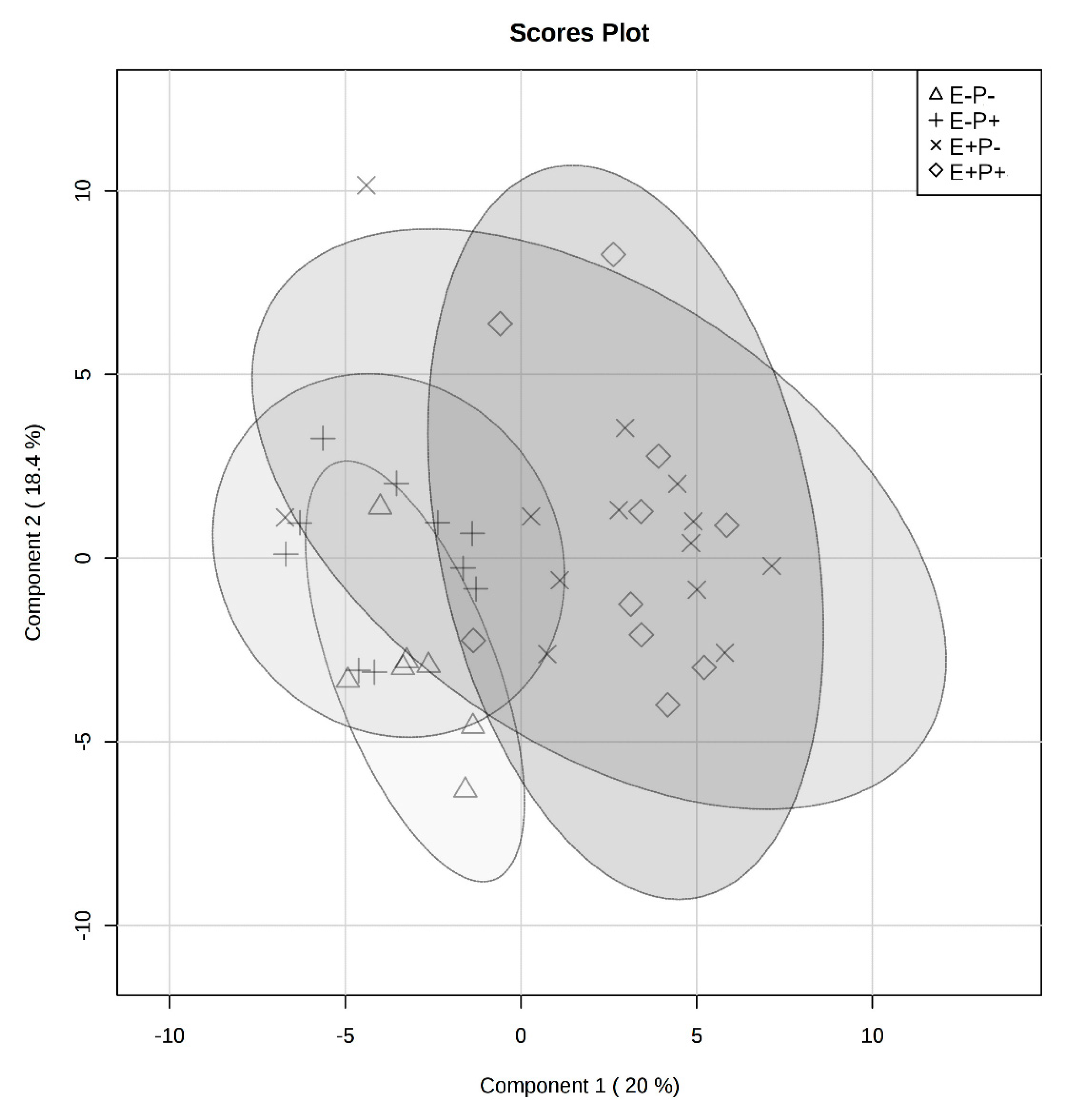 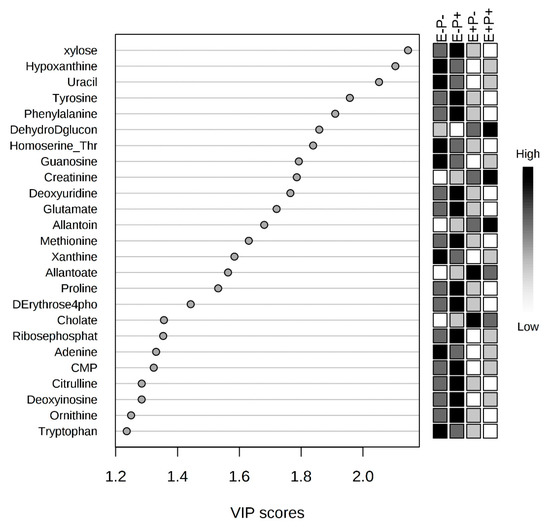 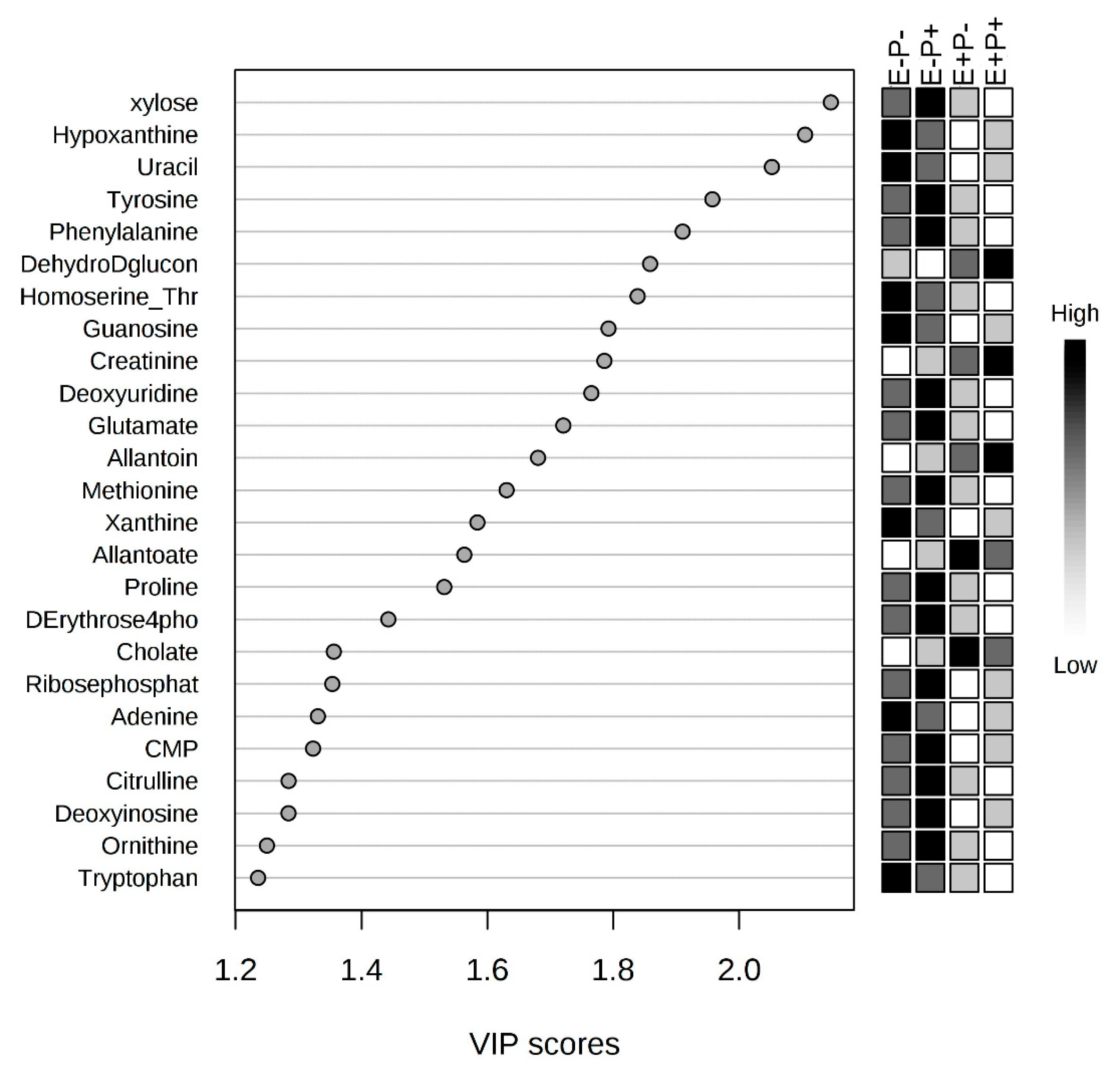 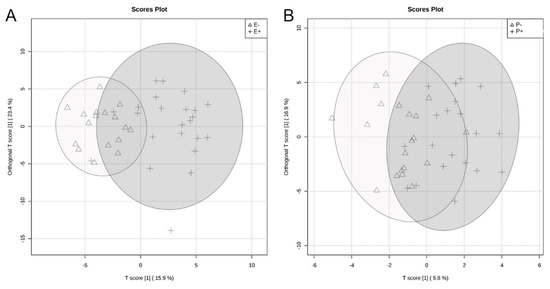 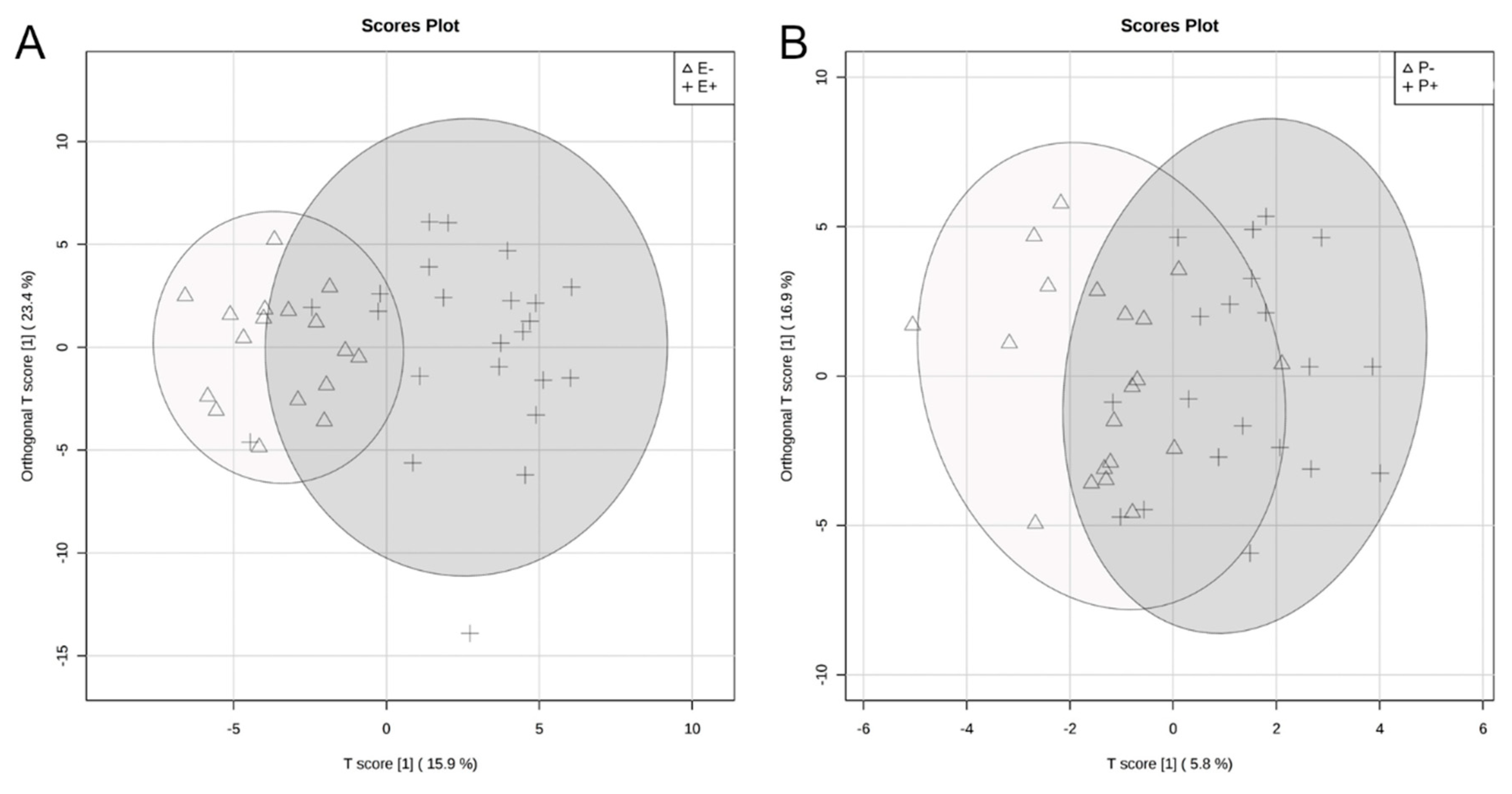 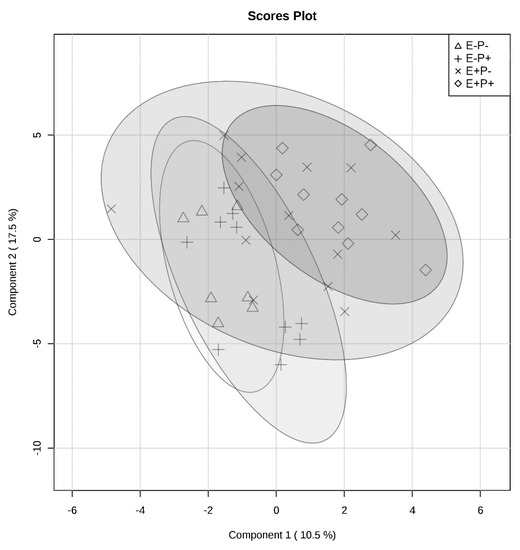 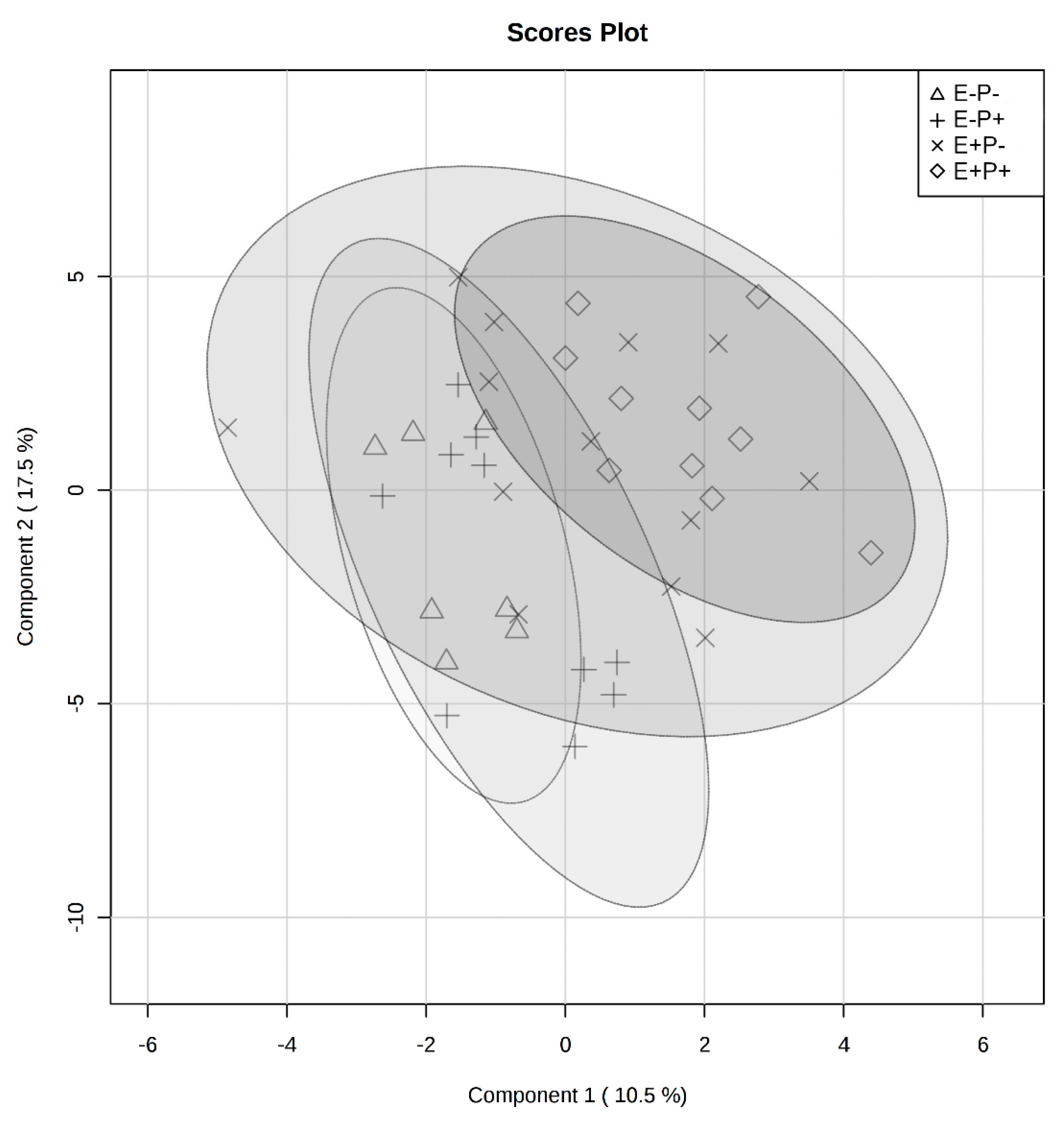 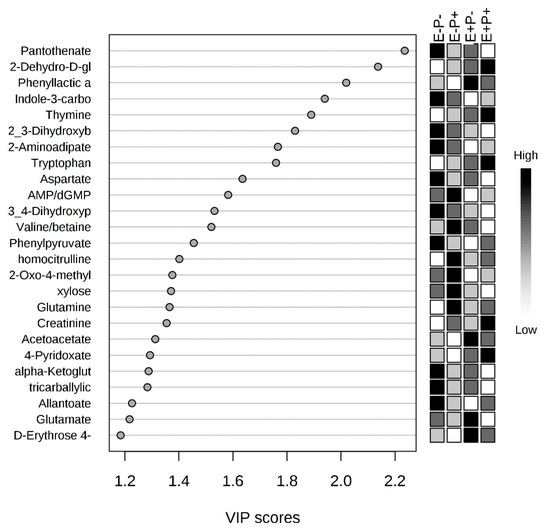 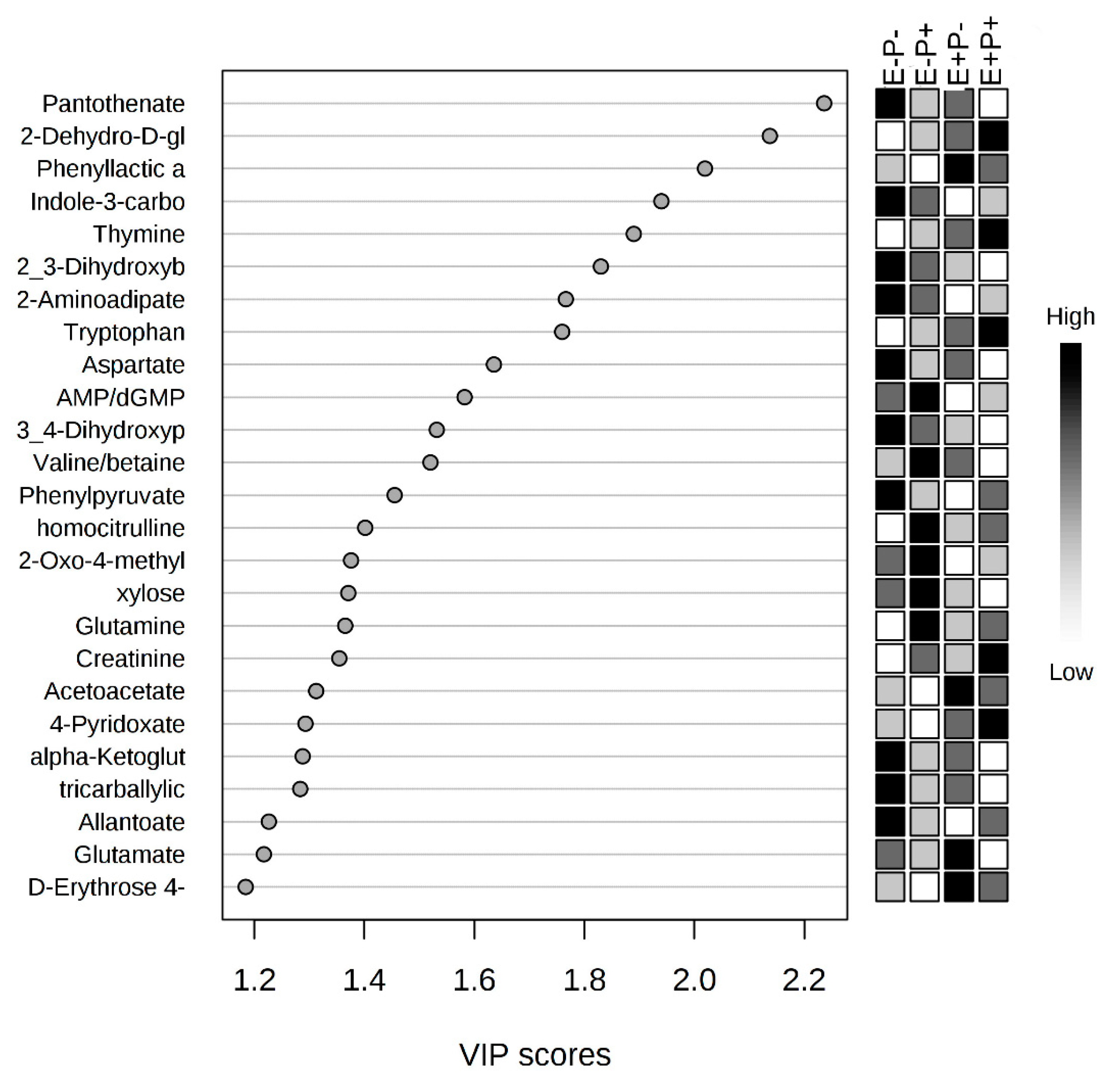 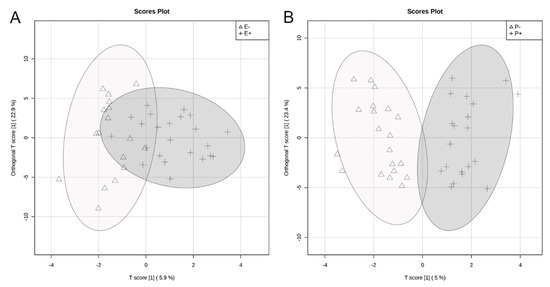 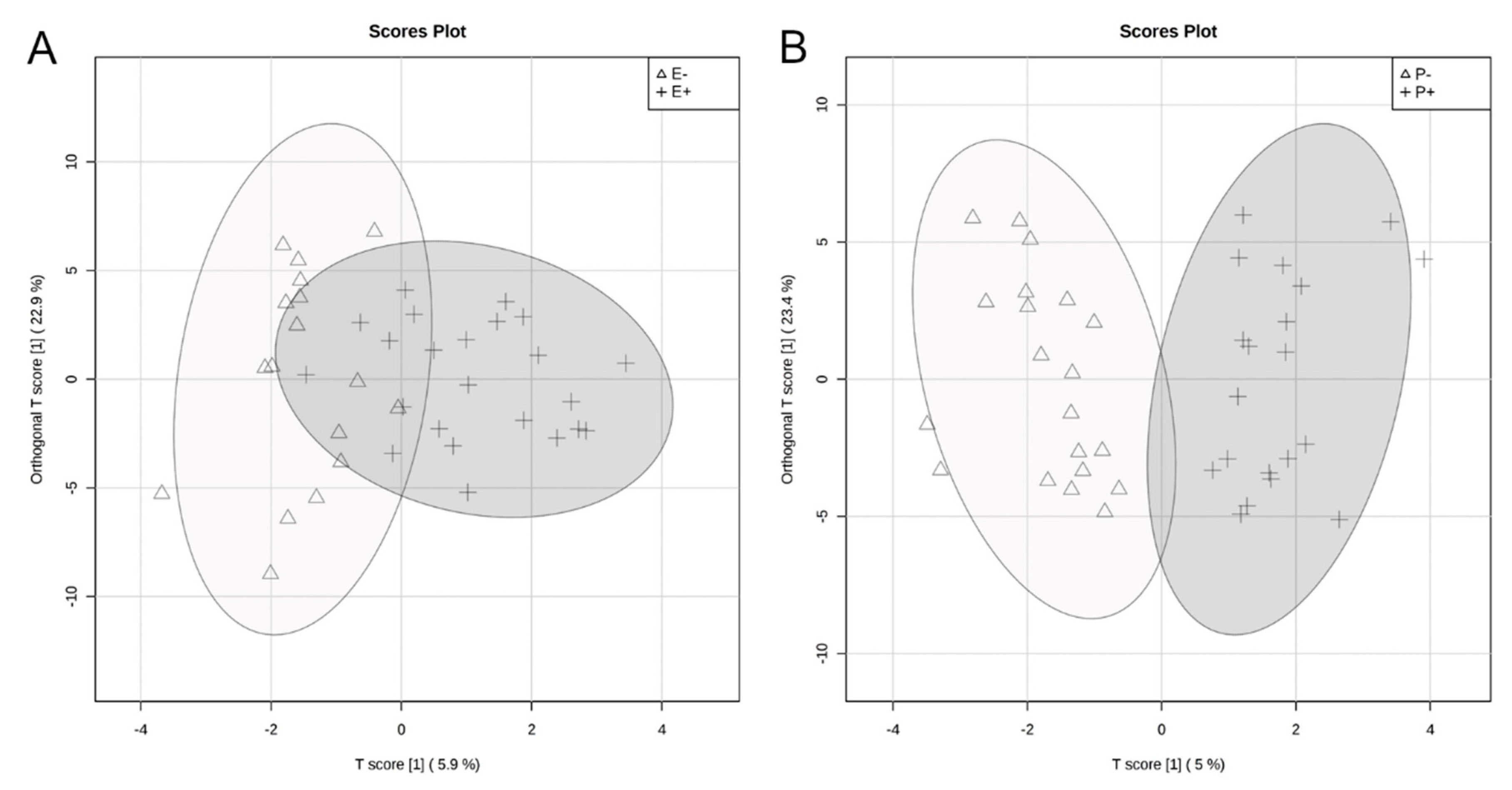