This study presents the application of a suspect screening approach to screen a wide range of natural toxins, including mycotoxins, bacterial toxins, and plant toxins, in surface waters. The method is based on a generic solid-phase extraction procedure, using three sorbent phases in two cartridges that are connected in series, hence covering a wide range of polarities, followed by liquid chromatography coupled to high-resolution mass spectrometry. The acquisition was performed in the full-scan and data-dependent modes while working under positive and negative ionisation conditions. This method was applied in order to assess the natural toxins in the Ter River water reservoirs, which are used to produce drinking water for Barcelona city (Spain). The study was carried out during a period of seven months, covering the expected prior, during, and post-peak blooming periods of the natural toxins. Fifty-three (53) compounds were tentatively identified, and nine of these were confirmed and quantified. Phytotoxins were identified as the most frequent group of natural toxins in the water, particularly the alkaloids group. Finally, the toxins identified to levels 2 and 1 were prioritised according to their bioaccumulation factor, biodegradability, frequency of detection, and toxicity. This screening and prioritisation approach resulted in different natural toxins that should be further assessed for their ecotoxicological effects and considered in future studies. View Full-Text
Keywords: natural toxins; cyanotoxins; phytotoxins; mycotoxins; suspected screening; HRMS natural toxins; cyanotoxins; phytotoxins; mycotoxins; suspected screening; HRMS
►▼ Show Figures 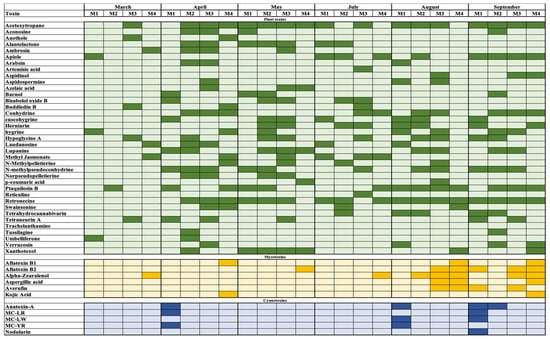