Mycotoxins are common in grains in sub-Saharan Africa and negatively impact human and animal health and production. This study assessed occurrences of mycotoxins, some plant, and bacterial metabolites in 16 dairy and 27 poultry feeds, and 24 feed ingredients from Machakos town, Kenya, in February and August 2019. We analyzed the samples using a validated multi-toxin liquid chromatography-tandem mass spectrometry method. A total of 153 mycotoxins, plant, and bacterial toxins, were detected in the samples. All the samples were co-contaminated with 21 to 116 different mycotoxins and/or metabolites. The commonly occurring and EU regulated mycotoxins reported were; aflatoxins (AFs) (70%; range 0.2–318.5 μg/kg), deoxynivalenol (82%; range 22.2–1037 μg/kg), ergot alkaloids (70%; range 0.4–285.7 μg/kg), fumonisins (90%; range 32.4–14,346 μg/kg), HT-2 toxin (3%; range 11.9–13.8 μg/kg), ochratoxin A (24%; range 1.1–24.3 μg/kg), T-2 toxin (4%; range 2.7–5.2 μg/kg) and zearalenone (94%; range 0.3–910.4 μg/kg). Other unregulated emerging mycotoxins and metabolites including Alternaria toxins, Aspergillus toxins, bacterial metabolites, cytochalasins, depsipeptides, Fusarium metabolites, metabolites from other fungi, Penicillium toxins, phytoestrogens, plant metabolites, and unspecific metabolites were also detected at varying levels. Except for total AFs, where the average contamination level was above the EU regulatory limit, all the other mycotoxins detected had average contamination levels below the limits. Ninety-six percent of all the samples were contaminated with more than one of the EU regulated mycotoxins. These co-occurrences may cause synergistic and additive health effects thereby hindering the growth of the Kenyan livestock sector. View Full-Text
Keywords: aflatoxins; ergot alkaloids; feed safety; food safety; mycotoxins; sub-Saharan Africa aflatoxins; ergot alkaloids; feed safety; food safety; mycotoxins; sub-Saharan Africa
►▼ Show Figures 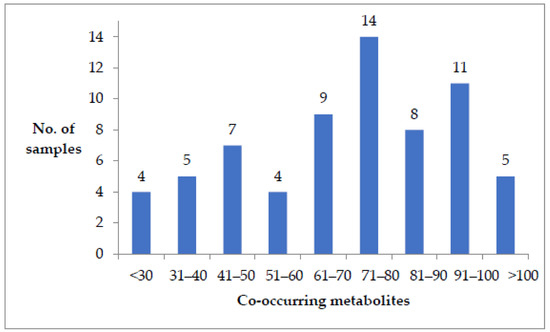