Methicillin-resistant Staphylococcus spp. (MRS) have been identified in several foods, including dairy products. Studies are needed about their occurrence and genetic diversity in the dairy production chain in order to gain a better understanding of their epidemiology and control. This study therefore focuses on isolating and characterizing MRS strains detected in milk used in the production of Brazilian artisanal unpasteurized cheeses. To this end, samples were collected from bovine feces, the hands of milkmen, milking buckets, sieves, unpasteurized milk, whey, water, artisanal unpasteurized cheeses, cheese processing surfaces, cheese handlers, cheese trays, cheese molds, and skimmers at five dairy farms located in the state of São Paulo, Brazil. Colonies suggestive of Staphylococcus spp. were subjected to multiplex PCR to confirm the presence of Staphylococcus aureus and to detect the mecA gene. Sixteen isolates containing mecA gene were detected in samples from unpasteurized cheese and from cheese handlers. None of these isolates were positive to enterotoxin genes. These 16 isolates were subjected to antimicrobial susceptibility tests, which revealed they were resistant to oxacillin, penicillin, and cefepime. Using gene sequencing, the MRS isolates were identified as S. haemolyticus, S. hominis, and S. epidermidis. Furthermore, isolates from cheese handlers’ hands and artisanal unpasteurized cheese presented high genetic similarity by random amplified polymorphic DNA (RAPD-PCR) analysis, which indicates cross contamination during cheese production. Thus, we found that people directly involved in milking and cheese processing activities at small dairy farms are a potential source of contamination of MRS strains in unpasteurized milk and cheese, representing a risk to public health. View Full-Text
Keywords: antimicrobials; MRS; RAPD; public health; resistance antimicrobials; MRS; RAPD; public health; resistance
►▼ Show Figures 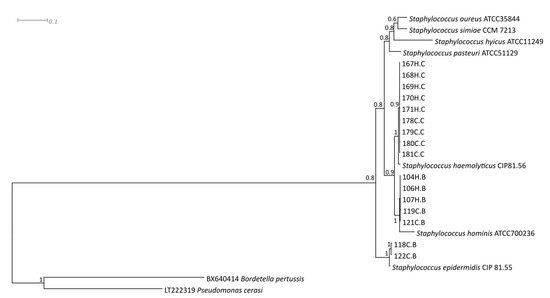