Neuroinflammation plays a significant role in amyotrophic lateral sclerosis (ALS) pathology, leading to the development of therapies targeting inflammation in recent years. Our group has studied the tetanus toxin C-terminal fragment (TTC) as a therapeutic molecule, showing neuroprotective properties in the SOD1G93A mouse model. However, it is unknown whether TTC could have some effect on inflammation. The objective of this study was to assess the effect of TTC on the regulation of inflammatory mediators to elucidate its potential role in modulating inflammation occurring in ALS. After TTC treatment in SOD1G93A mice, levels of eotaxin-1, interleukin (IL)-2, IL-6 and macrophage inflammatory protein (MIP)-1 alpha (α) and galectin-1 were analyzed by immunoassays in plasma samples, whilst protein expression of caspase-1, IL-1β, IL-6 and NOD-, LRR- and pyrin domain-containing protein 3 (NLRP3) was measured in the spinal cord, extensor digitorum longus (EDL) muscle and soleus (SOL) muscle. The results showed reduced levels of IL-6 in spinal cord, EDL and SOL in treated SOD1G93A mice. In addition, TTC showed a different role in the modulation of NLRP3 and caspase-1 depending on the tissue analyzed. In conclusion, our results suggest that TTC could have a potential anti-inflammatory effect by reducing IL-6 levels in tissues drastically affected by the disease. However, further research is needed to study more in depth the anti-inflammatory effect of TTC in ALS.
Keywords: TTC; amyotrophic lateral sclerosis; inflammation; SOD1G93A mouse model TTC; amyotrophic lateral sclerosis; inflammation; SOD1G93A mouse model

Amyotrophic lateral sclerosis (ALS) is a devastating neurodegenerative disease characterized by the loss of the cortex, brainstem, and spinal cord motor neurons (MNs). This motoneuron degeneration leads to muscle paralysis and, finally, premature death due to respiratory failure within 2–5 years after diagnosis. There is currently no cure for the disease, although some drugs are used to slow disease progression, such as riluzole, and more recently, edaravone and masitinib [1]. Despite the numerous pathologic mechanisms proposed, the etiology of the majority of ALS cases—sporadic ALS (sALS)—is unknown.
Neuroinflammation is a relevant hallmark in ALS pathology and is characterized by microglial activation, astrogliosis, infiltration of T lymphocytes and monocytes, and overproduction of inflammatory cytokines [2,3,4]. It has been suggested that inflammatory factors may modulate the disease progression and survival rate in ALS. Accordingly, a wide range of pro-inflammatory mediators, such as interleukins, have been deeply studied in recent years with the purpose of identifying a panel, useful to predict the disease course. The interleukins most frequently found dysregulated in ALS were interleukin (IL)-2, IL-6 and IL-17 [5], although there are some controversial results that question the role of these cytokines as reliable biomarkers. More recently, another mechanism associated with the immune system, the NLRP3 inflammasome, has been studied in ALS, showing its involvement in the disease [6,7,8]. NLRP3 inflammasome is an essential mechanism involved in immune responses through the activation of caspase-1 leading to the maturation of IL-1β and IL-18, and the induction of pyroptosis [9]. The cause of the participation of NLRP3 inflammasome in ALS could underlie in the misfolded protein aggregates found in ALS, as they could become damage-associated molecular patterns (DAMPs) and cause direct activation of NLRP3, following the activation of cytokines [10]. In an attempt to modulate the inflammatory mechanisms in ALS, therapies targeting inflammation have emerged in recent years showing promising results, such as the infusion of regulatory T cells (Tregs) [11,12,13].
In view of this, it becomes vital to find therapies aimed to control the dysregulation of the immune system in ALS to mitigate the inflammatory responses that result harmful in the disease. Our group has been studying the potential role of the tetanus toxin C-terminal fragment (TTC) as a therapeutic molecule in ALS during the last decade. Its non-toxic nature and neuroprotective properties have made TTC a potential carrier molecule through the nervous system as well as a therapeutic molecule for neurological disorders [14,15]. Especially in the SOD1G93A mouse model, we demonstrated that naked DNA encoding for TTC treatment ameliorated the decline of hindlimb muscle innervation, significantly delayed the onset of symptoms and functional deficits, improved spinal motor neuron survival, and prolonged lifespan [16]. In addition, our previous in vitro study with the TTC protein have shown similar results [17].
Despite the participation of TTC in several mechanisms dysregulated in ALS, such as apoptosis, it is unknown whether TTC could have some effect at the immunological or inflammatory level. Thus, the aim of this work was to study the possible anti-inflammatory effect of TTC in the SOD1G93A mouse model by studying its effect on the regulation of some pro-inflammatory cytokines previously described altered in ALS, and on NLRP3 inflammasome proteins.

2.1. TTC Did Not Reduce Any Cytokine in Plasma from SOD1G93A Mice

Protein levels of eotaxin-1, galectin-1, IL-2, IL-6 and macrophage inflammatory protein (MIP)-1 alpha (α) were analyzed in serial plasma samples from SOD1G93A mice under TTC treatment and their controls (Table 1). We did not observe statistically significant differences in the levels of any cytokine measured when comparing the two groups of mice. However, levels of eotaxin-1 and MIP-1α were significantly higher at P113 comparing to the levels found at P63 and P92, regardless of treatment. (Figure 1).

2.2. TTC Differently Modulates the Expression of NLRP3, Caspase-1 and IL-6 in Spinal Cord and Two Types of Skeletal Muscle Fibers from SOD1G93A Mice

Caspase-1, IL-1β, IL-6 and NOD-, LRR- and pyrin domain-containing protein 3 (NLRP3) protein expression was quantified in the spinal cord, extensor digitorum longus (EDL) muscle and soleus (SOL) muscle from SOD1G93A mice treated with TTC and their controls at a late stage of the disease (Figure 2). The western blot assay showed that the levels of IL-6 and NLRP3 in the spinal cord and SOL were decreased in the group of mice under TTC treatment compared to their controls. Similarly, we found a downregulation of IL-6 in EDL in the TTC-treated group of mice. In contrast, we could observe different effect of TTC depending on the muscle. NLRP3 protein levels were not found decreased in EDL from the TTC-treated group. On the other hand, caspase-1 was found decreased in EDL and increased in SOL from mice treated with TTC.

Our results suggest that TTC could have a potential anti-inflammatory effect by reducing IL-6 levels in tissues drastically affected by the disease, and also, modulating the expression of NLRP3 inflammasome proteins. Although further research is needed to study more in depth the anti-inflammatory effect of TTC in ALS, this characteristic added to the other properties of TTC previously observed in the SOD1G93A mice may point out TTC as a potential therapeutic molecule for ALS.

Transgenic mice were obtained by mating hemizygous B6SJL-Tg SOD1G93A males (stock number 002726) purchased from The Jackson Laboratory (Bar Harbor, ME, USA) with C57BL/6J × SJL/J F1 hybrid females (B6SJLF1) purchased from Janvier Labs (Saint-Berthevin Cedex, France). The offspring were identified by PCR assay as described in The Jackson Laboratory protocol. The mice were housed at the animal facilities in Centro de Investigación Biomédica de Aragón (CIBA) under a standard light:dark (12:12) cycle. Food and water were provided ad libitum.
All procedures were approved by the Ethic Committee for Animal Experiments from the University of Zaragoza. The care and use of animals were performed accordingly with the Spanish Policy for Animal Protection RD53/2013, which meets the European Union Directive 2010/63 on the protection of animals used for experimental and other scientific purposes. The approval code is the PI14/17 and the approval date: 21 April 2017.

Recombinant TTC protein was kindly provided by José Aguilera from UAB, CIBERNED, Barcelona, Spain. Twelve SOD1G93A mice were injected via intramuscular with 1 μg of TTC recombinant protein at P59, corresponding to the early symptomatic stage. Simultaneously, twelve SOD1G93A mice were injected with phosphate-buffered saline (PBS) as the control group. Groups were sex-balanced (6 males and 6 females in each group) and littermates were equally distributed in both groups. Injections were made weekly until P113, when they were euthanized to proceed to collect the samples. A treatment scheme can be found in the supplementary data, Table S1.

Serial plasma samples were taken from the twenty-four mice at three stages: 63, 92 and 113 days of postnatal life (P63, P922 and P1133), as they correspond to the early symptomatic, late symptomatic and terminal stages, respectively [44,45,46]. Plasma samples at P63 and P92 were obtained from submandibular bleeding, whilst those at terminal stage were collected from blood extracted by cardiac puncture immediately after euthanasia. Blood was extracted and transferred to EDTA coated mini vacutainer tubes (BD Biosciences, San Jose, CA, USA). Then, blood was centrifuged at 3000 rpm for 10 min at 4 °C within 30 min from extraction, plasma was collected and immediately frozen in dry ice and stored at −80 °C.
Spinal cord and two different skeletal muscles, EDL and SOL, were isolated from SOD1G93A mice after euthanized with CO2 at P113. These tissues were immediately frozen in dry ice and stored at −80 °C until processed.

We acknowledge SCT Separación Celular y Citometría from Centro de Investigación Biomédica de Aragón (CIBA) for their help about the methodology of immunoassays. 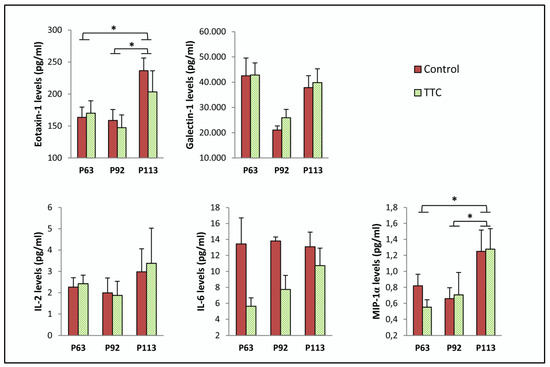 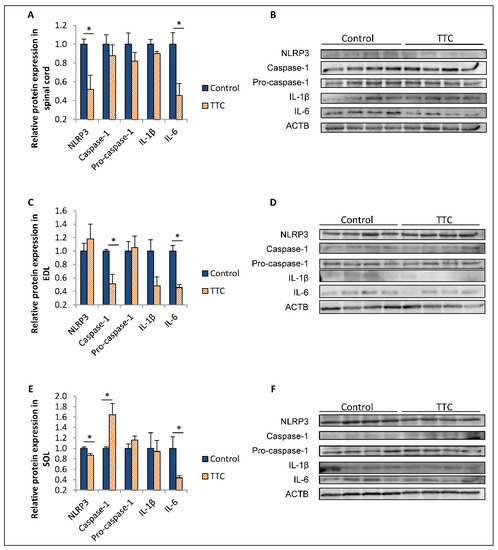 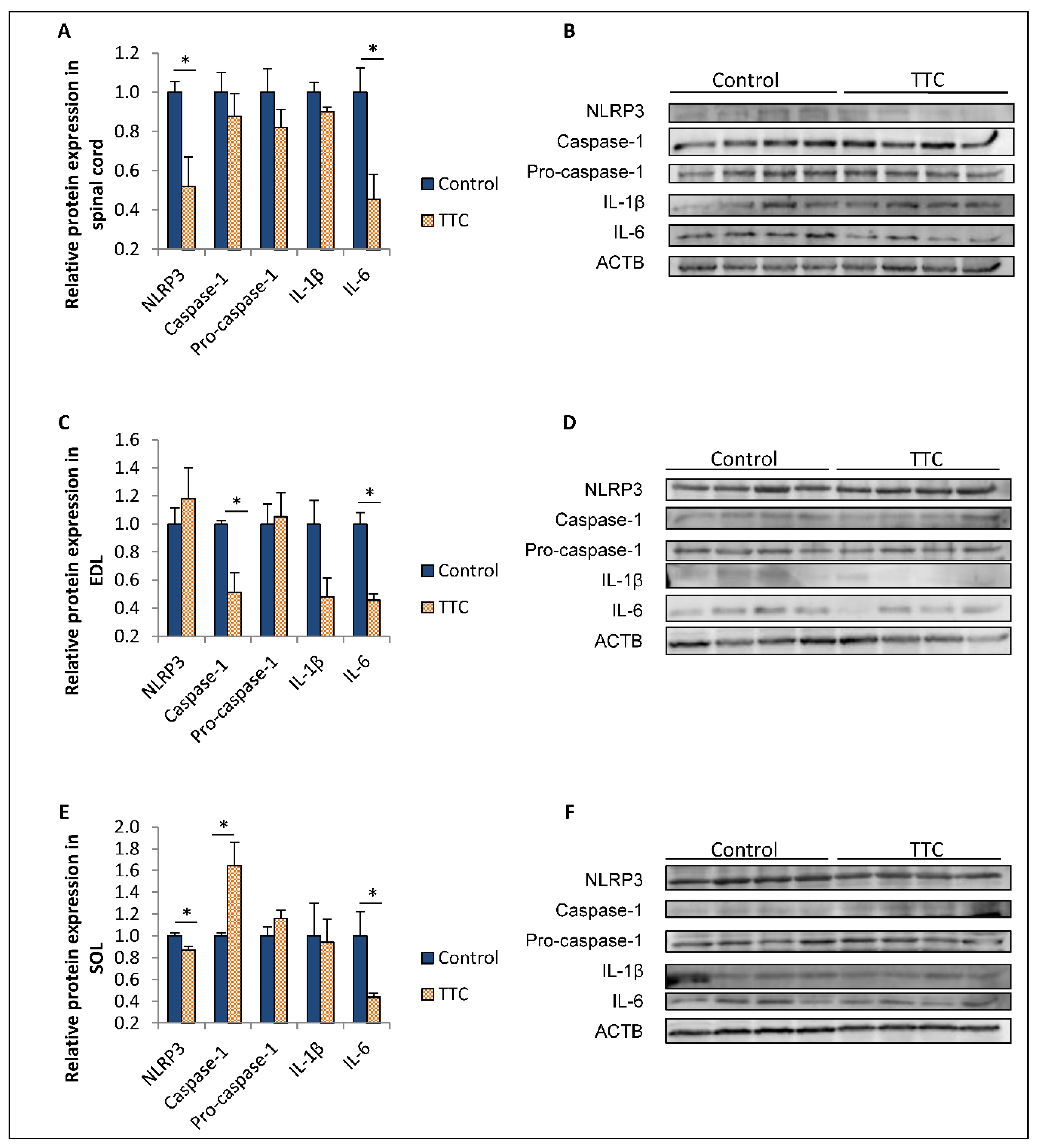