Staphylococcus aureus is one of the most common pathogens that infects the airways of patients with cystic fibrosis (CF) and contributes to respiratory failure. Recently, livestock-associated methicillin-resistant S. aureus (LA-MRSA), usually cultured in farm animals, were detected in CF airways. Although some of these strains are able to establish severe infections in humans, there is limited knowledge about the role of LA-MRSA virulence in CF lung disease. To address this issue, we analyzed LA-MRSA, hospital-associated (HA-) MRSA and methicillin-susceptible S. aureus (MSSA) clinical isolates recovered early in the course of airway infection and several years after persistence in this hostile environment from pulmonary specimens of nine CF patients regarding important virulence traits such as their hemolytic activity, biofilm formation, invasion in airway epithelial cells, cytotoxicity, and antibiotic susceptibility. We detected that CF LA-MRSA isolates were resistant to tetracycline, more hemolytic and cytotoxic than HA-MRSA, and more invasive than MSSA. Despite the residence in the animal host, LA-MRSA still represent a serious threat to humans, as such clones possess a virulence potential similar or even higher than that of HA-MRSA. Furthermore, we confirmed that S. aureus individually adapts to the airways of CF patients, which eventually impedes the success of antistaphylococcal therapy of airway infections in CF. View Full-Text
Keywords: LA-, HA-MRSA; MSSA; cystic fibrosis; virulence; hemolysis; biofilm; invasion; cytotoxicity LA-, HA-MRSA; MSSA; cystic fibrosis; virulence; hemolysis; biofilm; invasion; cytotoxicity
►▼ Show Figures 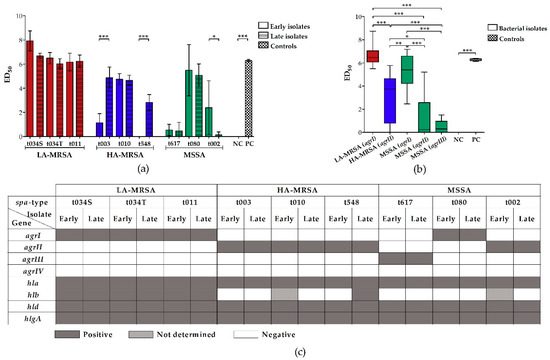