Simultaneous Determination of Deoxynivalenol, Its Modified Forms, Nivalenol and Fusarenone-X in Feedstuffs by the Liquid Chromatography–Tandem Mass Spectrometry Method

Trichothecenes are the most common mycotoxins contaminating small grain cereals worldwide. The C12,13 epoxide group in the trichothecenes was identified as a toxic group posing harm to humans, farm animals, and plants. Aerobic biological de-epoxidation is considered the ideal method of controlling these types of mycotoxins. In this study, we isolated a novel trichothecene mycotoxin-de-epoxidating bacterium, Desulfitobacterium sp. PGC-3-9, from a consortium obtained from the soil of a wheat field known for the occurrence of frequent Fusarium head blight epidemics under aerobic conditions. Along with MMYPF media, a combination of two antibiotics (sulfadiazine and trimethoprim) substantially increased the relative abundance of Desulfitobacterium species from 1.55% (aerobic) to 29.11% (aerobic) and 28.63% (anaerobic). A single colony purified strain, PGC-3-9, was isolated and a 16S rRNA sequencing analysis determined that it was Desulfitobacterium. The PGC-3-9 strain completely de-epoxidated HT-2, deoxynivalenol (DON), nivalenol and 15-acetyl deoxynivalenol, and efficiently eliminated DON in wheat grains under aerobic and anaerobic conditions. The strain PGC-3-9 exhibited high DON de-epoxidation activity at a wide range of pH (6–10) and temperature (15–50 °C) values under both conditions. This strain may be used for the development of detoxification agents in the agriculture and feed industries and the isolation of de-epoxidation enzymes. View Full-Text
Keywords: trichothecene; deoxynivalenol; nivalenol; de-epoxidation; Desulfitobacterium; aerobic and anaerobic detoxification; wheat trichothecene; deoxynivalenol; nivalenol; de-epoxidation; Desulfitobacterium; aerobic and anaerobic detoxification; wheat
►▼ Show Figures 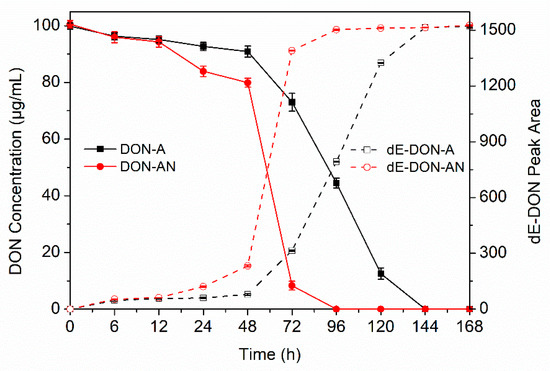