One of the concerns when using grain ingredients in feed formulation for livestock and poultry diets is mycotoxin contamination. Aflatoxin, fumonisin, ochratoxin, trichothecene (deoxynivalenol, T-2 and HT-2) and zearalenone (ZEN) are mycotoxins that have been frequently reported in animal feed. ZEN, which has raised additional concern due to its estrogenic response in animals, is mainly produced by Fusarium graminearum (F. graminearum), F. culmorum, F. cerealis, F. equiseti, F. crookwellense and F. semitectums, and often co-occurs with deoxynivalenol in grains. The commonly elaborated derivatives of ZEN are α-zearalenol, β-zearalenol, zearalanone, α-zearalanol, and β-zearalanol. Other modified and masked forms of ZEN (including the extractable conjugated and non-extractable bound derivatives of ZEN) have also been quantified. In this review, common dose of ZEN in animal feed was summarized. The absorption rate, distribution (“carry-over”), major metabolites, toxicity and estrogenicity of ZEN related to poultry, swine and ruminants are discussed. View Full-Text
Keywords: mycotoxin; zearalenone; modified and masked forms; poultry; swine; ruminants mycotoxin; zearalenone; modified and masked forms; poultry; swine; ruminants
►▼ Show Figures 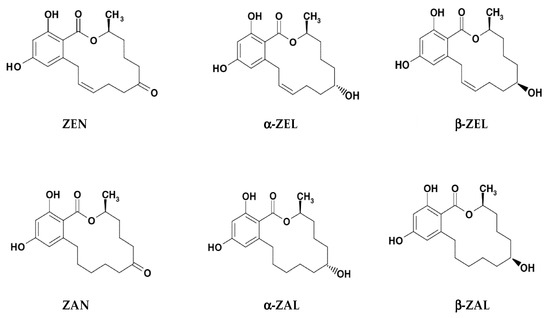