Diversity and Toxigenicity of Fungi that Cause Pineapple Fruitlet Core Rot

Lasiodiplodia theobromae is a plant pathogenic fungus from the family Botryosphaeriaceae that is commonly found in tropical and subtropical regions. It has been associated with many hosts, causing diverse diseases and being responsible for serious damages on economically important crops. A diverse array of bioactive low molecular weight compounds has been described as being produced by L. theobromae cultures. In this review, the existing literature on secondary metabolites of L. theobromae, their bioactivity, and the implications of their occurrence are compiled. Moreover, the effects of abiotic factors (e.g., temperature, nutrient availability) on secondary metabolites production are highlighted, and possible avenues for future research are presented. Currently, a total of 134 chemically defined compounds belonging to the classes of secondary metabolites and fatty acids have been reported from over 30 L. theobromae isolates. Compounds reported include cyclohexenes and cyclohexenones, indoles, jasmonates, lactones, melleins, phenols, and others. Most of the existing bioactivity studies of L. theobromae metabolites have assessed their potential phytotoxic, cytotoxic, and antimicrobial activities. In fact, its host adaptability and its ability to cause diseases in plants as well as in humans may be related to the capacity to produce bioactive compounds directly involved in host–fungus interactions. View Full-Text
Keywords: Botryodiplodia theobromae; Botryosphaeria rhodina; natural products; bioactivity Botryodiplodia theobromae; Botryosphaeria rhodina; natural products; bioactivity
►▼ Show Figures 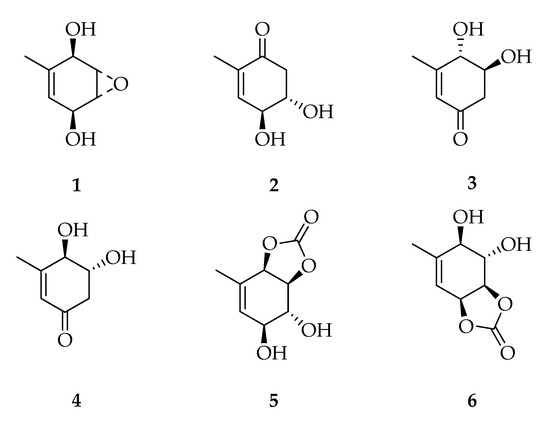