Spider venoms represent an original source of novel compounds with therapeutic and agrochemical potential. Whereas most of the research efforts have focused on large mygalomorph spiders, araneomorph spiders are equally promising but require more sensitive and sophisticated approaches given their limited size and reduced venom yield. Belonging to the latter group, the genus Lycosa (“wolf spiders”) contains many species widely distributed throughout the world. These spiders are ambush predators that do not build webs but instead rely strongly on their venom for prey capture. Lycosa tarantula is one of the largest species of wolf spider, but its venom composition is unknown. Using a combination of RNA sequencing of the venom glands and venom proteomics, we provide the first overview of the peptides and proteins produced by this iconic Mediterranean spider. Beside the typical small disulfide rich neurotoxins, several families of proteins were also identified, including cysteine-rich secretory proteins (CRISP) and Hyaluronidases. Proteomic analysis of the electrically stimulated venom validated 30 of these transcriptomic sequences, including nine putative neurotoxins and eight venom proteins. Interestingly, LC-MS venom profiles of manual versus electric stimulation, as well as female versus male, showed some marked differences in mass distribution. Finally, we also present some preliminary data on the biological activity of L. tarantula crude venom. View Full-Text
Keywords: Spider; toxins; proteomics; transcriptomics; electrophysiology; cytolytic peptide Spider; toxins; proteomics; transcriptomics; electrophysiology; cytolytic peptide
►▼ Show Figures 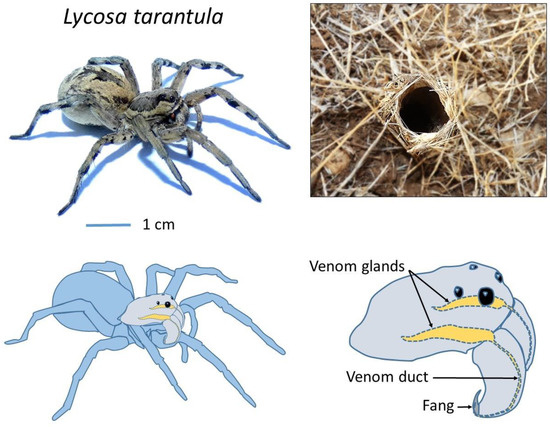