Cyanobacterial Abundance and Microcystin Profiles in Two Southern British Lakes: The Importance of Abiotic and Biotic Interactions
Next Article in Special Issue

2.1. Effect of Uremic Toxins on the Expression of the Monocyte Chemoattractant Protein-1 (MCP-1) and ROS Production in Adipocytes

To examine the effect of uremic toxins on adipocyte inflammation, we compared the ability of each uremic toxin to induce MCP-1 using differentiated 3T3-L1 adipocytes. Four typical anionic protein-bound uremic toxins, indoxyl sulfate (IS), 3-indoleacetic acid (IA), p-cresyl sulfate (PCS) and kynurenic acid (KA), which are known to accumulate at high levels in CKD patients and are difficult to remove by dialysis were selected. Each uremic toxin (1 mM) was added to differentiated 3T3-L1 adipocytes and MCP-1 mRNA expression was measured by quantitative RT-PCR. The findings show that, among the four uremic toxins, a significant MCP-1 mRNA-inducing effect was observed only in the presence of IS (Figure 1A). The effect of IS on MCP-1 mRNA expression was concentration-dependent (0.25-1 mM), as observed in serum from CKD patients (Figure 1B) [15,16,17].
Next, in order to investigate the relationship between the induction of MCP-1 and the production of ROS, the production of ROS by each uremic toxin was examined using the differentiated 3T3-L1 adipocytes. The results indicated that a significant increase in ROS production occurred in the presence of IS, IA or PCS, and, among them, the highest ROS production was observed in the presence of IS (Figure 1C). In addition, IS was found to increase ROS production in a concentration-dependent manner (Figure 1D). These data suggest that ROS production by IS might contribute to the induction of MCP-1.

2.2. Molecular Mechanism of MCP-1 Induction by IS

IS is taken up by an organic anion transporter (OAT) in renal tubular cells, vascular endothelial cells, vascular smooth muscle cells and osteoblasts [18,19,20,21]. First, in order to investigate the pathway for MCP-1 induction by IS in adipocytes, the expression of OAT3 in adipocytes was evaluated by western blotting. As a result, similar to human renal proximal tubular epithelial cells (HK-2 cells), which were used as a positive control, a band was observed at 59 kDa, showing that OAT3 is expressed in differentiated 3T3-L1 adipocytes (Figure S1A). Probenecid, an OAT inhibitor, significantly suppressed the MCP-1 expression and ROS production induced by IS (Figure 1E,F). In addition, an NADPH oxidase inhibitor (diphenyleneiodonium chloride: DPI) or an antioxidant, N-acetylcysteine (NAC), significantly suppressed the IS-induced expression of MCP-1 and ROS production (Figure 1E,F). It was also found that IS increased the expression of NOX4, a subunit of NADPH oxidase, and that this effect was concentration-dependent (Supplementary Figure S1B), strongly suggesting that IS activates NADPH oxidase to produce ROS. These data indicate that IS is taken up by adipocytes via OAT, and that this leads to an increased production of intracellular ROS through the activation of NADPH oxidase, resulting in the induction of MCP-1 expression.

2.3. Effect of IS on Adipocytes and Macrophage Crosstalk

2.4. In Vivo Distribution of IS to Adipose Tissue and Its MCP-1 Inducing Effect: A Study Using IS-Overloaded Mice

2.5. Effect of AST-120 on Adipocyte Inflammation in 5/6-Nephrectomized CKD Mice

Finally, we investigated the effect of AST-120 on adipocyte inflammation in 5/6-nephrectomized CKD mice. AST-120 suppresses the absorption of indole, an IS precursor, from the intestinal tract, thereby lowering the IS levels in the body. As a CKD model, 5/6-nephrectomized mice were prepared and divided into three groups; (1) Sham group; (2) CKD group; and 3) CKD + AST-120 administration group, after randomization at 4 weeks after the nephrectomy. The AST-120-administered group was fed a diet containing 8% AST-120 for 24 weeks. At 28 weeks after the nephrectomy, no significant differences in blood urea nitrogen (BUN) and serum creatinine (SCr) were found between the CKD group and the CKD + AST-120 administration group (Table 1). The elevated IS levels in plasma and epididymal adipose tissue in CKD mice were significantly suppressed by the administration of AST-120 (Figure 4A,B). Regarding the distribution of IS in epididymal adipose tissue, similar results were obtained by immunostaining using an anti-IS antibody (Figure 4C).
Oxidative stress (Nitro-Tyr) (Figure 4C), MCP-1 (Figure 4D) and F4/80 (Figure 4C,E) in epididymal adipose tissue were significantly increased in the CKD mice, and these increases were suppressed by the administration of AST-120 (Figure 4C–E). The expression of the proinflammatory adipocytokine TNF-α mRNA in epididymal adipose tissue was significantly increased in the CKD mice, but AST-120 administration suppressed this effect (Figure 4F). These results are consistent with the above in vitro data, and suggest that IS contributes to adipose tissue inflammation in CKD pathogenesis. In addition, we also found that AST-120 was effective in reducing CKD-induced adipose tissue inflammation.

The reverse transcription of total RNA from differentiated adipocytes and adipose tissue by the RNAiso plus (Takara Bio) was performed using a PrimeScript RT Master Mix (Takara Bio Tokyo, Japan). Quantitative RT-PCR was performed under an iCycler thermal cycler (Bio-Rad Laboratories, Hercules, CA, USA) using SYBR Premix Ex TaqII (Takara Bio). Performed by quantitative RT-PCR, as described in a previous report [8], and the primers used are listed in the Table S1. GAPDH was used as an internal control.

5.5. Measurement of the Recruitment of Macrophages to Adipocytes

The 3T3-L1 cells were differentiated into adipocytes on glass coverslips. The differentiated adipocytes and RAW264.7 macrophages were co-cultured in Transwell plates (differentiated adipocytes in the lower side and RAW264.7 macrophage in the upper side; pore size, 4 μm) in the presence or absence of IS (1 mM: IS was added in the lower side) for 24 h. After discarding the upper plates, the cells on the coverslips (lower side) were washed three times with PBS, fixed with 3.7% paraformaldehyde, permeabilized by treatment with PBS in 0.5% Triton X-100 (PBS-T), incubated with 0.1% PBS-T containing 3% bovine serum albumin for blocking for 1 h, and subsequently incubated with F4/80 monoclonal antibody at room temperature for 1 h and washed with 0.1% PBS-T. The cells were then incubated at room temperature with FITC-conjugated secondary antibodies. The coverslips were rinsed and placed on a glass slide with a mounting solution containing 4’,6-diamino-2-phenylindole. The cells were then visualized using a fluorescence microscope (BZ-X700: Keyence Inc. Japan), and the F4/80-positive cells were quantitated using an imaging analysis program (BZ-X Analyzer).

All animal experiments were carried out in accordance with approved the guidelines of Kumamoto University for the care and use of laboratory animals. All animal experiments were conducted using procedures approved by the experimental animal ethics committee at Kumamoto University (the project identification code, A2019-017; date of approval, 03 October, 2019). ICR mice (5 weeks, male) were purchased from Japan SLC (Shizuoka, Japan) and bred on a 12 h day/night cycle. Mice were administrated with IS (100 mg/kg/day, ip). The control mice were administrated with PBS at the same volume. At 1 h after administration, the mice were anesthetized with diethyl ether and blood, epididymal adipose tissue were collected.
The 5/6-nephrectomized model mice were produced in a two-step surgery procedure, according to previous reports [8]. In summary, two-thirds of the right kidney was removed, and 1 week later, the left kidney was completely removed. At 4 weeks after the final surgery, the mice were randomized by blood urea nitrogen (BUN) and body weight. The mice were assigned to AST-120 (charcoal oral absorbent, 8 w/w% in powder diet) treatment groups. Sham-operated mice and control mice (CKD-operated mice) received a normal diet and water. At 24 weeks after the final surgery, the mice were sacrificed, and blood, epididymal adipose tissue collected.

IS levels in the plasma and adipose tissue were measured by an HPLC method, as described previously [7]. In brief, plasma or a adipose tissue homogenate extracted with RIPA buffer containing 150 mM NaCl, 1% nonidet P-40, 10 mM Tris-HCl (pH 7.4), and 1% protease inhibitor cocktail (Nacalai Tesque, Kyoto, Japan) was mixed with acetonitrile (1:9, v/v for the plasma sample or 1:3, v/v for the tissue homogenate sample) and centrifuged at 12,000× g for 10 min. The supernatant was collected and mixed with ultrapure water (1:1, v/v for a plasma sample or 3:2, v/v for a tissue homogenate sample). The sample was loaded to the HPLC with 20 μL being used for the plasma sample and 50 μL for the tissue homogenate. The HPLC system consisted of an Agilent 1100 series intelligent pump and a fluorescence spectrophotometer. A Shiseido (Tokyo, Japan) CAPCELL PAK C18 column (150 × 2.0 mm, 5 μm) was used as the stationary phase. The mobile phase consisted of 0.2 M acetate buffer (pH 4.0)-acetonitrile (3:1, v/v) for IS. The flow rate was 1.0 mL/min. Indoxyl sulfate was detected by means of a fluorescence monitor, with excitation/emission wavelengths set to 280 nm and 375 nm, respectively.

BUN and serum creatinine were measured using FUJI DRI-CHEM (Fujifilm, Tokyo, Japan). The values for the biochemical evaluation in plasma from CKD mice are listed in Table 1.

Since no continuous variables were normally distributed according to the frequency distribution and Q-Q plot, the Mann-Whitney U test was used for comparisons. A value of p < 0.05 was considered to be statistically significant. Multiple comparisons were corrected using Bonferroni’s method, and values of p < 0.05/n were considered to be statistically significant after correcting the number of comparisons made in the Statistical Analysis of the revised manuscript. 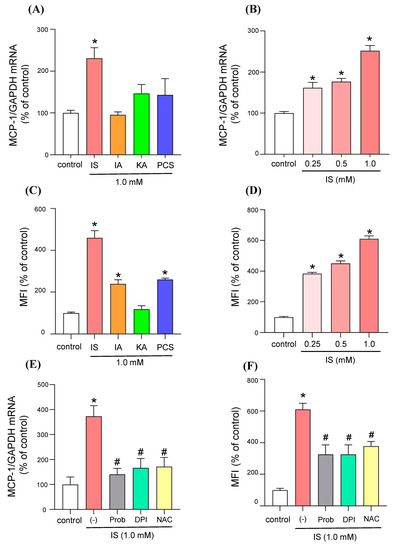 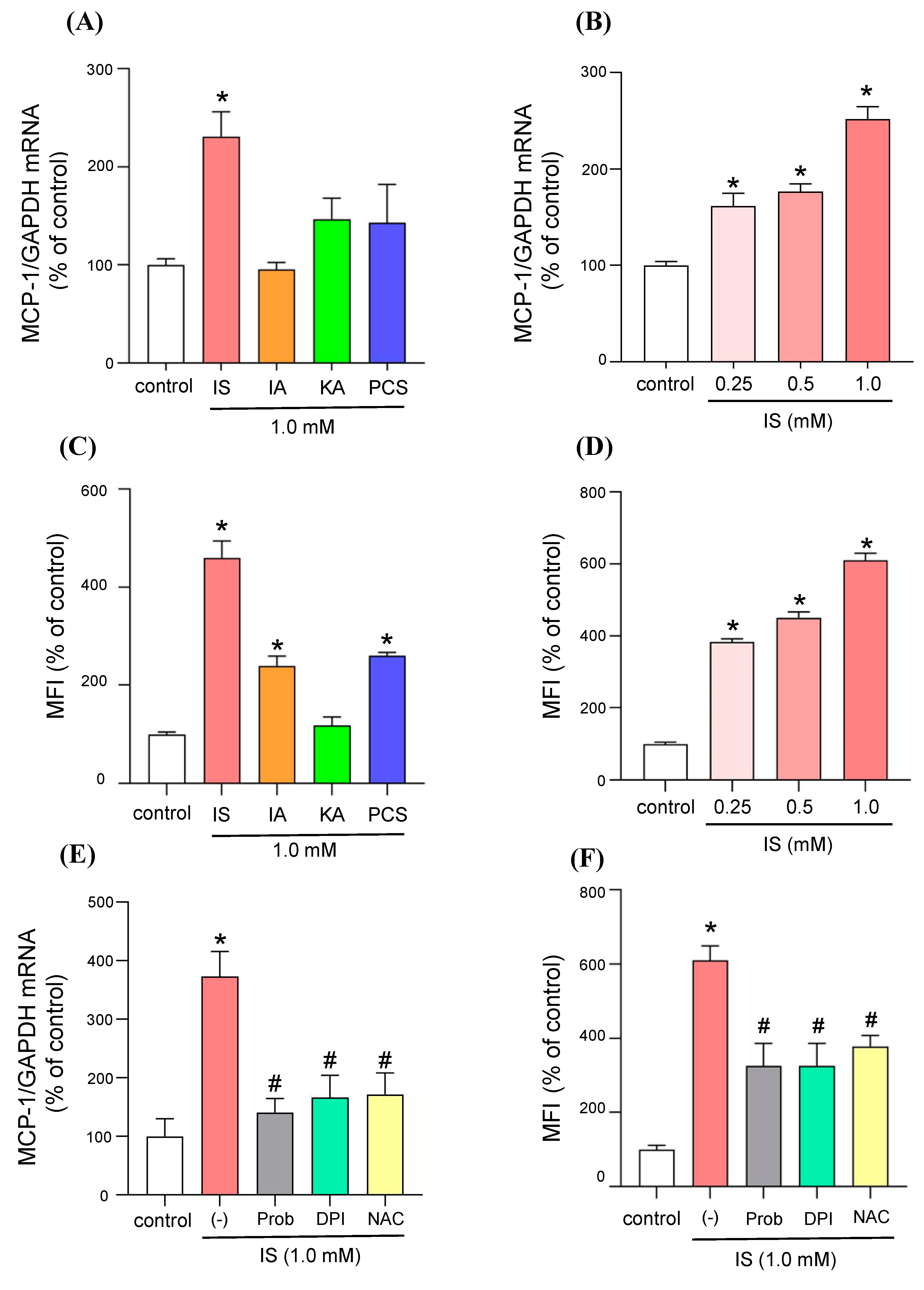 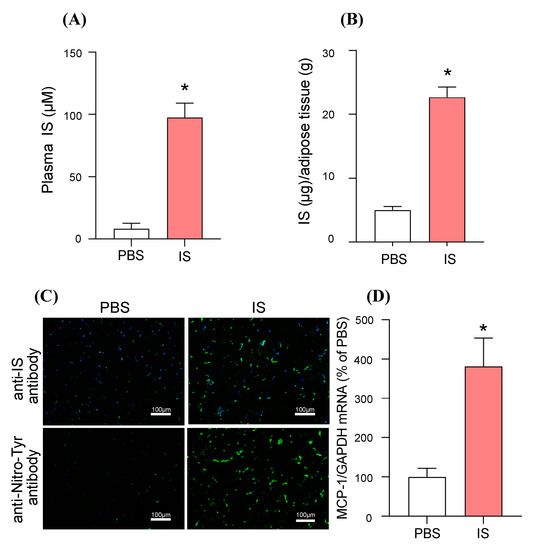 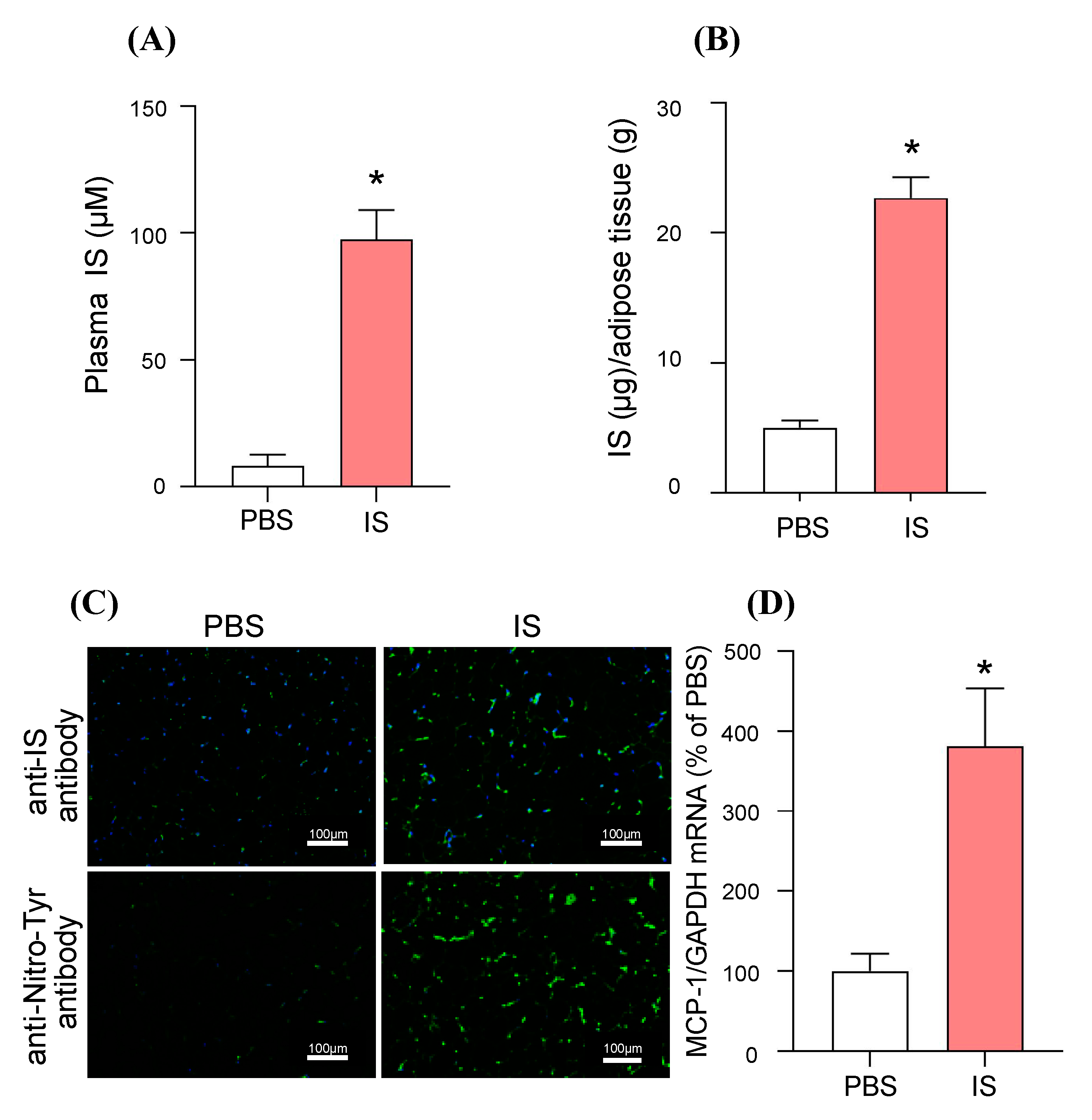 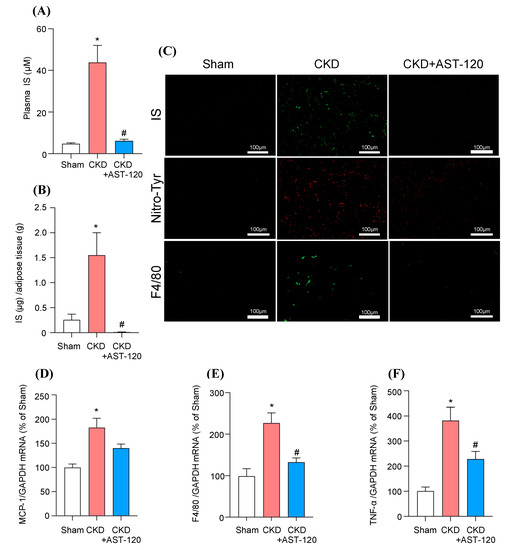 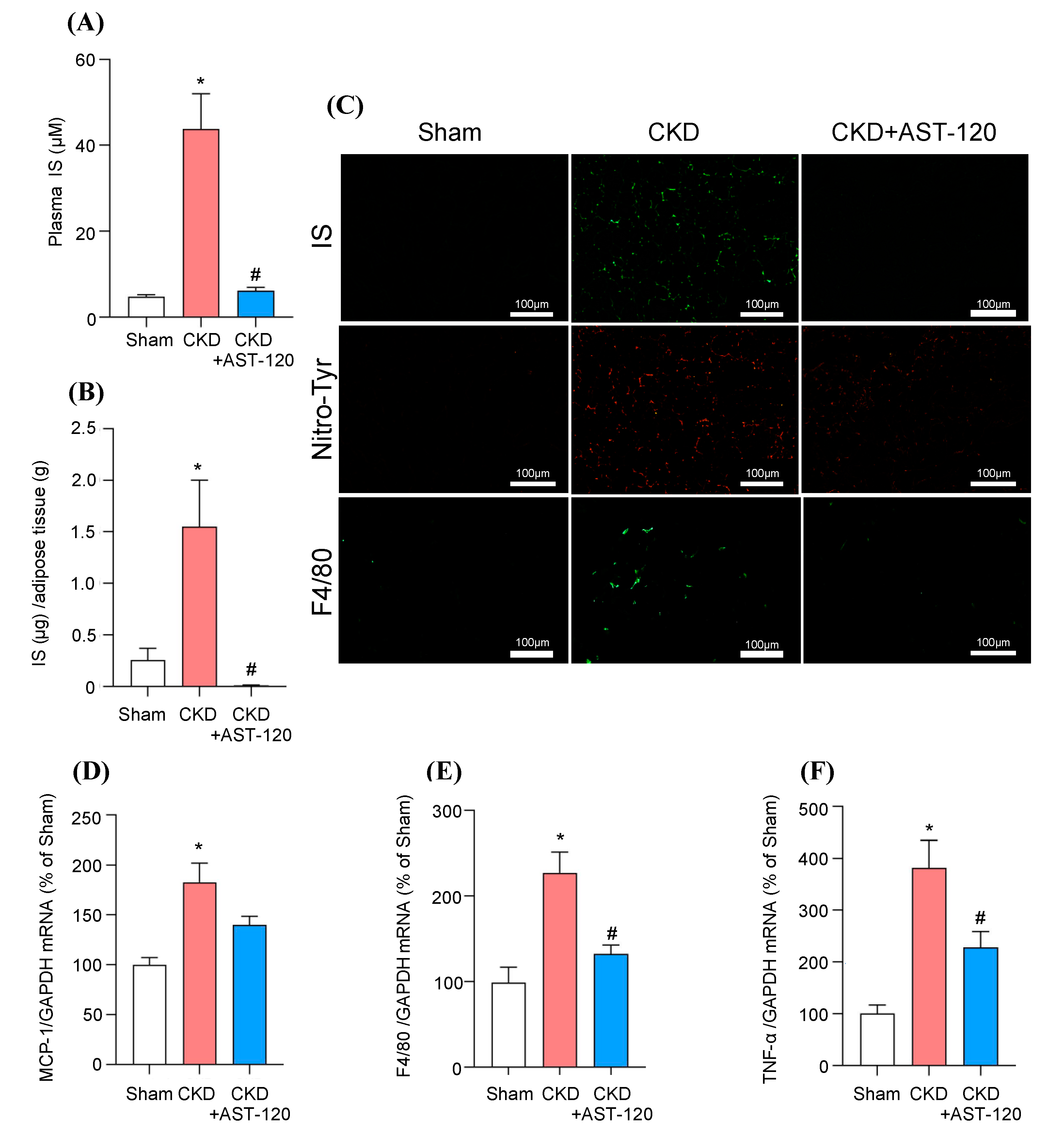