Interaction of Macrophages and Cholesterol-Dependent Cytolysins: The Impact on Immune Response and Cellular Survival
Next Article in Special Issue

The Cytolethal Distending Toxin (CDT) is produced by many Gram-negative pathogenic bacteria responsible for major foodborne diseases worldwide. CDT induces DNA damage and cell cycle arrest in host-cells, eventually leading to senescence or apoptosis. According to structural and sequence comparison, the catalytic subunit CdtB is suggested to possess both nuclease and phosphatase activities, carried by a single catalytic site. However, the impact of each activity on cell-host toxicity is yet to be characterized. Here, we analyze the consequences of cell exposure to different CDT mutated on key CdtB residues, focusing on cell viability, cell cycle defects, and DNA damage induction. A first class of mutant, devoid of any activity, targets putative catalytic (H160A), metal binding (D273R), and DNA binding residues (R117A-R144A-N201A). The second class of mutants (A163R, F156-T158, and the newly identified G114T), which gathers mutations on residues potentially involved in lipid substrate binding, has only partially lost its toxic effects. However, their defects are alleviated when CdtB is artificially introduced inside cells, except for the F156-T158 double mutant that is defective in nuclear addressing. Therefore, our data reveal that CDT toxicity is mainly correlated to CdtB nuclease activity, whereas phosphatase activity may probably be involved in CdtB intracellular trafficking. View Full-Text
Keywords: Cytolethal Distending Toxin; CdtB; phosphatase; nuclease; DNA damage; cytotoxicity; cell cycle checkpoint; site-directed mutagenesis Cytolethal Distending Toxin; CdtB; phosphatase; nuclease; DNA damage; cytotoxicity; cell cycle checkpoint; site-directed mutagenesis
►▼ Show Figures 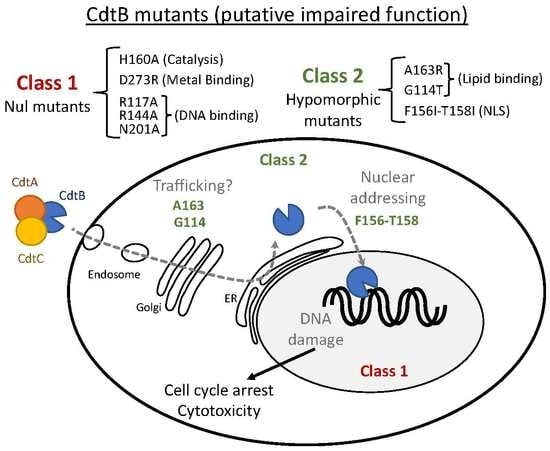