Dihydrodinophysistoxin-1 Produced by Dinophysis norvegica in the Gulf of Maine, USA and Its Accumulation in Shellfish
Previous Article in Special Issue

Behavioral, Physiological, Demographic and Ecological Impacts of Hematophagous and Endoparasitic Insects on an Arctic Ungulate

Joseph B. Hector
and

Selection should favor individuals that acquire, process, and act on relevant environmental signals to avoid predation. Studies have found that scorpions control their use of venom: both when it is released and the total volume expelled. However, this research has not included how a scorpion’s awareness of environmental features influences these decisions. The current study tested 18 Vaejovis carolinianus scorpions (nine females and nine males) by placing them in circular arenas supplied with varying numbers (zero, two, or four) of square refuges and by tracking their movements overnight. The following morning, defensive behaviors were elicited by prodding scorpions on the chelae, prosoma, and metasoma once per second over 90 s. We recorded stings, venom use, chelae pinches, and flee duration. We found strong evidence that, across all behaviors measured, V. carolinianus perceived prods to the prosoma as more threatening than prods to the other locations. We found that stinging was a common behavior and became more dominant as the threat persisted. Though tenuous, we found evidence that scorpions’ defensive behaviors changed based on the number of refuges and that these differences may be sex specific. Our findings suggest that V. carolinianus can assess risk and features of the local environment and, therefore, alter their defensive strategies accordingly. View Full-Text
Keywords: venom optimization; venom metering; hide; retreat; sex differences in behavior; THREAT assessment venom optimization; venom metering; hide; retreat; sex differences in behavior; THREAT assessment
►▼ Show Figures 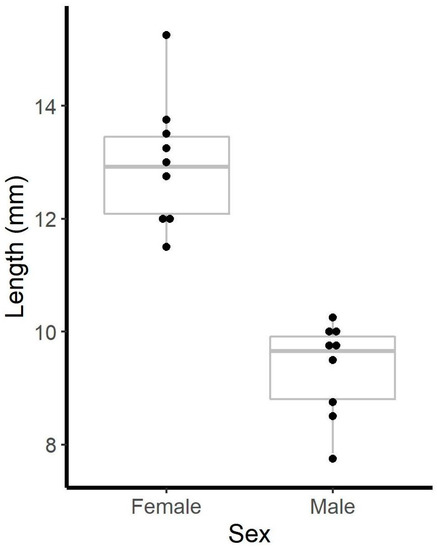