The RTX toxin GtxA expressed by Gallibacterium anatis biovar haemolytica has been proposed a major virulence factor during disease manifestations in the natural host, the chicken. To better understand the role of GtxA in the pathogenesis of G. anatis, we compared the GtxA expressing wildtype strain with its isogenic ∆gtxA mutant that was unable to express GtxA during exposure to chicken macrophage-like HD11 cells. From adhesion and invasion assays, we showed that GtxA appears to promote adhesion and invasion of HD11 cells. By using quantitative RT-PCR, we also demonstrated that the G. anatis expressing GtxA induced a mainly anti-inflammatory (IL-10) host cell response as opposed to the pro-inflammatory (IL-1β, IL-6 and TNF-α) response induced by the GtxA deletion mutant. Interestingly, these results, at least partly, resemble recent responses observed from spleen tissue of chickens infected with the same two bacterial strains. The effect of the GtxA toxin on the type of cell death was less clear. While GtxA clearly induced cell death, our efforts to characterize whether this was due to primarily necrosis or apoptosis through expression analysis of a broad range of apoptosis genes did not reveal clear answers. View Full-Text
Keywords: macrophage; invasion; Gallibacterium anatis; intracellular survival; ∆gtxA mutant macrophage; invasion; Gallibacterium anatis; intracellular survival; ∆gtxA mutant
►▼ Show Figures 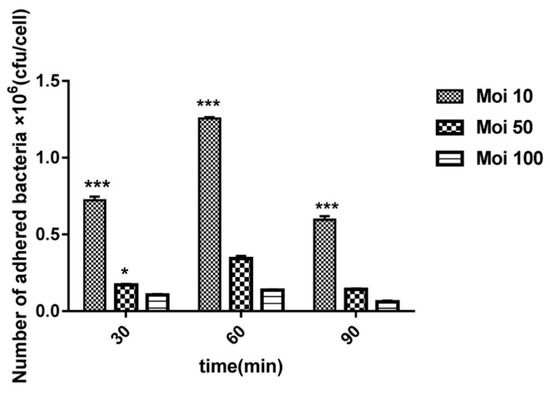