Diversity of the Genomes and Neurotoxins of Strains of Clostridium botulinum Group I and Clostridium sporogenes Associated with Foodborne, Infant and Wound Botulism
Next Article in Special Issue

Staphylococcal Enterotoxin C—An Update on SEC Variants, Their Structure and Properties, and Their Role in Foodborne Intoxications
Previous Article in Special Issue

Are Cyanotoxins the Only Toxic Compound Potentially Present in Microalgae Supplements? Results from a Study of Ecological and Non-Ecological Products

[D-Leu1]MC-LR and MC-LR: A Small–Large Difference: Significantly Different Effects on Phaseolus vulgaris L. (Fabaceae) Growth and Phototropic Response after Single Contact during Imbibition with Each of These Microcystin Variants

[D-Leu1]MC-LR and MC-LR, two microcystins differing in one amino acid, constitute a sanitary and environmental problem owing to their frequent and concomitant presence in water bodies of the Americas and their association with human intoxication during recreational exposure to cyanobacterial bloom. Present in reservoirs used for irrigation as well, they can generate problems in the development of crops such as Phaseolus vulgaris, of nutritional and economic interest to the region. Although numerous works address the toxic effects of MC-LR, information on the toxicity of [D-Leu1]MC-LR is limited. Our objective was to study the toxic effects of [D-Leu1]MC-LR and MC-LR (3.5 µg/ml) on P. vulgaris after a single contact at the imbibition stage. Our findings indicate that 10 days post treatment, [D-Leu1]MC-LR generates morphological and physiological alterations more pronounced than those caused by MC-LR. In addition to the alterations produced by [D-Leu1]MC-LR in the development of seedlings and the structure of the leaves, roots and stems, we also found alterations in leaf stomatal density and conductivity, a longer delay in the phototropic response and a decrease in the maximum curvature angles achieved with respect to that observed for MC-LR. Our findings indicate that these alterations are linked to the greater inhibition of phosphatase activity generated by [D-Leu1]MC-LR, rather than to oxidative damage. We observed that 30 days after treatment with MC-LR, plants presented better development and recovery than those treated with [D-Leu1]MC-LR. Further studies are required on [D-Leu1]MC-LR and MC-LR toxicity and their underlying mechanisms of action. View Full-Text
Keywords: [D-Leu1]microcystin-LR; microcystin-LR; imbibition stage; phototropism; phosphatase inhibition [D-Leu1]microcystin-LR; microcystin-LR; imbibition stage; phototropism; phosphatase inhibition
►▼ Show Figures 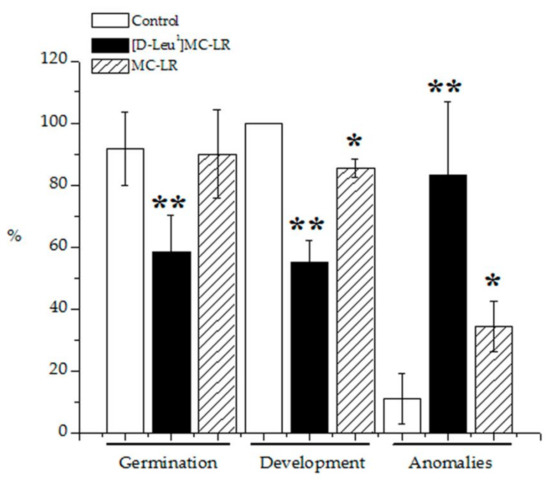