We investigated ochratoxin A (OTA) contamination in raisin samples purchased from Slovak markets and determined the diversity of black-spored aspergilli as potential OTA and fumonisin (FB1 and FB2) producers. The taxonomic identification was performed using sequences of the nuclear ITS1-5.8s-ITS2 region, the calmodulin and beta-tubulin genes. We obtained 239 isolates from eight fungal genera, of which 197 belonged to Aspergillus (82%) and 42 strains (18%) to other fungal genera. OTA contamination was evidenced in 75% of the samples and its level ranged from 0.8 to 10.6 µg/kg. The combination of all three markers used enabled unambiguous identification of A. carbonarius, A. luchuensis, A. niger, A. tubingensis and A. welwitschiae. The dominant coloniser, simultaneously having the highest within-species diversity isolated from our raisin samples, was A. tubingensis. Out of all analysed strains, only A. carbonarius was found to produce OTA, but in relatively high quantity (2477–4382 µg/kg). The production of FB1 and FB2 was evidenced in A. niger strains only. View Full-Text
Keywords: food spoilage; mycotoxin; fungal diversity; calmodulin; beta-tubulin; HPLC food spoilage; mycotoxin; fungal diversity; calmodulin; beta-tubulin; HPLC
►▼ Show Figures 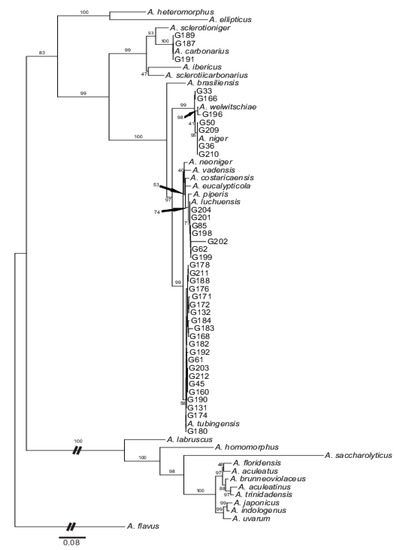