Mass Occurrence of Anatoxin-a- and Dihydroanatoxin-a-Producing Tychonema sp. in Mesotrophic Reservoir Mandichosee (River Lech, Germany) as a Cause of Neurotoxicosis in Dogs

June 2019 bioassay experiments were characterized by a late spring diatom bloom shortly before the onset of a summer Microcystis bloom in Maumee Bay and the very early Planktothrix bloom in Sandusky Bay. In both Maumee and Sandusky Bays, there were high N concentrations—over 200 µmol L−1 nitrate plus nitrite in Maumee Bay and over 100 µmol L−1 nitrate plus nitrite in Sandusky Bay and relatively low P concentrations of 1–2 µmol L−1 dissolved reactive phosphorus (DRP) (Table 1).
In the June Maumee Bay experiment, growth rates significantly differed (p < 0.001) among nutrient treatments, but there was no difference between the undiluted and diluted treatments (p = 0.76). The +P and +P&N treatments resulted in a higher growth rate than the control and +N treatments, indicating P-limited growth, in both the undiluted and 40% dilution treatments, likely due to the high concentrations of N in the bay (Figure 2; Table 1, Tables S1 and S2). Cyanotoxins were not detected in the June Maumee Bay experiment.
In the June Sandusky Bay experiment, nutrient enrichment did not impact growth rates (p = 0.68), but growth rates were lower in the 40% diluted treatments (p = 0.013); Figure 2; Tables S1 and S2), which indicates nutrient-replete conditions. The initial undiluted total microcystin concentration was 0.136 µg/L and total anatoxin concentration was 0.053 µg/L (Tables S3 and S5). Microcystin concentrations increased throughout the experiment in the no dilution treatments but not the 40% dilution (Figure 3). The Sandusky Bay microcystin production rate was slightly yet not significantly affected by nutrient enrichment (p = 0.067), becoming significant in the biomass-normalized analyses (p < 0.001). However, the production rate was lower in the 40% diluted treatments (Figure 3 and Tables S3—S6). The June 2019 Sandusky Bay anatoxin production rate was not affected by dilution treatment with a slight nutrient effect in the biomass-normalized analyses (p < 0.01) (Figure 4).

August experiments were characterized by dense blooms of Microcystis in Maumee Bay and Planktothrix in Sandusky Bay. Maumee Bay had high N concentrations—over 100 µmol L−1 nitrate plus nitrite—but Sandusky Bay had low N concentrations with 6.5 µmol L−1 nitrate plus nitrite (Table 2). Both Maumee and Sandusky Bay had low P concentrations of 0.03 to 0.20 µmol L−1 DRP (Table 2).
Chlorophyll a concentrations decreased throughout incubation of the very dense bloom in the August Maumee Bay experiment, coinciding with negative growth rates (Figure 5). The diluted treatments had reduced algal mortality compared to the undiluted treatments likely due to lower initial starting biomass (p < 0.001). The growth rate was significantly affected by nutrients (p < 0.001) and the interaction between nutrients and dilution (p = 0.012), but there was no discernable pattern, leading to a lack of ecological significance. The initial undiluted total microcystin concentration in the August Maumee Bay experiment was 18.06 µg/L. Microcystin concentration and production rates (Figure 6) followed a similar pattern to chlorophyll with a non-significant nutrient effect (p = 0.14) and significant dilution effect without biomass-normalization (p < 0.001) and a non-significant effect in biomass-normalized analysis (p = 0.5452). Anatoxin was not detected in the Maumee Bay August experiment.
In the August Sandusky Bay experiment, chlorophyll concentration increased throughout the incubation in the three N-only treatments and the + N&P treatment, while it declined in the control and P-only treatment in both the diluted and non-diluted treatments (Figure 5), which indicates N was the primary limiting nutrient. The various forms of N did not exert a discernable difference on growth rates. The highest growth rates were measured in the +N&P treatments, which indicates a secondary P limitation. The dilution effect was also significant (p = 0.004). The initial undiluted anatoxin concentration was 0.596 µg/L (Figure 7). Anatoxin production was primarily N-limited both with and without biomass normalization (p < 0.001), like growth rates, but P was not secondarily limiting. Unlike chlorophyll, which decreased throughout incubation in the control and P-only treatment, anatoxin concentrations in the control and P-only treatment remained constant throughout the incubation due to production rates of anatoxin increasing throughout the incubation.

Our results suggest that nutrient dynamics play a crucial role in the WLE CyanoHABs for both biomass production as well as microcystin and anatoxin production in the eutrophic Sandusky and Maumee Bays. During the peak bloom periods when microcystin and anatoxin concentrations are highest, microcystin production was nutrient deplete and anatoxin production was N-limited. Maumee Bay biomass shifted from P-limited immediately prior to the Microcystis bloom to nutrient deplete during peak bloom, while the Sandusky Bay Planktothrix bloom shifted from nutrient deplete to N-limited from early bloom to peak bloom. A 40% reduction in N and P led to a slight reduction in biomass and microcystin and anatoxin production. However, further studies are needed to investigate the long-term nutrient reduction thresholds needed to control CyanoHABs. With N and P enrichment stimulating the WLE CyanoHABs, there is a need to constrain external loads of both N and P, and impose stricter nutrient-limited conditions in order to help mitigate the CyanoHAB problem in WLE [52,96,97,98]. Our study took place only in eutrophic bays and we showed that a 40% reduction might not be enough in Maumee and Sandusky Bay because growth and toxin production could still be nutrient-saturated. Future studies are needed to determine if a 40% reduction is adequate for the open waters of WLE. Furthermore, an adaptive management approach is needed to determine if the 40% reduction goal needs to be adjusted with changes in land use practices and climate change [99]. Additionally, future studies should focus on drawing direct functional links between nutrient enrichment and cyanotoxin production, e.g., Krausfeldt et al. [36]. Lastly, anatoxin should be more closely monitored in WLE, as it is a potent neurotoxin with human health-associated implications [100].

We performed experimental manipulations of natural Maumee Bay (Oregon, OH, USA) and Sandusky Bay (Sandusky, OH, USA) phytoplankton communities that were collected from nearshore docks (Figure 8; Table S11). Water was pumped from 1 m below the surface into pre-cleaned (flushed with lake water) 20 L carboys using a non-destructive diaphragm pump and was transported to The Ohio State University Stone Laboratory on South Bass Island (Put-in-Bay, OH, USA) (Figure 8).
This experiment deployed in situ bioassays, using 4 L pre-cleaned polyethylene Cubitainers to which natural lake water was added from Maumee and Sandusky Bays using the methodology described in Paerl et al. [101] and Xu et al. [102]. Microcosm treatments were individually amended with either 100 μM N of NO3 (as KNO3), 100 µM N of NH4 (as NH4Cl), 6 µM PO4 (as KH2PO4), 100 µM N and 6 µMP added as a combined addition of 50 µM NO3, 50 µM NH4, and 6 µM PO4, and, in August 2019, urea (50 µM urea to achieve 100 µM N), yielding similar total dissolved nutrient concentrations (for each treatment) and falling within a range matching riverine dissolved inorganic nutrient discharge into Lake Erie nearshore waters. To avoid silica or dissolved inorganic carbon limitation in Cubitainers during the incubation period, we added 50 µM Si as Na2SiO3 and 10 mg L−1 (83.25 µM) DIC as NaHCO3 based on previous Si and DIC values from Hanson et al. [103] and Rockwell et al. [104]. We used a major ion solution (MIS) specific to WLE to provide 40% dilutions to mimic the EPA-recommended reductions in P inputs to WLE as well as a parallel 40% reduction in N, as both N and P have been shown to influence WLE CyanoHAB bloom dynamics [22,39,43]. The 40% dilution control investigated a 40% reduction in both N and P. Incubations were run for 72 h at a lake site near the Stone Laboratory at ambient lake water temperatures and light conditions [23,101,102]. Based on previous work on eutrophic Lake Taihu, China [95], a 72 h maximum incubation period was chosen to minimize “bottle effects”, while having ample time to examine phytoplankton growth, microcystin, and anatoxin production responses.
To perform nutrient dilutions, we developed a major ion solution (MIS) for WLE, which provided a N- and P-free dilution media to minimize hypertonic and hypotonic effects on the organisms in the samples by balancing major dissolved ions in the system (Table 3). As an example, artificial seawater is the MIS for the open ocean. For WLE, we based the ambient ion concentrations on a past study by Chapra et al. [105]. As there is substantial natural variability due to rainfall and evaporative effects and the ions in the MIS are in micromolar concentrations and pulse events change the ions in WLE, these deviations are considered reasonable. The compounds used in the MIS are found in Table S12.

Chlorophyll a, as an indicator of phytoplankton biomass, was measured on subsampled samples by filtering 50 mL of sample water onto Whatman glass fiber filters (GF/F). Filters were frozen at −20 °C and subsequently extracted using a tissue grinder in 90% acetone [107,108]. Chlorophyll a in extracts was measured using the non-acidification method of Welschmeyer [109] on a Turner Designs Trilogy fluorometer calibrated with pure Chlorophyll a standards (Turner Designs, Sunnyvale, CA, USA).

We thank R. Sloup, N. Hall, and B. Abare of the UNC Institute of Marine Sciences, as well as laboratory technicians and students from The Ohio State University and University of Toledo Lake Erie Center at the for their help with experimental work. 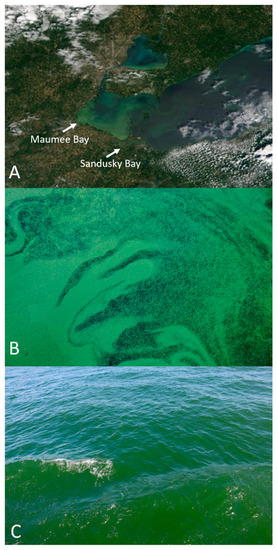 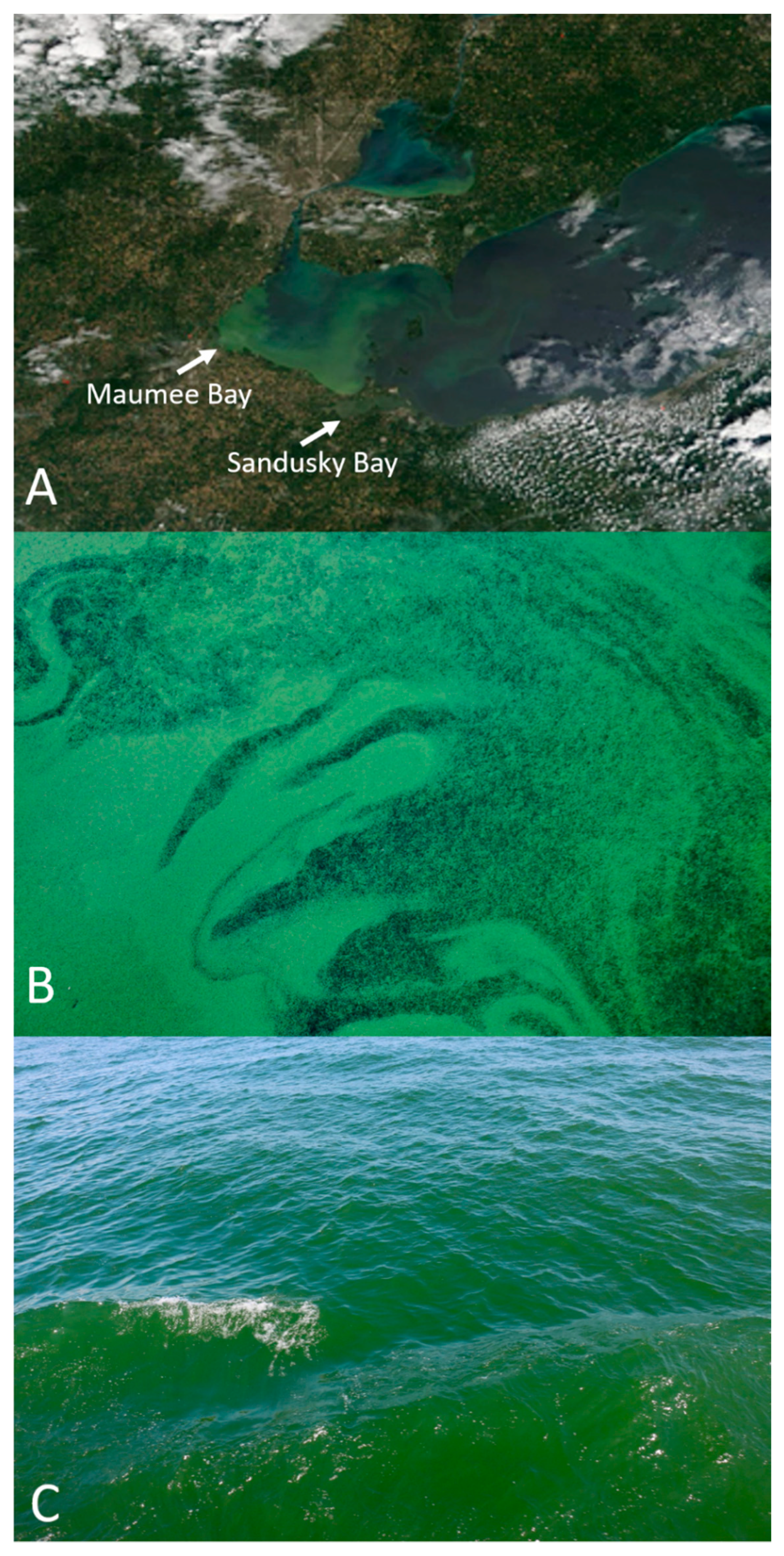 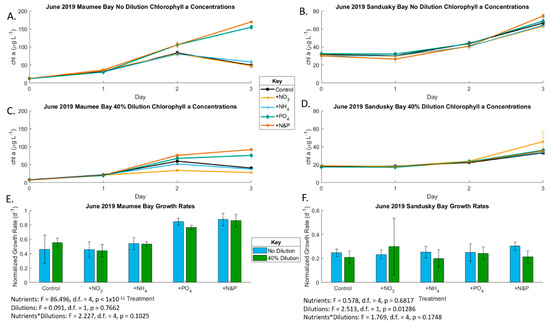 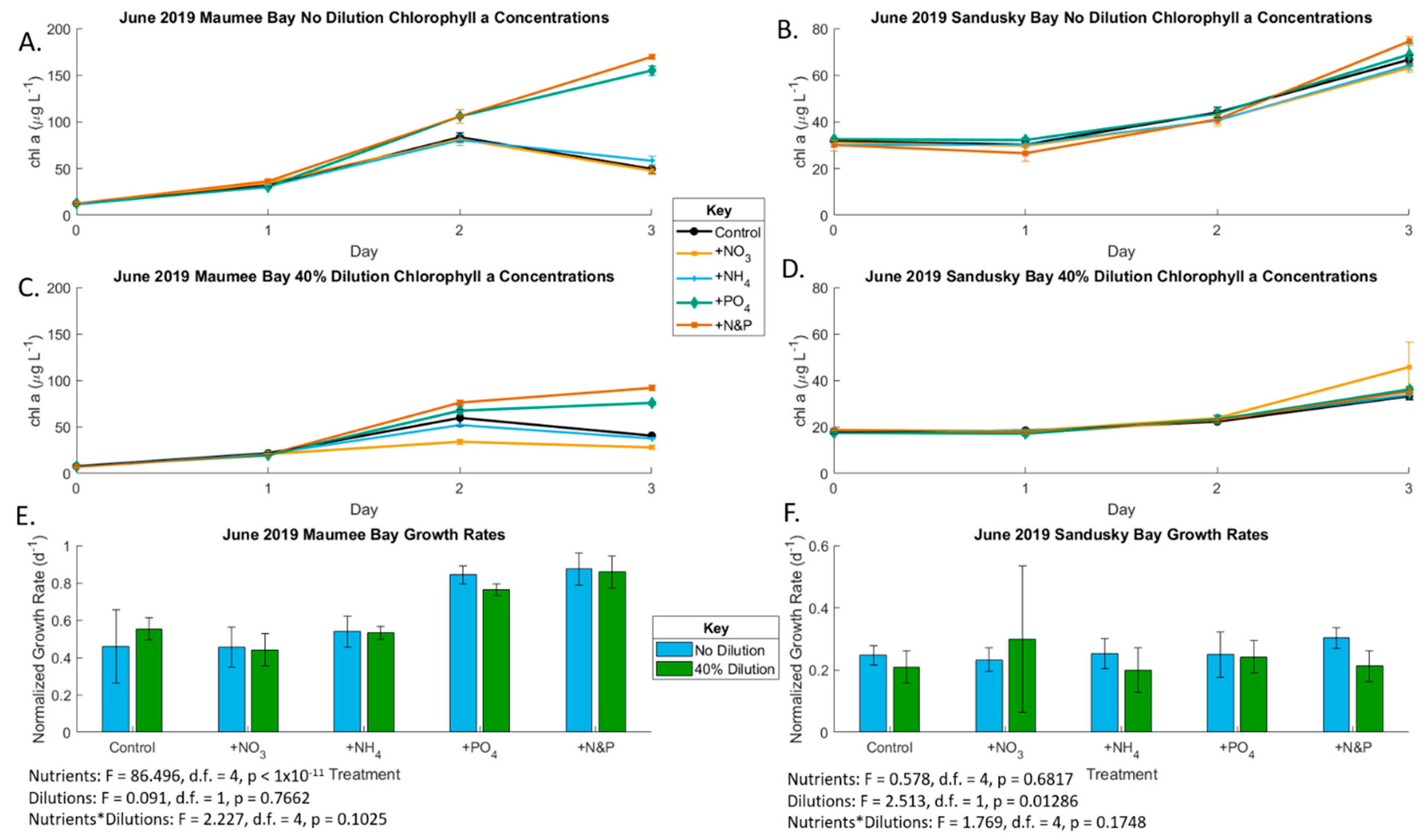 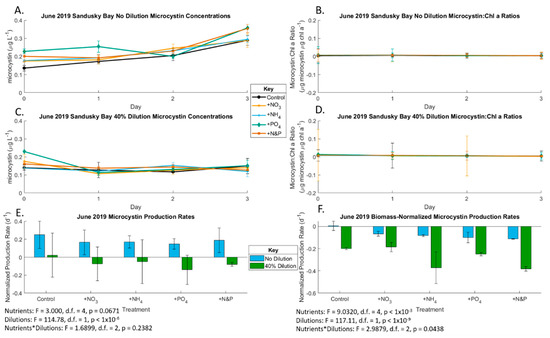 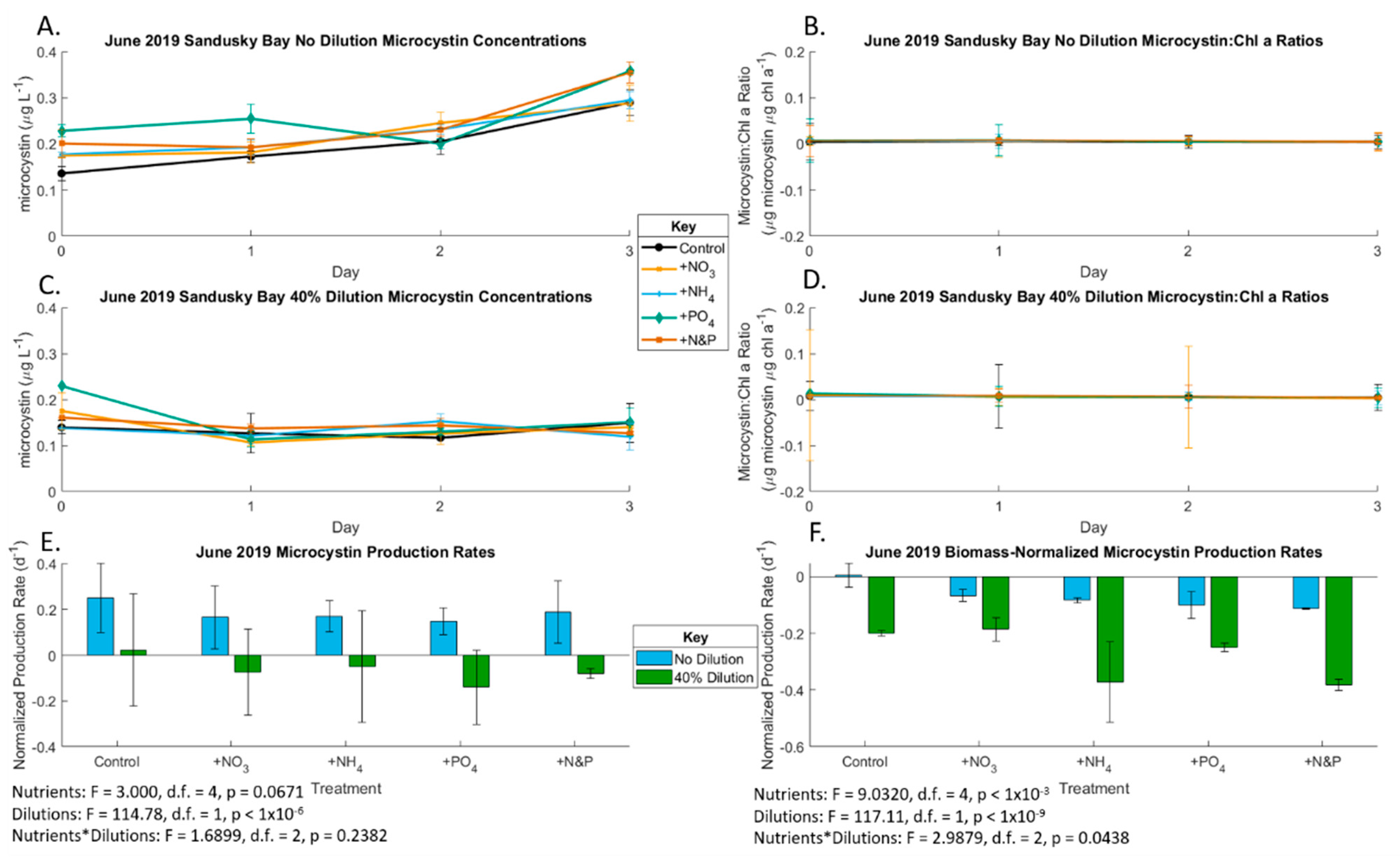 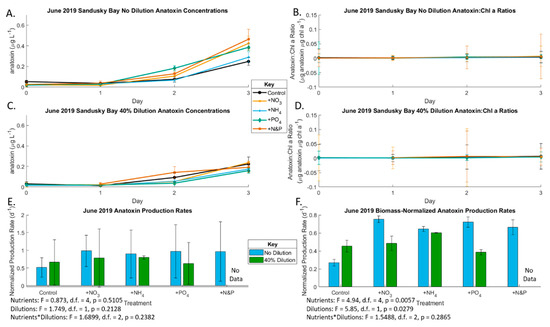 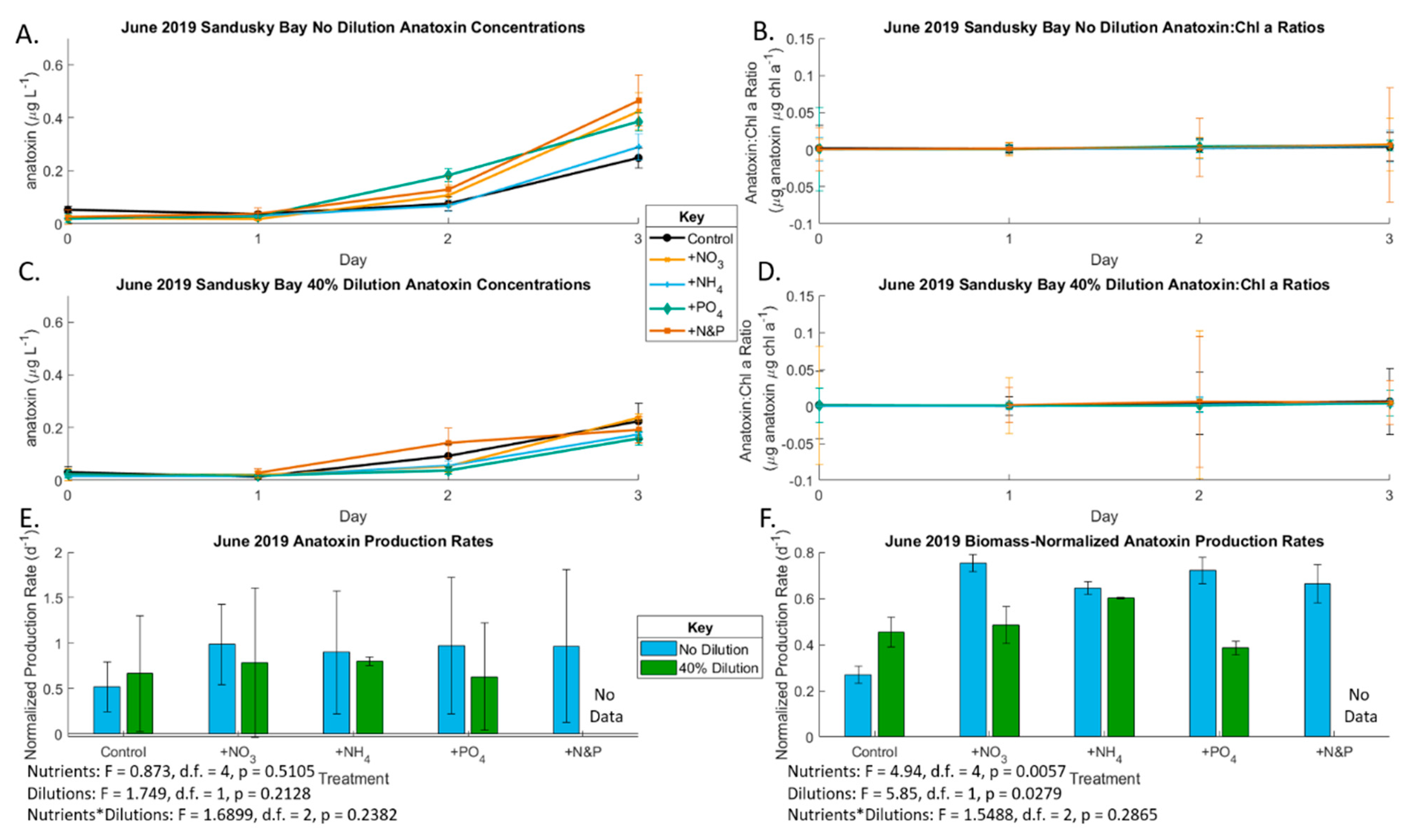 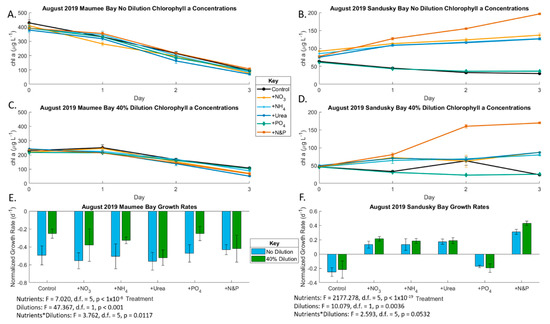 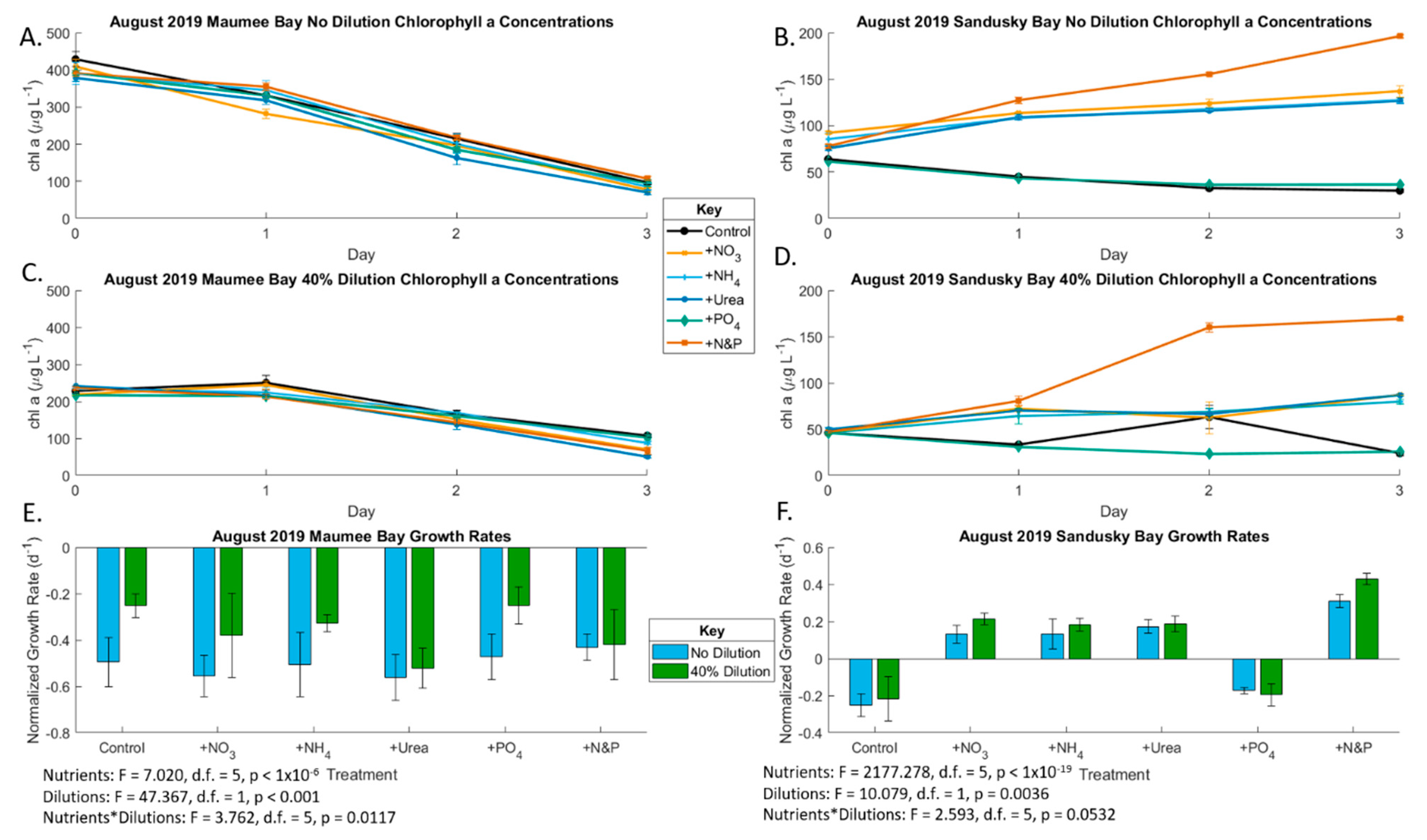 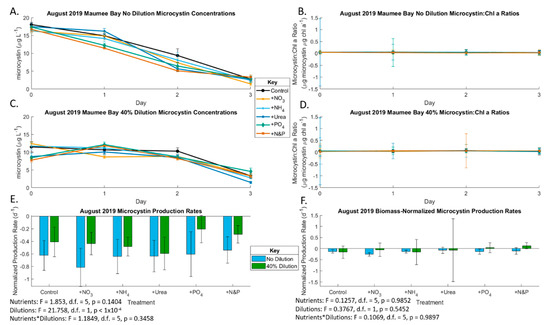 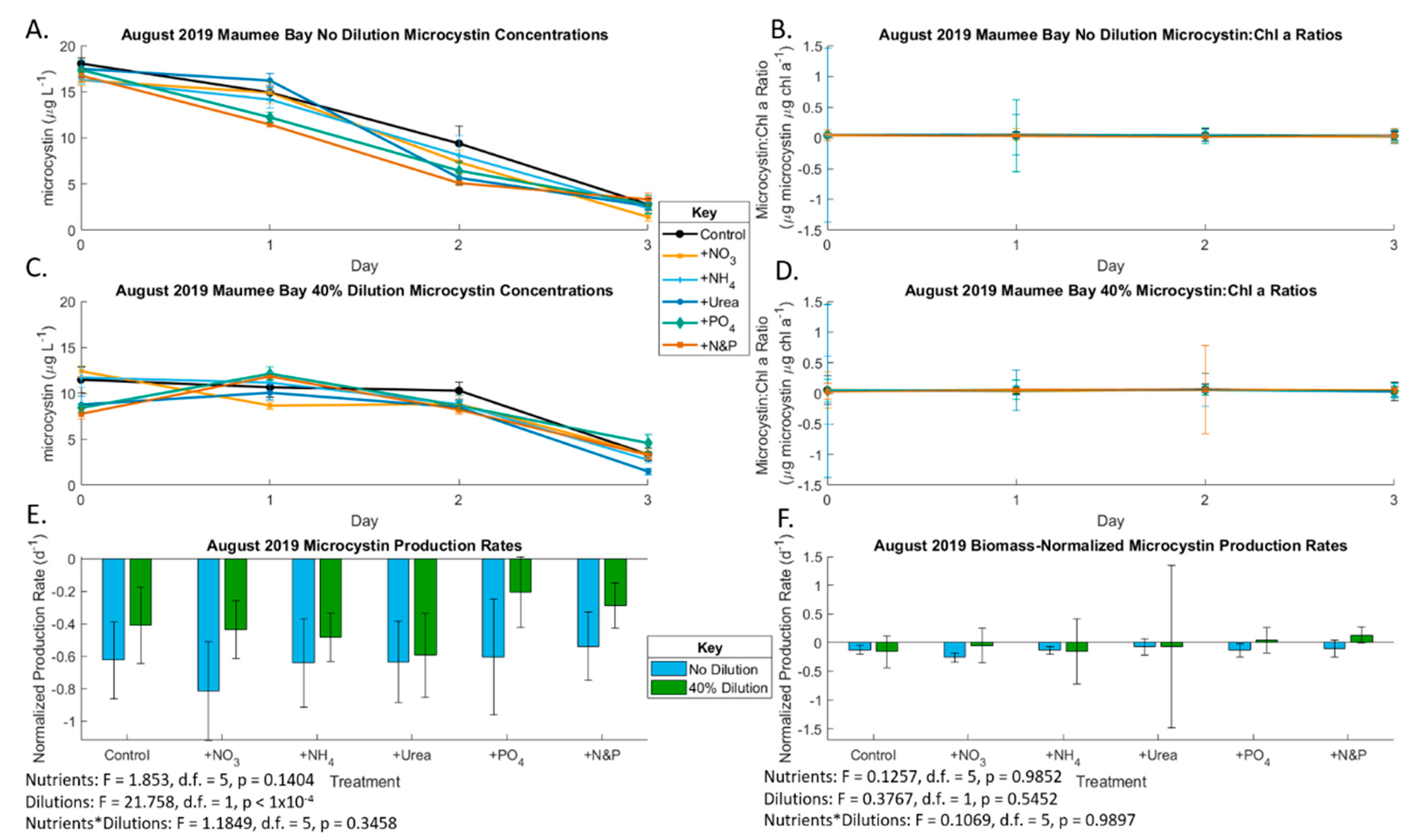 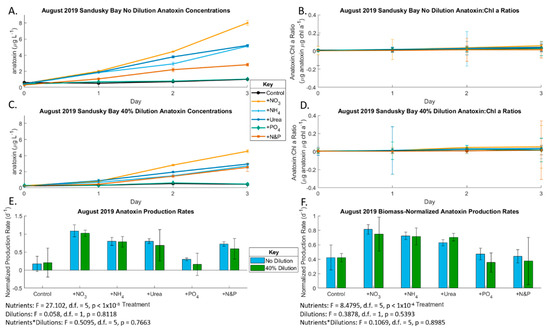 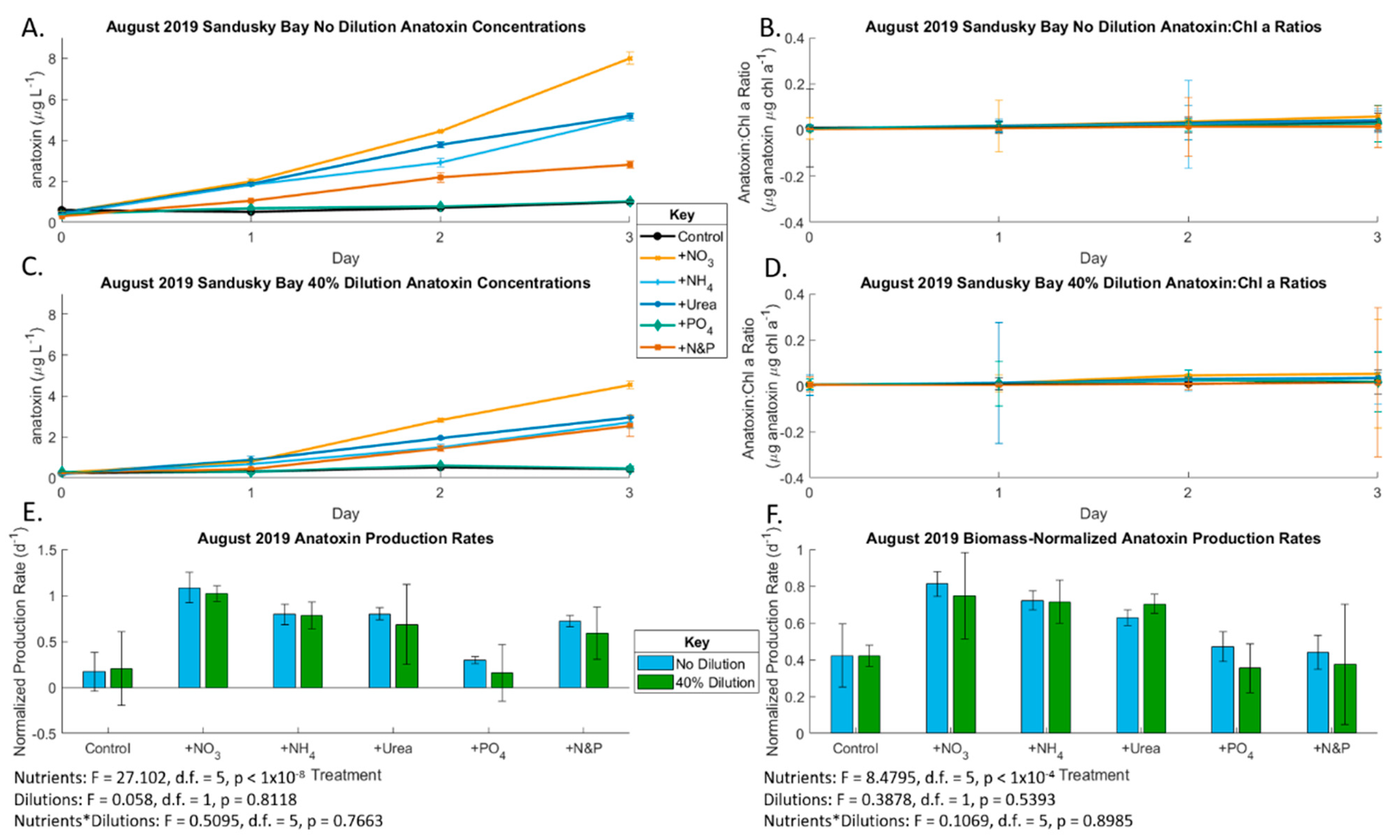 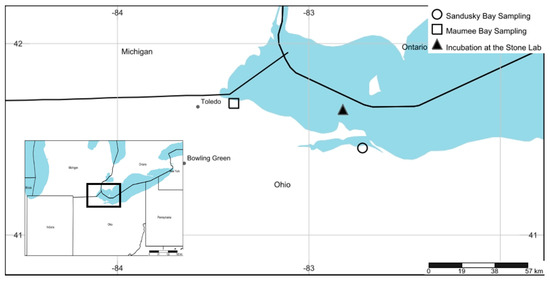 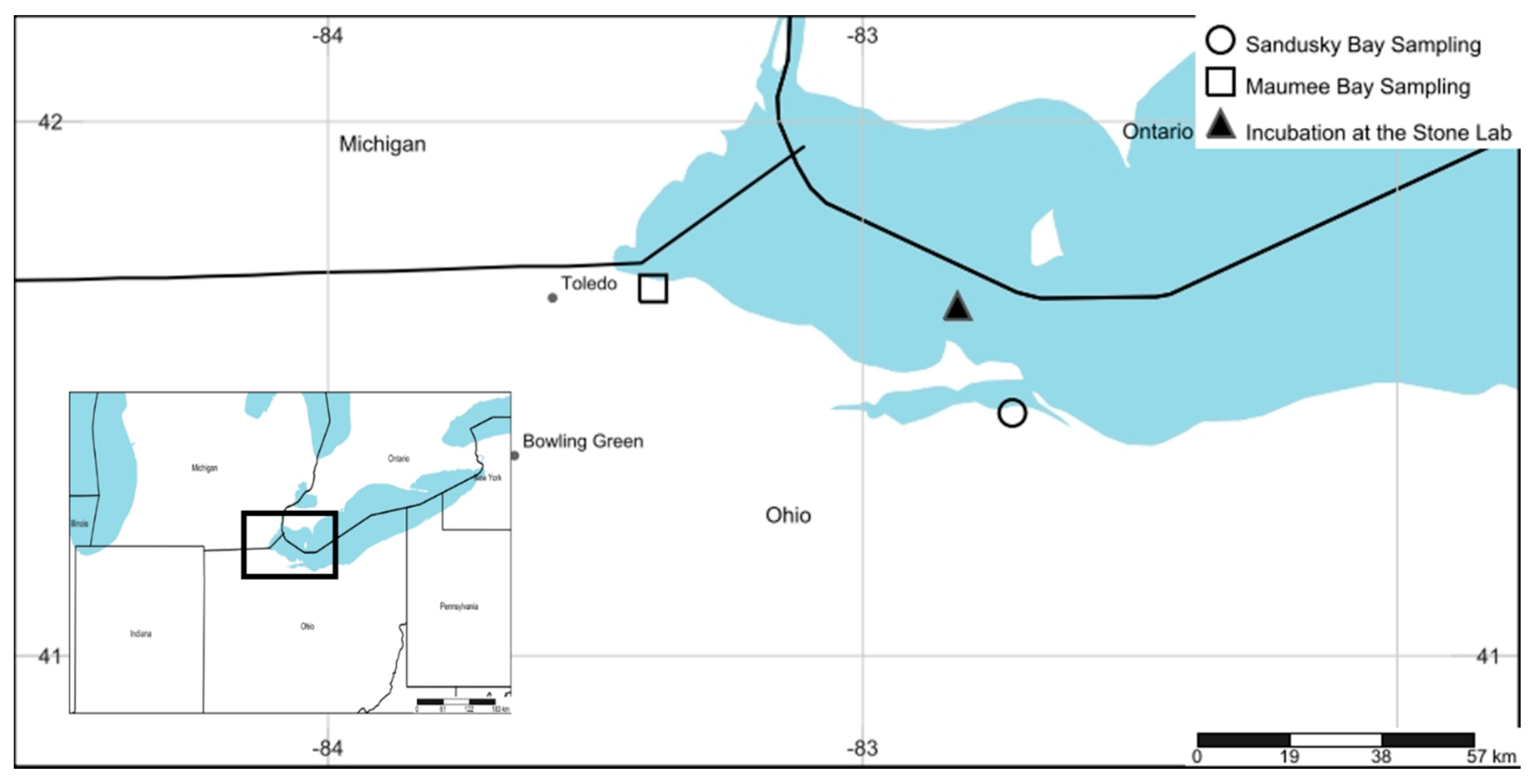