In the last decade, it has become evident that complex mixtures of cyanobacterial bioactive substances, simultaneously present in blooms, often exert adverse effects that are different from those of pure cyanotoxins, and awareness has been raised on the importance of studying complex mixtures and chemical interactions. We aimed to investigate cytotoxic and genotoxic effects of complex extracts from laboratory cultures of cyanobacterial species from different orders (Cylindrospermopsis raciborskii, Aphanizomenon gracile, Microcystis aeruginosa, M. viridis, M. ichtyoblabe, Planktothrix agardhii, Limnothrix redekei) and algae (Desmodesmus quadricauda), and examine possible relationships between the observed effects and toxin and retinoic acid (RA) content in the extracts. The cytotoxic and genotoxic effects of the extracts were studied in the human hepatocellular carcinoma HepG2 cell line, using the MTT assay, and the comet and cytokinesis-block micronucleus (cytome) assays, respectively. Liquid chromatography electrospray ionization mass spectrometry (LC/ESI-MS) was used to detect toxins (microcystins (MC-LR, MC-RR, MC-YR) and cylindrospermopsin) and RAs (ATRA and 9cis-RA) in the extracts. Six out of eight extracts were cytotoxic (0.04–2 mgDM/mL), and five induced DNA strand breaks at non-cytotoxic concentrations (0.2–2 mgDM/mL). The extracts with genotoxic activity also had the highest content of RAs and there was a linear association between RA content and genotoxicity, indicating their possible involvement; however further research is needed to identify and confirm the compounds involved and to elucidate possible genotoxic effects of RAs. View Full-Text
Keywords: cyanobacteria; algae; extracts; complex mixtures; genotoxicity; cytotoxicity; retinoic acids; microcystins; cyanotoxins; chemical analysis cyanobacteria; algae; extracts; complex mixtures; genotoxicity; cytotoxicity; retinoic acids; microcystins; cyanotoxins; chemical analysis
►▼ Show Figures 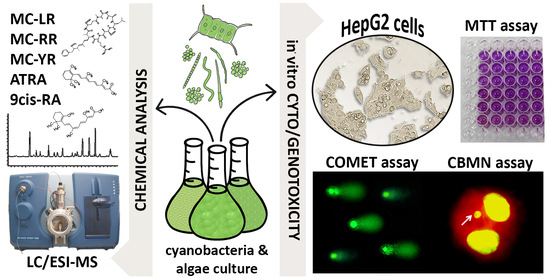