2.2. Percentage of Bacteria and Fungi in Alcoholic Hepatitis Patients

In the present study, we found an altered fungal pathway in patients with alcoholic hepatitis, predicted the diagnosis of alcoholic hepatitis using random forest model, and identified the association between fungi and bacteria in patients with alcoholic hepatitis. Superpathway of allantoin degradation in yeast was enriched in alcoholic hepatitis (Figure 2c). Allantoin is a product of guanine and adenine catabolism, which is a product of uric acid oxidation and can serve as a sole nitrogen source and be degraded to ammonia [9]. Allantoin can be used by both fungi and bacteria as carbon and nitrogen sources. However, the pathway for conversion of uric acid to allantoin has been lost in humans. Elevated uric acid has been reported to contribute to experimental and human alcohol-related liver disease [10]. The elevation of uric acid might lead to the enrichment of allantoin degradation in the gut microbiota. However, the potential contribution of allantoin degradation to the pathogenesis of alcohol-related liver disease warrants further analysis.
Fungi and bacteria share micro-habitats and engage in complex communications within the microbial community. Such relationship cannot be easily predicted based on the knowledge of cultured microorganisms, especially in the disease condition of alcoholic hepatitis. The metabolic crosstalk develops interdependently, which leads to co-occurrence patterns of fungi and bacteria. The correlation network of fungi and bacteria in our study revealed these co-occurrence patterns in patients with alcoholic hepatitis. Especially, a negative association was found between fungus Cryptococcus and bacterium Pseudomonas. Species in Pseudomonas such as Pseudomonas aeruginosa are also responsible for life-threatening infections in immunocompromised persons [11]. Since negative correlation exists between fungus Cryptococcus and bacterium Pseudomonas, treatment which targets the growth of Pseudomonas might increase the growth opportunity for Cryptococcus. Species within genus Cryptococcus are responsible for invasive fungal infection, which cause Cryptococcosis and present substantial therapeutic challenges [12]. Consistent with our study, Pseudomonas aeruginosa has been reported to inhibit the growth of Cryptococcus species by producing antifungal molecules pyocyanin and an extracellular quorum-sensing signal 2-heptyl-3,4-dihydroxyquinoline [13]. Thus, such correlations need to be taken into consideration in clinical practice during the treatment for bacterial or fungal infections.
Age and BMI have influence on the gut microbiome. In present study, there were three bacteria genera (Pseudoflavonifractor, Oribacterium, and Flavonifractor) positively correlated with age and one negatively correlated with age (Mitsuokella) (Supplementary Table S1). Two bacteria genera were positively correlated with BMI, Xanthomonas and Curtobacterium, meanwhile four were negatively correlated with BMI, including Sphingomonas, Phascolarctobacterium, Holdemania, and Megamonas (Supplementary Table S1). The correlation between age, BMI, and fungal genera was reported in our previous study, where Altemaria was found to be negatively correlated with age but no significant correlation was found between BMI and fungal genera [5].
There are several limitations of this study. First, due to the limit of sample availability, ITS and 16S rRNA sequencing were not performed in all enrolled patients with alcoholic hepatitis. Second, patients with chronic alcoholic hepatitis were lacking in our patient cohort. Third, the sample size in our study is small and correlations need to be validated in a larger and independent patient cohort. Finally, it is noteworthy that this correlation approach may not be representative of causal relationship in microbial ecology.
In conclusion, this study highlights the correlation between the gut bacteria and fungi, which needs to be taken into consideration in clinical practice. Further mechanistic studies of fungal and bacterial ecological interactions in alcohol-related liver disease are required.

Non-alcoholic controls and patients with alcohol use disorder were recruited from an alcohol withdrawal unit in San Diego, USA, and Brussels, Belgium, where they followed a detoxification and rehabilitation program. Non-alcoholic controls consumed less than 20 g alcohol/day. Patients with alcohol use disorder fulfilled the Diagnostic and Statistical Manual of Mental Disorders, Fourth Edition (DSM IV) criteria. Patients were recruited with self-reported active alcohol consumption greater than 60 g/day. Patients were excluded if they have diabetes, inflammatory bowel disease, known liver disease of any other etiology, or clinically significant cardiovascular, pulmonary, or renal co-morbidities. During the 2 months preceding enrollment, non-alcoholic controls or patients with alcohol use disorder did not take immunosuppressive medication or antibiotics. Alcoholic hepatitis patients were enrolled in different medical centers in Europe and North America that were part of the InTeam Consortium (ClinicalTrials.gov identifier number: NCT02075918) between June 2014 and May 2018. Patients were enrolled when they were admitted to the hospital. Inclusion criteria for alcoholic hepatitis were: (1) active alcohol use (>50 g/day for men and >40 g/day for women) in the last 3 months, (2) aspartate aminotransferase (AST) > alanine aminotransferase (ALT) and total bilirubin >3 mg/dL in the past 3 months, and (3) liver biopsy and/or clinical picture consistent with alcoholic hepatitis. Patients who received antibiotics, proton pump inhibitors, and laxatives were included. Exclusion criteria were: (1) autoimmune liver disease (ANA > 1/320), (2) chronic viral hepatitis, (3) hepatocellular carcinoma, (4) complete portal vein thrombosis, (5) extrahepatic terminal disease, (6) pregnancy, and (7) lack of signed informed consent. Alcoholic hepatitis patients were recruited from 10 different medical centers in North America and Europe. The protocol was approved by the Ethics Committee of each participating center and written informed consent was obtained from each subject from each center.

DNA was extracted from stool samples collected from 9 non-alcoholic controls, 41 patients with alcohol use disorder, and 81 patients with alcoholic hepatitis. DNA extraction and library preparation were performed as described previously [14]. Shotgun metagenomics sequencing was performed on Illumina HiSeq 4000 generating 150 bp paired-end reads. KneadData version 0.7.2 was used for quality control. Metagenomic Phylogenetic Analysis 2 (MetaPhlAn2) version 2.7.7 was used for the profiling of the composition of the microbial community [15]. The HMP Unified Metabolic Analysis Network 2 (HUMAnN2) version 0.11.1 was used for the profiling of microbial pathways [16]. MetaCyc database was used for microbial pathway analysis [17]. Each of the HUMAnN2 abundance output was normalized into relative abundance (the counts for each sample sum to 100). Linear discriminant analysis (LDA) effect size (LEfSe) was used to find the pathways, which were different between control subjects, alcohol use disorder patients, and alcoholic hepatitis patients [18].

16S rRNA PCR targeting the V4 region of the 16S rRNA gene was performed in 56 patients with alcoholic hepatitis, 15 patients with alcohol use disorder, and 10 non-alcoholic controls. These subjects were the same as the ones for ITS sequencing. DNA extraction and library construction were described previously [21]. Library was sequenced on Illumina MiSeq (Illumina) using V2 reagent chemistry, 500 cycles, and 250 bp paired-end reads. Furthermore, 16S sequence reads were analyzed using MOTHUR-based 16S rDNA analysis workflow as previously described [21].

We built random forest model to separate patients with alcoholic hepatitis from non-alcoholic controls and patients with alcohol use disorder using bacteria and fungi genera as detected by ITS sequencing and 16S rRNA sequencing. Extra-trees classifier was used to select 5 variables from bacteria or fungal genera. H2O platform (https://www.h2o.ai, accessed on 12 October 2020) was used to build random forest model. The dataset was split into training and test datasets (80:20). Stratified fivefold cross-validation was performed on the training set to choose the tuning parameters for the model.

We examined the associations between fungi and bacteria genera in alcoholic hepatitis patients as detected by ITS sequencing and 16S rRNA sequencing. Genera were excluded if they were found in less than 5 patients. Sparse InversE Covariance estimation for Ecological Association and Statistical Inference (SpiecEasi) was used to estimate the association between fungi and bacteria [22]. Meinshausen and Bühlmann (MB) method was used as the neighborhood selection framework, which generates local conditional independence structure predictions while solving p regularized linear regression issues [23].

Alcoholic hepatitis patients were enrolled in different medical centers in Europe and North America that were part of the InTeam Consortium (ClinicalTrials.gov identifier number: NCT02075918) between June 2014 and May 2018. The protocol was approved by the Ethics Committee of each participating center. 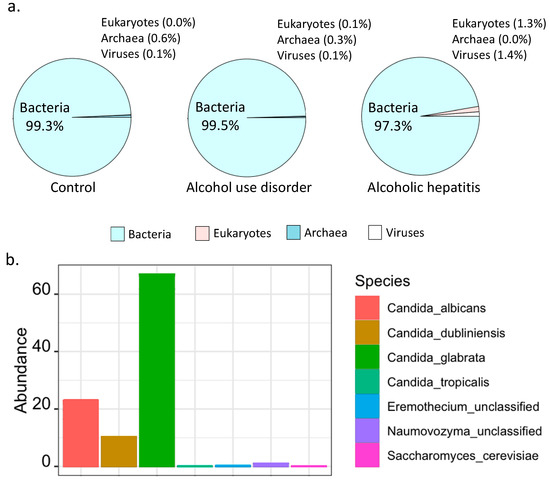 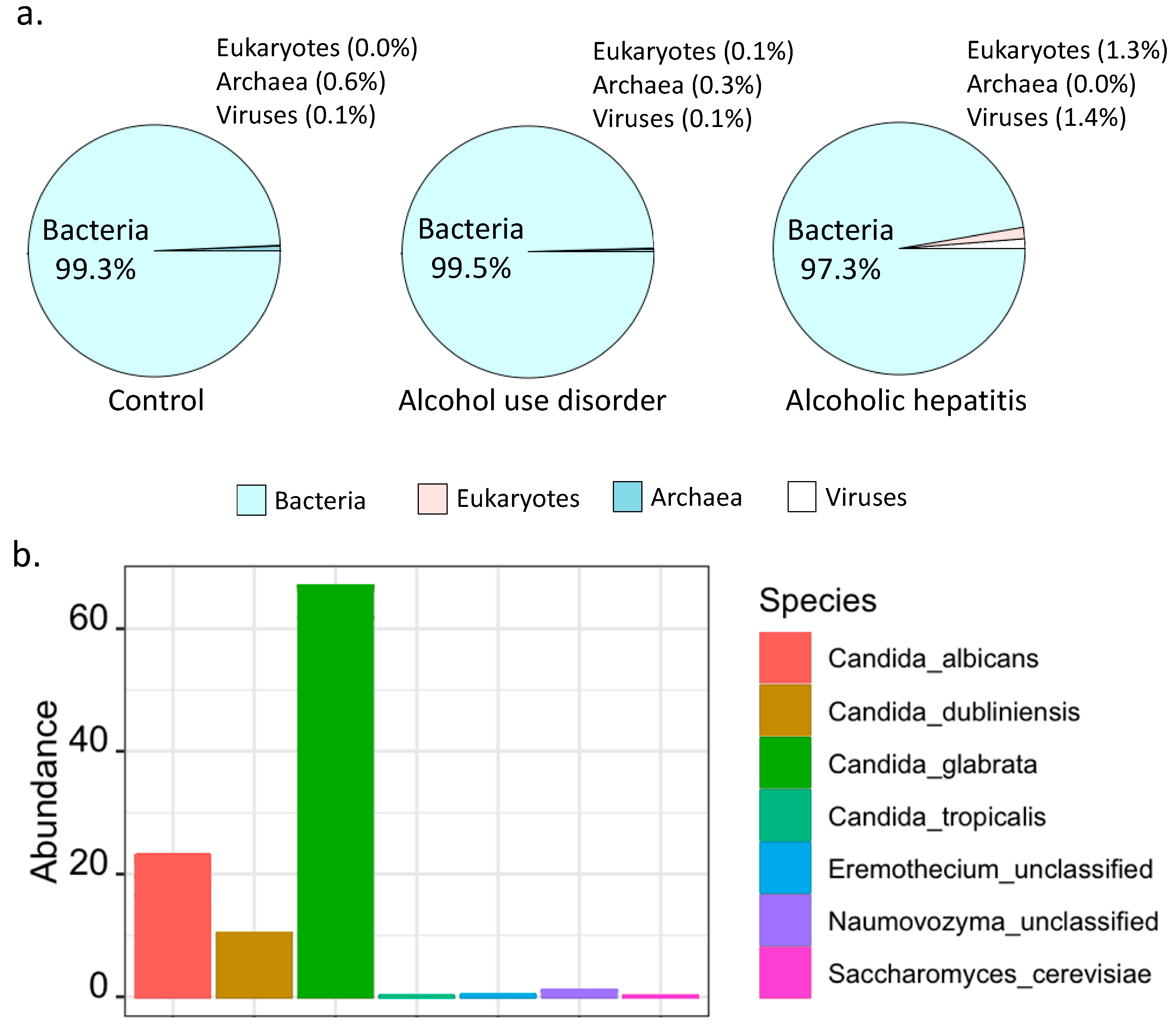 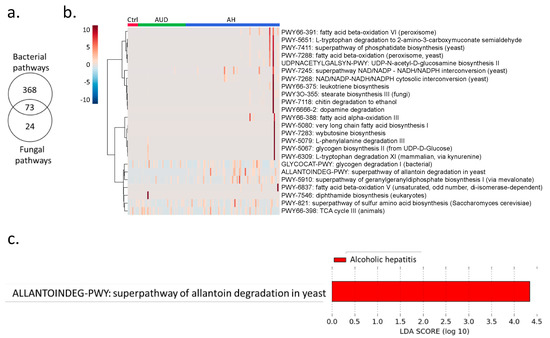 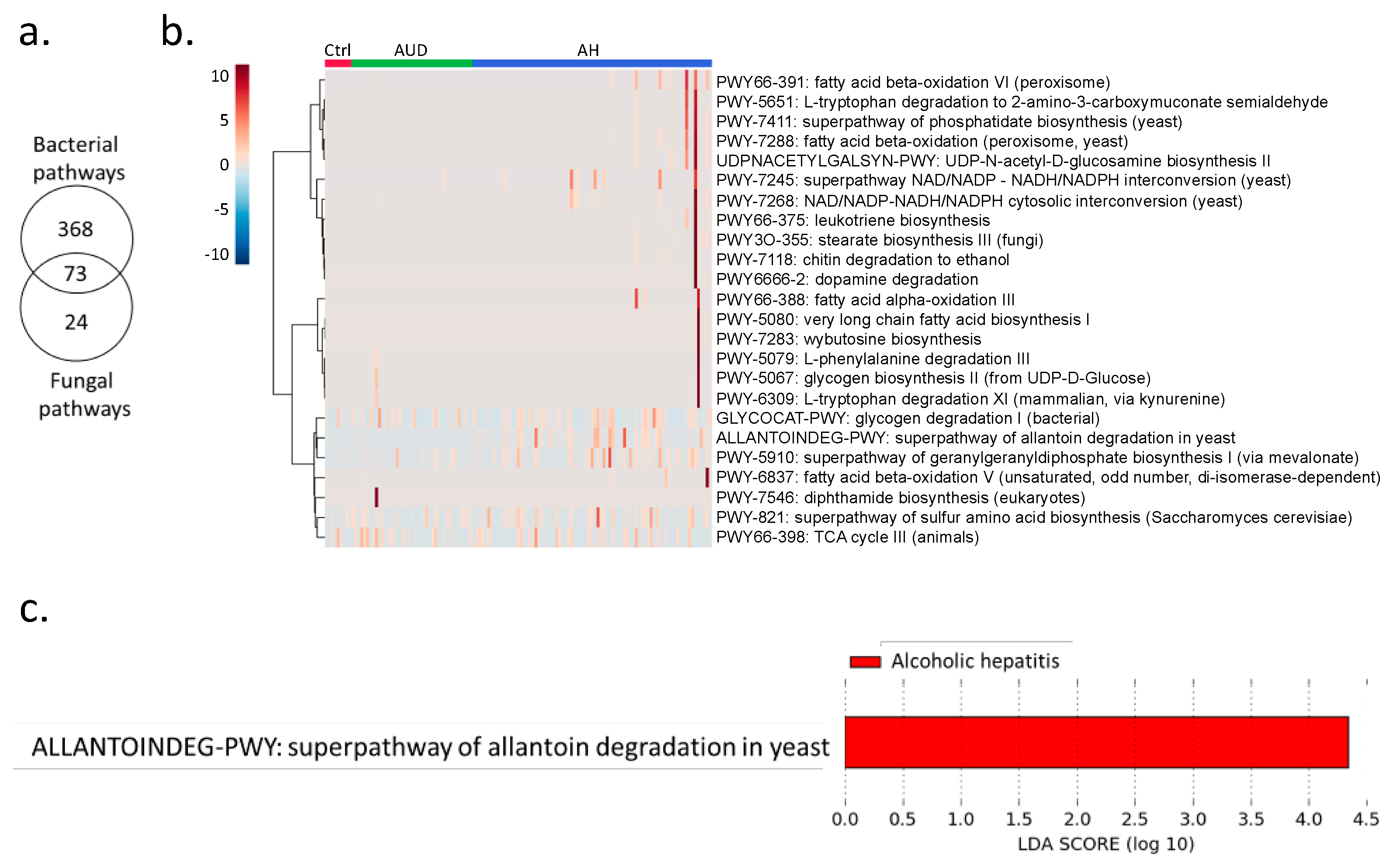 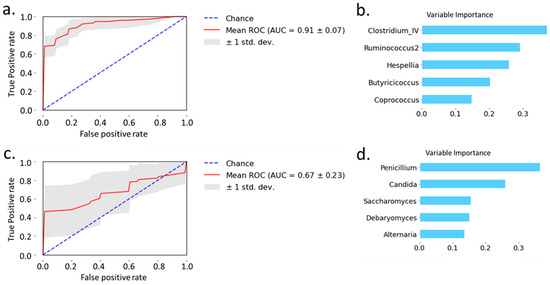 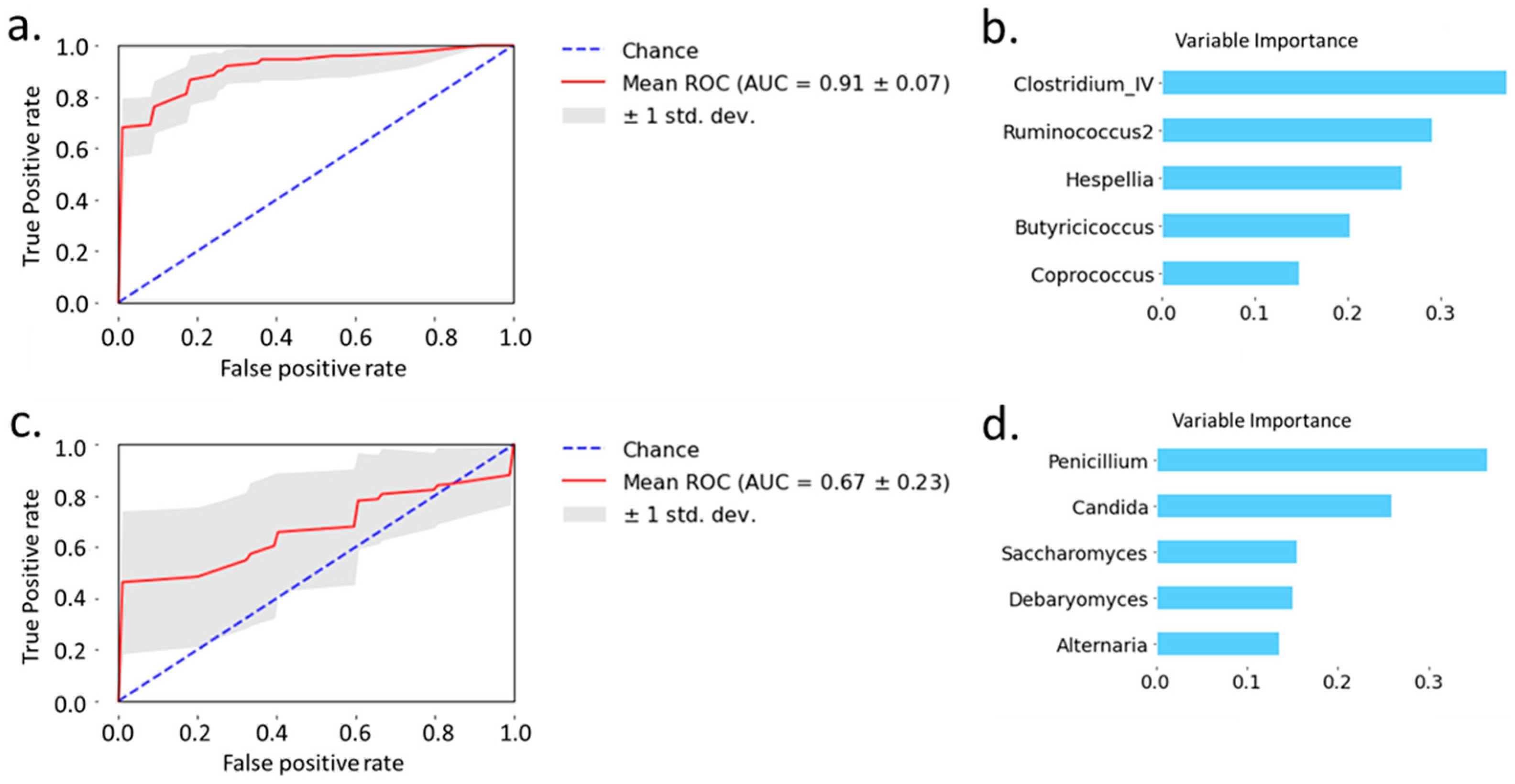 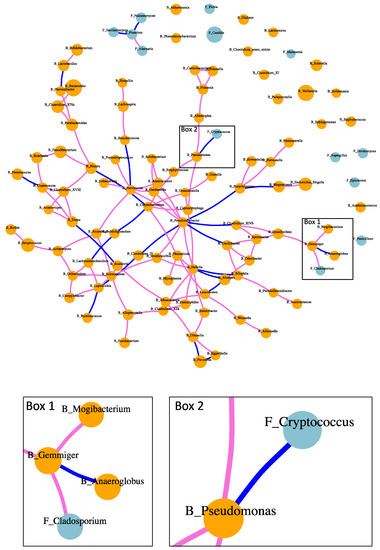 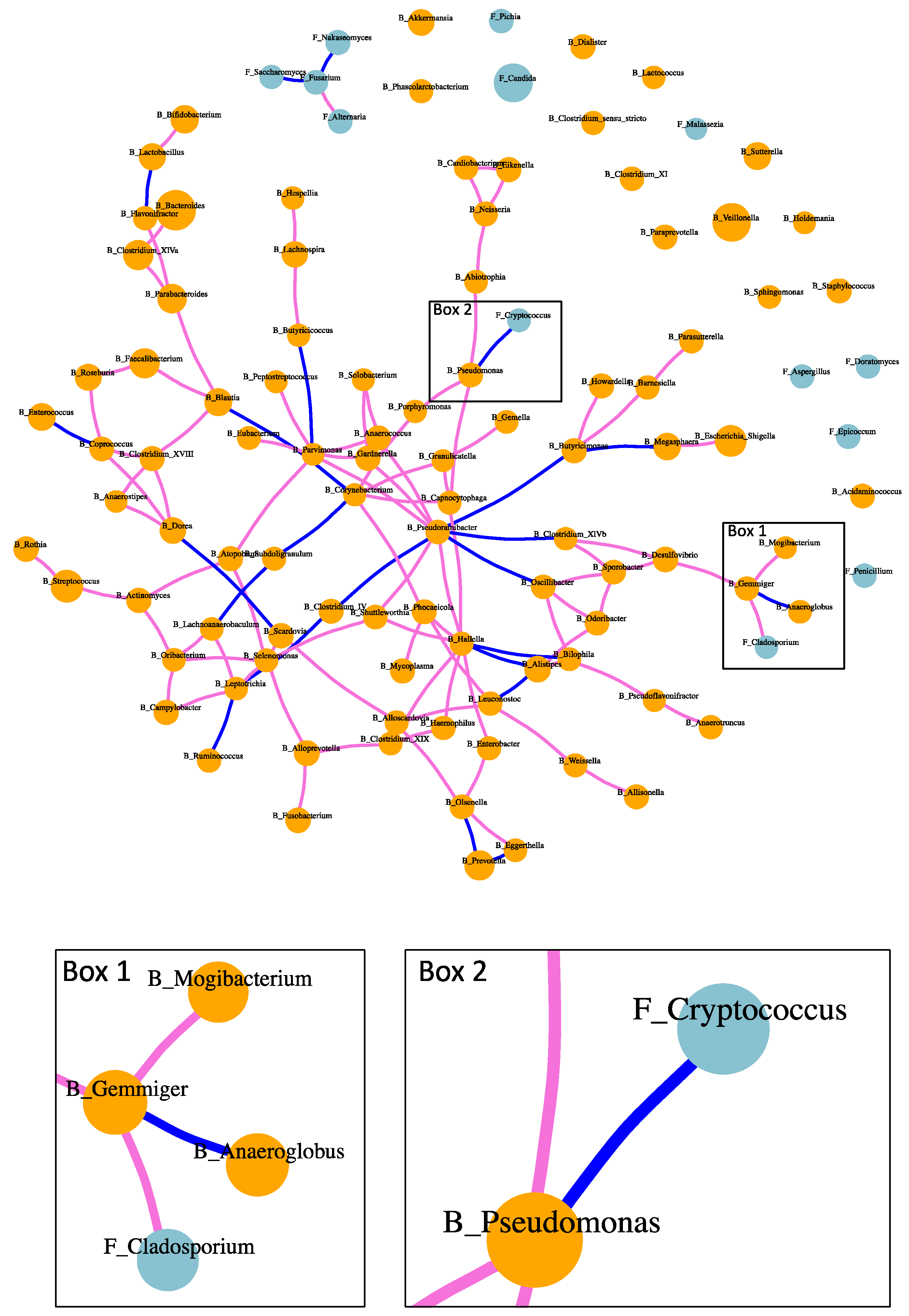 Table 2. Characteristics of alcoholic hepatitis patients for the metagenomic analysis.
Table 2. Characteristics of alcoholic hepatitis patients for the metagenomic analysis.
Note: Clinical characteristics of 81 alcoholic hepatitis patients. Values are presented as median and range in parentheses. The total number of patients for which the respective data were available is indicated in the first column. In blank cells, patients from the respective group were not counted to missing numbers. Fibrosis stages: 0 no fibrosis, 1 portal fibrosis, 2 expansive periportal fibrosis, 3 bridging fibrosis, and 4 cirrhosis. Lobular fibrosis: 0 no fibrosis, 1 zone 3 (centrilobular) fibrosis, 2 zone 2 + 3 (midzonal) fibrosis, and 3 panlobular fibrosis. Pericellular fibrosis: 0 absent, 1 present. Steatosis: 1 mild <33%, 2 moderate <33–66%, and 3 marked >66%. Mallory bodies: 0 absent and 1 present. Bilirubinostasis: 0 no, 1 hepato-canalicular, 2 cholangiolar, and 3 both. Ballooning: 0 occasional hepatocellular, 1 marked hepatocellular, and 2 none present. Megamitochondria: 0 absent and 1 present. PMN infiltration: 0 no, 1 mild, and 2 severe. Inflammation: 0 no, 1 mild, and 2 severe. PMN, polymorphonuclear infiltration. MELD: model for end-stage liver disease.
© 2021 by the authors. Licensee MDPI, Basel, Switzerland. This article is an open access article distributed under the terms and conditions of the Creative Commons Attribution (CC BY) license (http://creativecommons.org/licenses/by/4.0/).
We use cookies on our website to ensure you get the best experience. Read more about our cookies here.
Accept
We have just recently launched a new version of our website. Help us to further improve by taking part in this short 5 minute survey here. here.
Never show this again