Real Impact of Novel Immunotherapy Drugs in Cancer. The Experience of 10 Last Years
Next Article in Special Issue

The purpose of this study was to investigate the potential of a byproduct mixture derived from grapeseed and sea buckthorn oil industry to mitigate the harmful damage produced by ochratoxin A and aflatoxin B1 at hepatic and renal level in piglets after weaning. Forty cross-bred TOPIGS-40 hybrid piglets after weaning were assigned to three experimental groups (E1, E2, E3) and one control group (C), and fed with experimental diets for 30 days. The basal diet was served as a control and contained normal compound feed for starter piglets without mycotoxins. The experimental groups were fed as follows: E1—basal diet plus a mixture (1:1) of two byproducts (grapeseed and sea buckthorn meal); E2—the basal diet experimentally contaminated with mycotoxins (479 ppb OTA and 62ppb AFB1); and E3—basal diet containing 5% of the mixture (1:1) of grapeseed and sea buckthorn meal and contaminated with the mix of OTA and AFB1. After 4 weeks, the animals were slaughtered, and tissue samples were taken from liver and kidney in order to perform gene expression and histological analysis. The gene expression analysis showed that when weaned piglets were fed with contaminated diet, the expression of most analyzed genes was downregulated. Among the CYP450 family, CYP1A2 was the gene with the highest downregulation. According to these results, in liver, we found that mycotoxins induced histomorphological alterations in liver and kidney and had an effect on the expression level of CYP1A2, CYP2A19, CYP2E1, and CYP3A29, but we did not detect important changes in the expression level of CY4A24, MRP2 and GSTA1 genes. View Full-Text
Keywords: piglets; antioxidant effect; feed additives; mycotoxins; CYPs gene expression piglets; antioxidant effect; feed additives; mycotoxins; CYPs gene expression
►▼ Show Figures 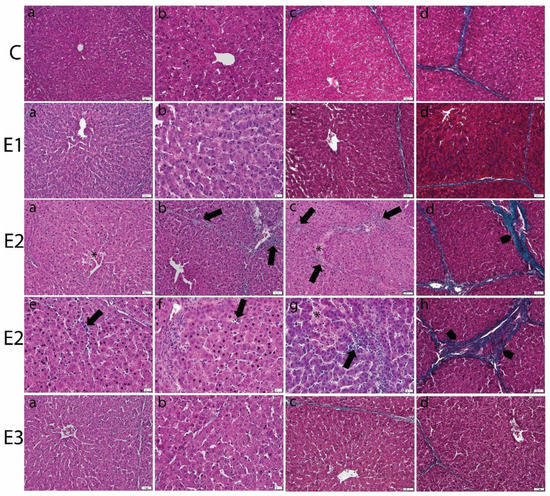