Toxic Effects of Fumonisins, Deoxynivalenol and Zearalenone Alone and in Combination in Ducks Fed the Maximum EUTolerated Level
Next Article in Special Issue

The Buzz about ADP-Ribosylation Toxins from Paenibacillus larvae, the Causative Agent of American Foulbrood in Honey Bees

The Gram-positive, spore-forming bacterium Paenibacillus larvae is the etiological agent of American Foulbrood, a highly contagious and often fatal honey bee brood disease. The species P. larvae comprises five so-called ERIC-genotypes which differ in virulence and pathogenesis strategies. In the past two decades, the identification and characterization of several P. larvae virulence factors have led to considerable progress in understanding the molecular basis of pathogen-host-interactions during P. larvae infections. Among these virulence factors are three ADP-ribosylating AB-toxins, Plx1, Plx2, and C3larvin. Plx1 is a phage-born toxin highly homologous to the pierisin-like AB-toxins expressed by the whites-and-yellows family Pieridae (Lepidoptera, Insecta) and to scabin expressed by the plant pathogen Streptomyces scabiei. These toxins ADP-ribosylate DNA and thus induce apoptosis. While the presumed cellular target of Plx1 still awaits final experimental proof, the classification of the A subunits of the binary AB-toxins Plx2 and C3larvin as typical C3-like toxins, which ADP-ribosylate Rho-proteins, has been confirmed experimentally. Normally, C3-exoenzymes do not occur together with a B subunit partner, but as single domain toxins. Interestingly, the B subunits of the two P. larvae C3-like toxins are homologous to the B-subunits of C2-like toxins with striking structural similarity to the PA-63 protomer of Bacillus anthracis. View Full-Text
Keywords: ADP-ribosylation; bacterial toxins; American Foulbrood; Paenibacillus larvae; honey bee disease ADP-ribosylation; bacterial toxins; American Foulbrood; Paenibacillus larvae; honey bee disease
►▼ Show Figures 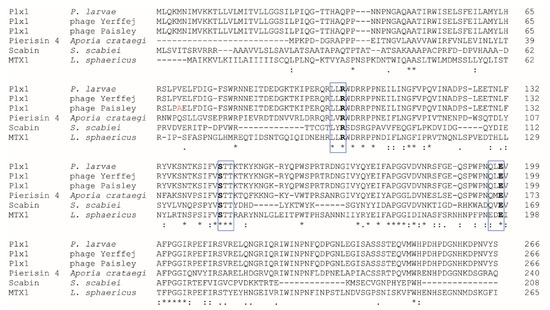