The Buzz about ADP-Ribosylation Toxins from Paenibacillus larvae, the Causative Agent of American Foulbrood in Honey Bees
Previous Article in Special Issue

Toxic Effects of Fumonisins, Deoxynivalenol and Zearalenone Alone and in Combination in Ducks Fed the Maximum EUTolerated Level

Toxic effects among fumonisins B (FB), deoxynivalenol (DON) and zearalenone (ZEN) administered alone and combined were investigated in 84-day-old ducks during force-feeding. 75 male ducks, divided into five groups of 15 animals, received daily during the meal a capsule containing the desired among of toxin. Treated animals received dietary levels of toxins equivalent to 20 mg FB1+FB2/kg (FB), 5 mg DON/kg (DON), 0.5 mg ZEN/kg (ZEN) and 20, 5 and 0.5 mg/kg of FB, DON and ZEN (FBDONZEN), respectively. Control birds received capsules with no toxin. After 12 days, a decrease in body weight gain accompanied by an increase in the feed conversion ratio was observed in ducks exposed to FBDONZEN, whereas there was no effect on performances in ducks exposed to FB, DON and ZEN separately. No difference among groups was observed in relative organ weight, biochemistry, histopathology and several variables used to measure oxidative damage and testicular function. A sphinganine to sphingosine ratio of 0.32, 1.19 and 1.04, was measured in liver in controls and in ducks exposed to FB and FBDONZEN, respectively. Concentrations of FB1 in liver were 13.34 and 15.4 ng/g in ducks exposed to FB and FBDONZEN, respectively. Together ZEN and its metabolites were measured after enzymatic hydrolysis of the conjugated forms. Mean concentrations of α-zearalenol in liver were 0.82 and 0.54 ng/g in ducks exposed to ZEN and FBDONZEN, respectively. β-zearalenol was 2.3-fold less abundant than α-zearalenol, whereas ZEN was only found in trace amounts. In conclusion, this study suggests that decreased performance may occur in ducks exposed to a combination of FB, DON and ZEN, but does not reveal any other interaction between mycotoxins in any of the other variables measured. View Full-Text
Keywords: ducks; fumonisins; deoxynivalenol; zearalenone; interactions ducks; fumonisins; deoxynivalenol; zearalenone; interactions
►▼ Show Figures 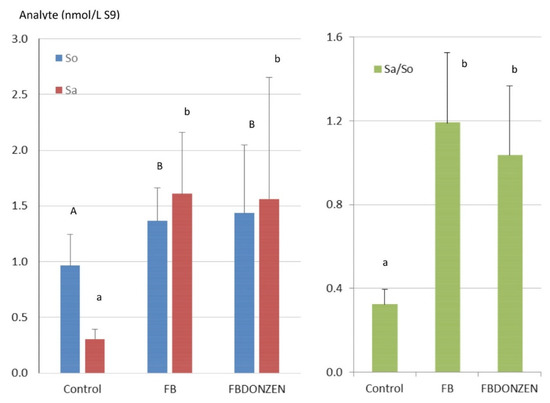