Animal Venoms and Their Components: Molecular Mechanisms of Action
Previous Article in Journal

Combination of Extrusion and Fermentation with Lactobacillus plantarum and L. uvarum Strains for Improving the Safety Characteristics of Wheat Bran
Previous Article in Special Issue

Cobra venoms contain three-finger toxins (TFT) including α-neurotoxins efficiently binding nicotinic acetylcholine receptors (nAChRs). As shown recently, several TFTs block GABAA receptors (GABAARs) with different efficacy, an important role of the TFTs central loop in binding to these receptors being demonstrated. We supposed that the positive charge (Arg36) in this loop of α-cobratoxin may explain its high affinity to GABAAR and here studied α-neurotoxins from African cobra N. melanoleuca venom for their ability to interact with GABAARs and nAChRs. Three α-neurotoxins, close homologues of the known N. melanoleuca long neurotoxins 1 and 2, were isolated and sequenced. Their analysis on Torpedocalifornica and α7 nAChRs, as well as on acetylcholine binding proteins and on several subtypes of GABAARs, showed that all toxins interacted with the GABAAR much weaker than with the nAChR: one neurotoxin was almost as active as α-cobratoxin, while others manifested lower activity. The earlier hypothesis about the essential role of Arg36 as the determinant of high affinity to GABAAR was not confirmed, but the results obtained suggest that the toxin loop III may contribute to the efficient interaction of some long-chain neurotoxins with GABAAR. One of isolated toxins manifested different affinity to two binding sites on Torpedo nAChR. View Full-Text
Keywords: binding sites; cobra venom; GABAA receptor; neurotoxin; three-finger toxin; nicotinic acetylcholine receptor; acetylcholine binding protein binding sites; cobra venom; GABAA receptor; neurotoxin; three-finger toxin; nicotinic acetylcholine receptor; acetylcholine binding protein
►▼ Show Figures 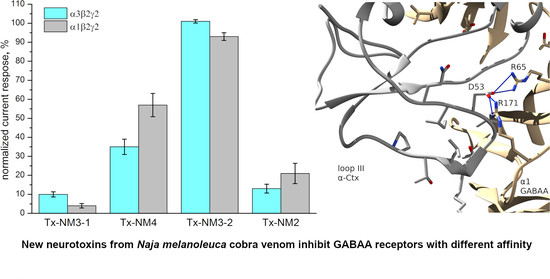